I've been really lucky with the teaching assistants I've worked with. Not least with Laura, who was my TA in Year 4 / Grade 3. She created such a buzz in the classroom, and was a great person to have around to talk things over with. She was wonderful with the students, incredibly energetic and self-directed, and especially a wonderful wizz with art and display. 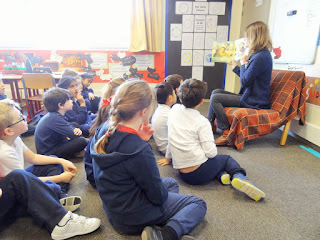 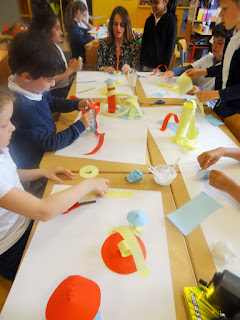 She wasn't so keen on maths, but even with that she was prepared to take on more and more; running our Which one doesn't belong? and estimation starters, and really getting into the spirit of things with groups.

The Prime Climb numbers are going up around the classroom too! Spot the 'deliberate mistake' @MathforLove pic.twitter.com/GUnKsPhqye
— Simon Gregg (@Simon_Gregg) November 25, 2014

I'm saying this in the past tense because... she's gone off to train as a teacher! She's back in England and really enjoying the course.

I offered to cast an eye over her first assignment, and found myself in there! Have a read:

Simon often provided his class with a hook to quickly engage and inspire them at the beginning of his maths lessons. He presented challenges as puzzles, number problems: the Fibonacci rabbit sequence for example, which one doesn’t belong and estimation games.

I had the pleasure of working with Simon for many years. His students would brainstorm numbers, some of them becoming methodical in their thinking, starting to see patterns and numbers everywhere! They would explore growing patterns using matchsticks, cubes, and Cuisenaire rods. Simon always asked the children open-ended questions and encouraged his class to explain their reasoning. They were taught to understand mathematical relationships and to develop and prove their solutions to problems in front of the whole class [...]

Additionally, his class were regularly asked to reflect on their learning, empowering them to self-assess and go deeper into their understanding and learning.

I became passionate about maths during my journey with Year 4. I am beginning to understand maths for the first time, a subject which I had previously misunderstood. I had only ever been exposed to rule-bound mathematics, did not understand, and so became that child who believed she was no good at maths. Simon taught me that, to understand maths, you need to be solving problems, that maths can be creative and fun. As a trainee teacher these are the values and strategies I want to develop and during my next placement.

I like the picture of my class that Laura paints. And that last paragraph especially makes me feel proud!

Email ThisBlogThis!Share to TwitterShare to FacebookShare to Pinterest
Labels: Laura