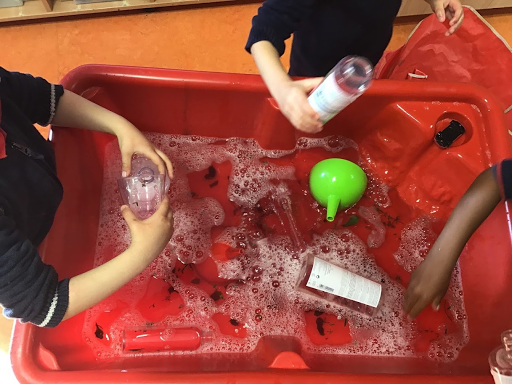 A short while back I was talking with Estelle and - I can't remember what the subject was - was it play schemas? - anyway, the subject of water play came up. It was something we both wanted to look into a little more.

We put water out, because it fascinates children. We think they must be learning if they're so active and so fascinated. Children will spend half an hour or more pouring and filling and emptying and much more. But what kinds of things are they investigating? What is interesting them in the water play?

I've been watching students play, asking myself what's going on, sometimes asking students but not getting much reply, and asking my colleagues.

If you haven't thought about this already, you might like to stop and think about what the fascination is with water play, before you've read other people's answers.

I thought I'd try Twitter too. I posted a photo of a student playing, and asked, 'What is it about playing with water that makes it so fascinating?'

What is it about playing with water that makes it so fascinating? pic.twitter.com/VqzyMLooGQ

We enter the world via the amniotic sac of fluid. Perhaps it reminds us of our beginning.

Once I'd made clear that this wasn't a rhetorical question, answers came flowing in.

Kassia tweeted: Filling and pouring seem to interest kids (and adults!) of all ages.

(Filling and emptying had been my first though too: satisfying to get to the end points - full and empty - and then to reverse the process. Maybe satisfying to so easily change the state of something into its opposite. Also, it doesn't have to be water: it can be rice or sand or wood pellets .)

Christopher replied: True. At least 40% of fun of home brewing is playing with water. Which, by the way, involves siphoning. Do these children have access to a siphon? Cuz if you're gonna make a tremendous mess, a siphon is a SUPER fascinating way to do it.

Aston too was clear, adults have the same pleasure: It’s not just children- I’m 38 and been working on our rink in the back yard. Nothing more satisfying then watching the water spread out and freeze.

Jack wrote: I think in part it hits a sweet spot between something that acts on its own and thus gives a sense of mystery and something that is controllable and thus reassuring. Also their is the slight drag of moving through it which is wonderful tactile feedback from the world.

The tactile feedback links in with what Steph had said: it's a sensory experience in a way that most of the day isn't. Estelle's impression too, putting her hands into the water, was about the sense of touch: how we felt the cold of the water entering it, and the warmth coming out.

David also commented on the meeting of opposites in water:

Maybe it’s because water is so paradoxical:

You can see it’s there, but you can see *through* it. You can feel it, but not grasp it. You can make mess with it, but the mess disappears. You can carry it, but it can carry things too.
Michael too saw an opposition: It is solid enough we can shape and change it but only for a moment, sending us back over and over again to try again.
Also it makes really satisfying sploosh sounds.

Westley thought: It's magical, like fire. We can control it but it also has a life of its own.

Justin also had a word about fire: It burns less than fire. 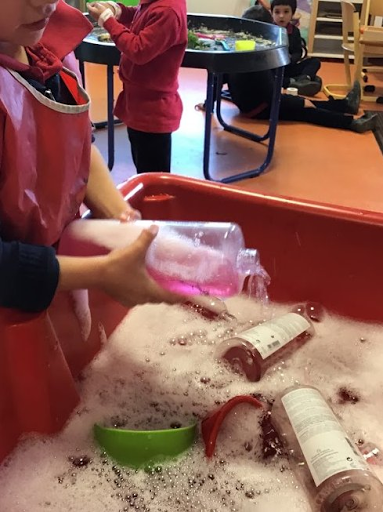 Watching students play should provide some of the answers. One of the things that seemed to fascinate this student, was how you could tilt the container just a little and the water would swill to the other end and start pouring. Shake it, and it comes out in all sorts of ways! 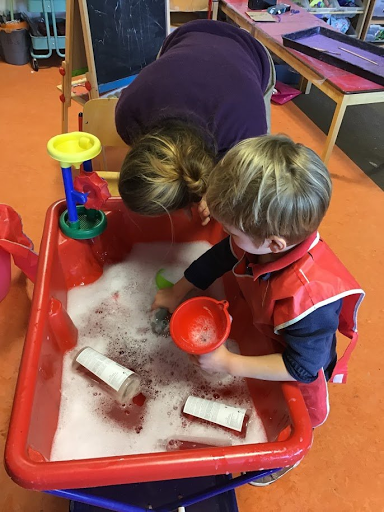 He spent about 40 minutes with this water. He liked the bubbles too. Sometimes, the bubbles made a kind of noise. Here's Estelle listening to it.

When I got home, I showed Pam some photos from the day, and asked her too what the fascination is in water play. She had a lot to say:

Water is just the most fantastic material. The way it has so many interesting properties, shapes, colours. The way the light passes through it. The way it twists as you’re pouring it. It doesn’t just go from one place to another. When you pour it, it catches the light, it sometimes has a smooth bent surface, it cascades, it’s in drops, it might fall in zigzags through the air.

There’s something mysterious about it.

If it’s in a transparent container, it’s different according to what side you put it into. There’s nothing boring about water.

And then there’s bubbles! Even in water without squeezy in, there’s a bubble when you drop something in.

It’s funny as well. You splash it, and it goes on your clothes but there’s no harm – it will dry out. Maybe a bit of water on the floor. But it’s just fun.

You’ve got something floating and then it sinks, you can experiment with it just by playing and having a laugh. It’s fun.

Amanda wrote: It's the one substance besides air that we have a lot of regular contact with, but it acts differently than air, in very interesting ways. When we go to the beach, it seems like access to a totally different world. It's incredibly powerful.

We don't think much about air because for the most part it's not visible or tangible to us. But water does cool stuff!

Poly tweeted: I am totally with this little one: watching water move is fascinating! Might be interested in this book by a marine biologist, all about our fascination with all things water and why it makes us happy. 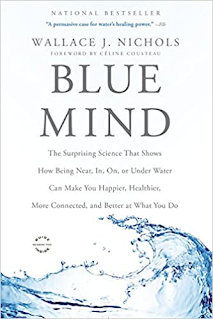 I am interested! It seems to me that the exploration of water, the experimenting and contemplating is carried by a comfort with water, the pleasure in being close to it. While we're enjoying water, waves of learning splash over us too!
maggie and milly and molly and may
went down to the beach(to play one day)
and maggie discovered a shell that sang
so sweetly she couldn't remember her troubles,and
milly befriended a stranded star
whose rays five languid fingers were;
and molly was chased by a horrible thing
which raced sideways while blowing bubbles:and
may came home with a smooth round stone
as small as a world and as large as alone.
For whatever we lose(like a you or a me)
it's always ourselves we find in the sea
e.e. cummings
MB talked about our attraction to water: And as well as all it does, it’s really good for us to touch the elements of nature. Water, sand, Earth, wood, pebbles etc. Think we are intrinsically drawn to it.

Sarah also spoke about the emotional power of water: When my son was born,he was always unsettled and barely slept. He didn't sleep through the night for four years. Water was the one thing that calmed him.He would immediately relax and was soothed. He's now 19 and still loves water. Water can be restorative as well as fascinating

"From one million miles away our planet resembles a small blue marble; from one hundred million miles it’s a tiny, pale blue dot. “How inappropriate to call this planet Earth when it is quite clearly Ocean” Arthur C. Clarke, quoted by Nicole. 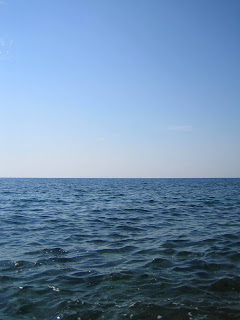 All this has of course made me only more keen to have water play as a big part of our provision for our 3, 4 and 5 year olds. This week we've had red strawberry-scented water, (a bit too) blue peppermint-scented water 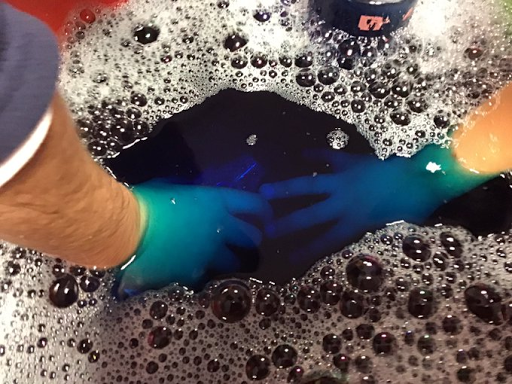 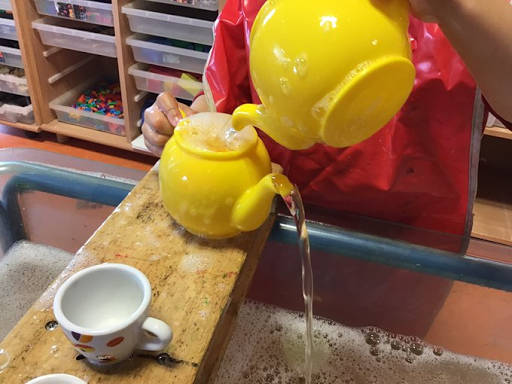 It's also made me want to watch closely, an see what it is that children are attending too, and experimenting with.
Posted by Simon Gregg at 05:31 1 comment:

Y is the youngest three year old in my class. Though she's becoming more comfortable at school each day, she is still tentative about joining in activities with other children, still holds back from lots. The other day she and I were in front of the big tin cans that hang so they can be hit with bamboo beaters. She watched as I beat out a rhythm on a can - and when I then held the beater out to her, she ran away.

But, when it comes to mathematics, she is in her element. She has a kind of exuberance, of joy playing with numbers and shapes.

I first noticed it when I'd put some Numicon out back in September. Steph - always upping the opportunities for mathematics! - added some jelly numbers. I was amazed when Y quickly matched up the Numicon pieces and the numbers, and seemed to be really enjoying it too! 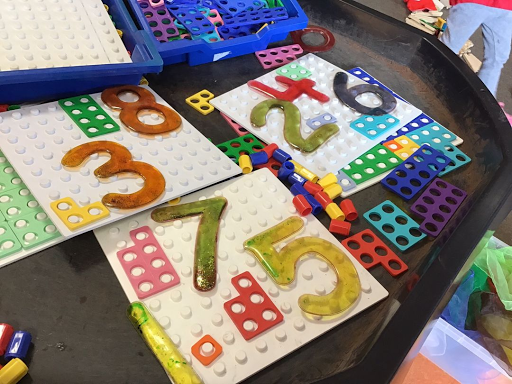 Doing some mathematics is one of the places Y seems to feel really comfortable alongside other students. Here she is on the left, arranging some of the dot stones:
And here she is in October with the same student, sorting the magnetic Numicon-type shapes: 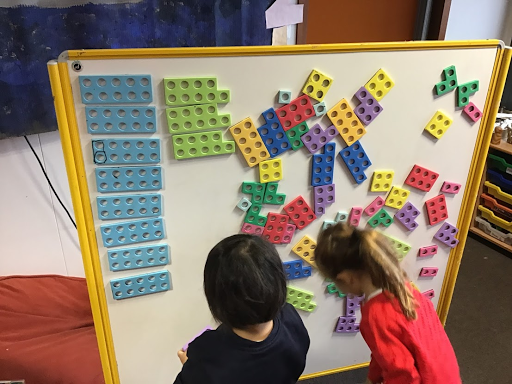 I'm really pleased that she is happily sociable in her mathematical play. For her, but also for the others - to spread the mathematical joy!
Later in the day, she was at the board with another student, this time putting the pieces up and calling out the numbers as they did. Steph suggested they add the word 'Splat' which seems to give it a bit more drama, making it into more of a game:
We've played this game quite a lot. Now, in November, she's changed it to be 'Splat, two fives!' as she puts a pair of  pieces up with both hands. When it's 'Splat! Two twos!' it makes her laugh.
It's evolving all the time. I brought a pen out and wrote some of the numbers yesterday, and she took the pen from me and enjoyed doing that too: 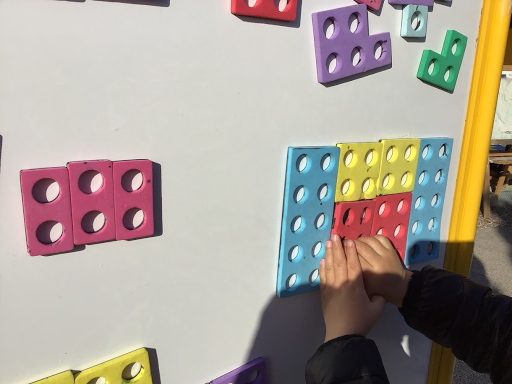 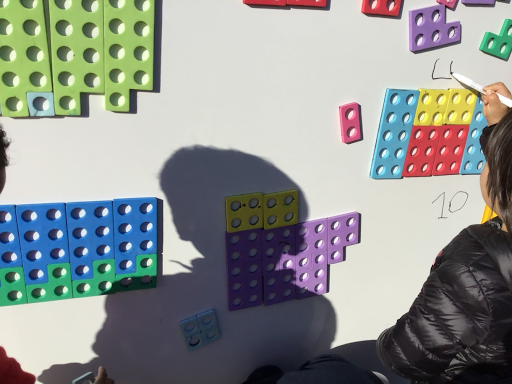 The idea of equality came up in the Numberblocks episode we watched, and as she was doing this, I was saying how the six and the four together are the same as, are equal to the ten. This might be something we develop more, depending how much it interests her.

Some thoughts:
Posted by Simon Gregg at 13:46 No comments: