DW says he was playing noughts and crosses in the car, and then wrote numbers on the paper. He brought it in to me, a 10 cm square: 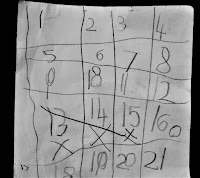 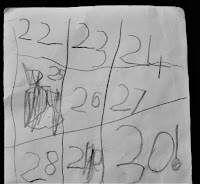 It lay on my desk for a day or two, then we showed it to the class. I asked them what they noticed about it. We wondered about the 17. We counted it through. Then I did what I often do when someone originates something - I asked the children, on similar-sized pieces of paper, to make their own, but different grids. There was a variety, lots with the grids continuing on the reverse side: 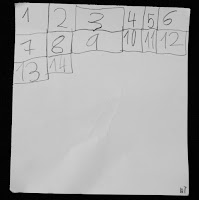 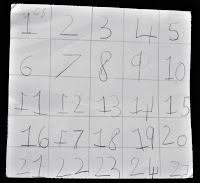 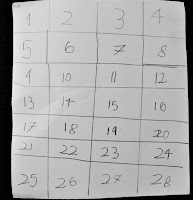 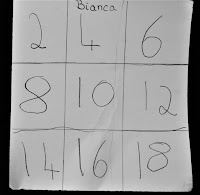 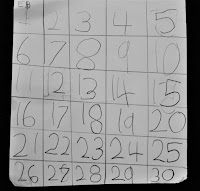 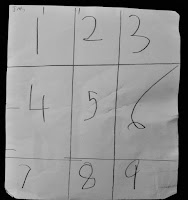 I was impressed with how careful the children had been, lots of them choosing to use rulers (I hadn't mentioned them). It seemed like the few that still needed to practice writing their numbers could get on with that, and the others could decide on a layout, a pattern, decide how far to go.

It took a few days for it to really sink into my head that all the children seemed to be enjoying doing this. There was an element of play, of choice. Grids could be large or small. They could even be different, like Bianca's even number one. In the Primary Years Program of the International Baccalaureate, inquiry is one of the key learner attributes we're looking for. For 5 and 6 year olds, this playful exploration is inquiry. There was a constraint, it should be a grid, but otherwise the field was open.

I felt like we needed to be celebratory, high-spirited in this play, so next time, I had large paper squares.

Another important learner attribute in the PYP is being a risk taker. When we looked at what had been done so far, I took a little more time on the ones that had been more different - the ones where the numbers weren't simply in counting order. If people were going to go new places, divergence would help. 'You can start in a different place, or from a different number, or try a different pattern of numbers.'

A lot of children wanted to get up to big numbers. It took more than one session. So, while next day some finished, I sat with the others in front of the whiteboard. I drew a 4x4 grid and invited ways of filling it in. There were these: 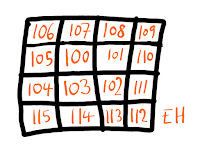 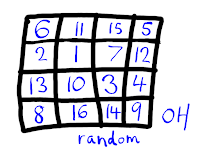 We all contributed to the "random" one.
Then I asked the students to draw a 4x4 grid on little whiteboards and fill it in somehow: 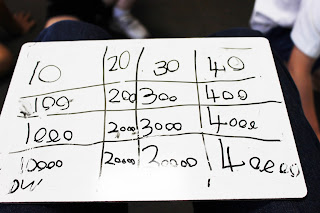 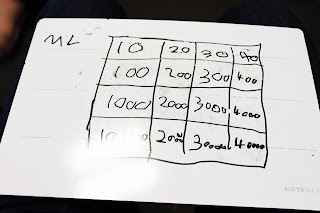 These last two amazed me, capturing something I'd wanted to explore with the students. I'd just read What comes after nine? by  in the latest Mathematics Teaching issue, which looks at how this kind of table gives an enormous amount of naming power to students. Modifying it slightly, I put it together with 3 others to make a #wodb: 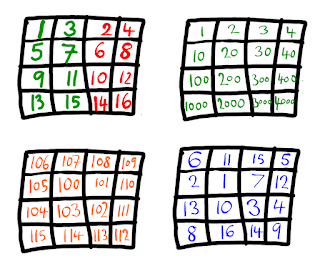 which we duly answered: 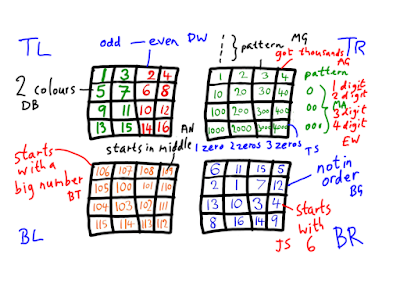 With the big grids, I was really impressed that the students who are sometimes the least confident in maths kept going on their own and went much further with numbers than I'd seen them go before. And of course there's the variety. (I wonder if our hopscotch work helped with this?) They're up on the wall now:

And the other K3 class is getting going too:

We've given them a middle-sized piece of paper and asked them to make one more grid at home.

And the K2 children have caught the grid bug: 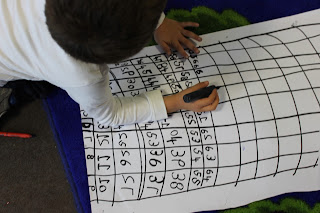 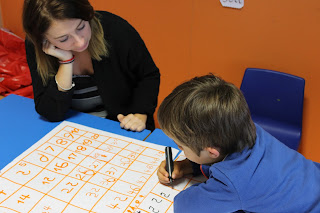 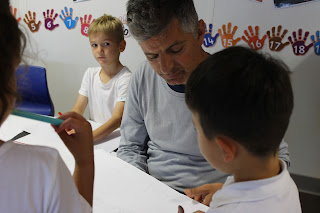 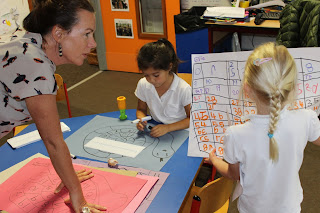 ...And while I've got a moment, another thing from Friday.

I mentioned just now in the last post (two coming along at once!) that one of the things on Mike Flynn's list of generalisations is:

We'd talked a lot about ten, explored it in all sorts of ways. Presented an assembly about it. Made a book about it:

But the way ten figures in organising our number system hadn't come up. I got a couple of my students to make this staircase, with just minimal help: 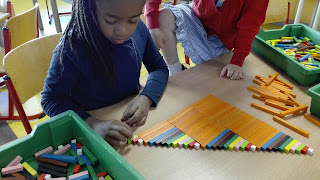 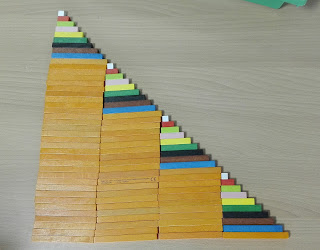 and looked at it a few times on separate occasions: 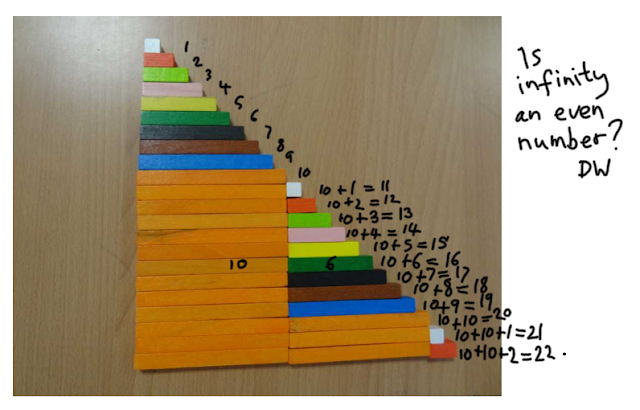 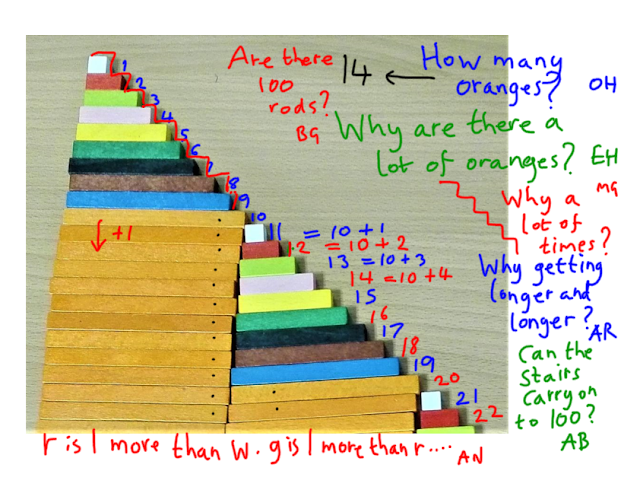 EH's question, Why are there a lot of oranges? - and the fact that no-one had any response to it, made me feel that there was no real feeling yet of the ten-ness of our numbers. I resisted the temptation to say anything in answer.

I'd read Alexandra Fradkin's post, 3-digit numbers are tricky! Part II, and I've been pondering it.

Our number system is, as you know, just one of many. The Romans system I, II, III, IV, V, VI... carried on in Europe until and beyond the time that Fibonacci introduced the Hindu-Arabic system that we use. There is a lot of logic to our system, but it's also one human-created system among many possible ones.

So there's no reason children should be able to anticipate how it works, without orientation of some kind. But then again, there is such a powerful logic to it, that, given the orientation we're given, we can all write numbers we've never seen before.

I've approached it Alexandra's way before. It's quite impactful to get it wrong, to see your first assumptions weren't correct. I also think it's enjoyable to get things right.

What did come up was, when I asked the class to bring in something about ten, BG brought in this: 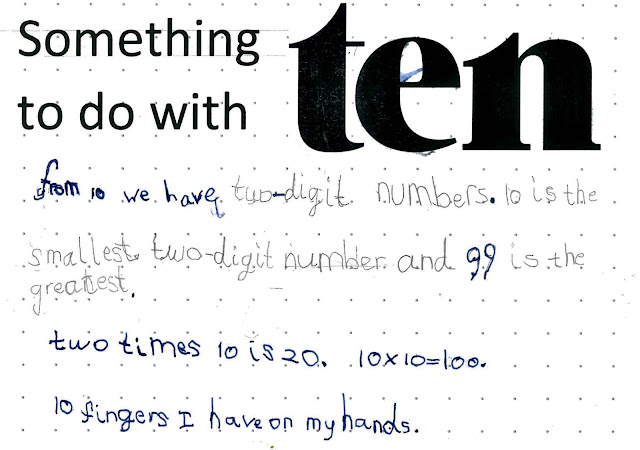 The idea of 2-digit numbers seemed to me to be a key that could unlock it all. 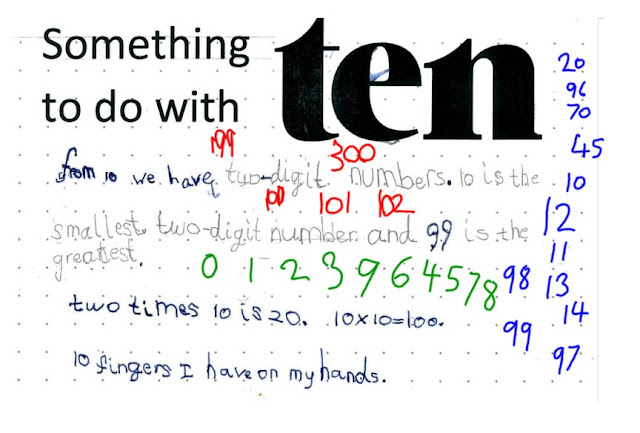 This seemed like the moment to get the little whiteboards out and ask everyone to cross that threshold from two- to three-digit. Someone had proposed a hundred-and-one as 101, so it was going to be manageable for everyone. 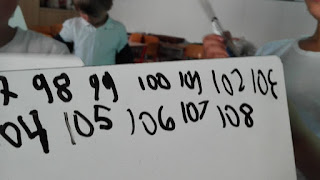 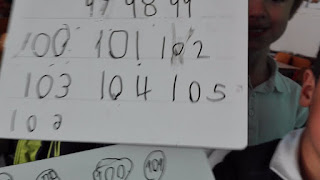 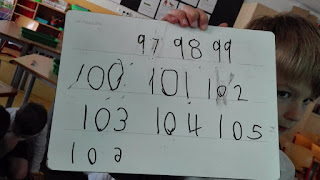 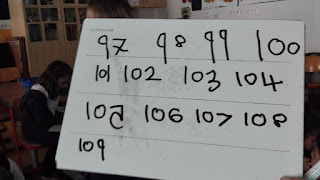 There was a good feeling about this, like we'd just crossed a new boundary to explore new territory together.

But though we'd crossed this river, there was no reason to think that meant the base ten system was instantly understood. How to help with that? What would you do here?

We'd looked at the hundred square lots. I use this online one. 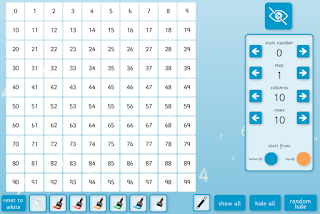 I thought of Dienes ("Base ten") apparatus, which embodies our number system so well. 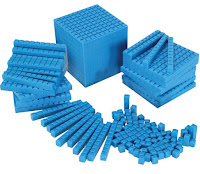 And wondered if we could combine the two, to give a sense of the economy of our number system.
I asked the class in pairs to stick a hundred square behind our hundred square frames, and then to fill up the square up to a particular number.

I know; this is a bit of a “I, We, You” lesson, rather than a  “You, Y’all, We” one. It was an experience that I thought would help to throw into the pot, for seeing numbers in terms of tens and ones. But maybe - no, I'm sure - there's a better way. What are your ideas about this?

I feel like with all our work on making sense of numbers, and now that the class are more independent in their writing, it's maybe time to start a kind of journal entry on this, something like 'What I know about numbers. What questions I have.'

I'm interested what they would say, whether this will be too big a challenge at this stage...
Posted by Simon Gregg at 10:57 1 comment: