The #elemmathchat conversation is always at the slightly difficult hour of 3 am. here in France. I did set my alarm this Thursday, and did manage to wake up to turn it off, but that's as far as it went. So I caught up with it on Storify and favourited and commented a little. Here's one I liked.

@MarkChubb3 Everyone should have a ladder of abstraction handy. https://t.co/9j0XlN5xMD
— Simon Gregg (@Simon_Gregg) October 23, 2015

@Simon_Gregg Dividing fractions... How many understand what's going on here? Some don't see need for concrete if Ss can get an answer
— Mark Chubb (@MarkChubb3) October 24, 2015

Tracy quoted this from Making Sense in her blog post recently:


“In traditional systems of instruction, teachers are asked to provide feedback on students’ responses, to tell them whether or not they are right…this is almost always unnecessary and usually inappropriate. Mathematics is a unique subject because…correctness is not a matter of opinion; it is build into the logic and structure of the subject…There is no need for the teacher to have the final word on correctness. The final word is provided by the logic of the subject and the students’ explanations and justifications that are built on this logic” (Hiebert et al. 1997, 40).

It's a bit like Gattegno had it in his picture I've shown before:

This is especially true when the affordances of a manipulative and the way the student has been asked to explore it give the student instant feedback.
Although Gattegno cuts a slightly odd figure to us now, and his "lesson" is evidently a kind of performance that is at the end of a series of lessons, because he's at the root of how (and that!) we use Cuisenaire rods, we owe him a lot. This second clip is where things really start to get going:


(I wonder, how did Gattegno make that link between "one third of" and x 1/3? Also, how did he get the children comfortable with thirds? I find that's often puzzling for children.)

I feel that his diagram isn't quite right. I want to put conversation into it. Gattegno is talking with the students a lot. But, for me, it's especially student to student conversation - which is notably absent in this video, but needn't be for Cuisenaire rods to be used to give students access to the logic of maths. My diagram would look more like:
I love how Gattegno goes off from the rods into writing equations about 27. Again, this can be done with students making their own equations.

Caroline Ainsworth, following Madeleine Goutard's lead, gets students to write lots of equations about a number. You can see how this could follow on from some version of that 27 discussion:

Here's a page of a child's writing from Goutard: 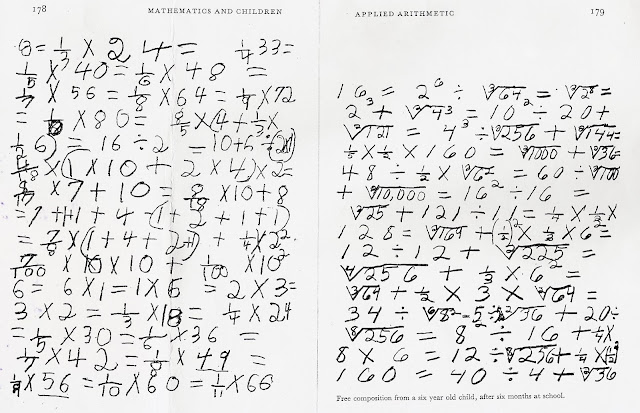 This seems a really fruitful direction, that I'd like to make my own. I've headed off that way before, but there's a lot further to go.

And have I answered Mark's question? I'm not sure. But I was struck recently, how at Toulouse's "Nuit des Chercheurs", how even a University Professor, Arnaud Chéritat, and his students are using 3D printed models to understand something that's too illusive without something to handle and look at:

& these are the models Arnaud Chéritat made to understand how to turn a sphere inside out! (https://t.co/havucDig4Z) pic.twitter.com/EpfSdioxjn
— Simon Gregg (@Simon_Gregg) September 26, 2015 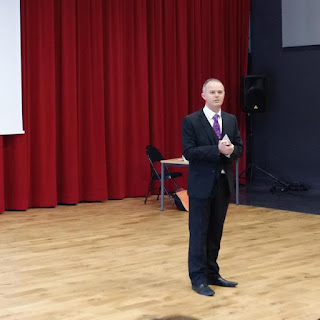 And later - Russel's initial reflections
Posted by Simon Gregg at 02:26 No comments:

As part of our Practical Pedagogies Conference, Rosy and I ran a workshop on Big Questions and Philosophy for Children.

It's been great working with Rosy to prepare this session, discussing our approaches, visiting each other's classrooms. 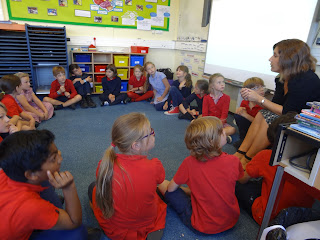 She uses a lot of playful activities that help everyone to participate in philosophical thinking, and I've been learning lots from what I've seen.
Here's the slideshow we used for the session: 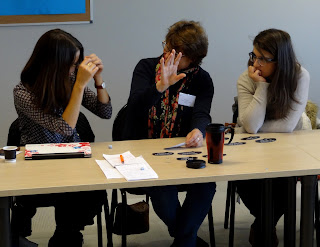 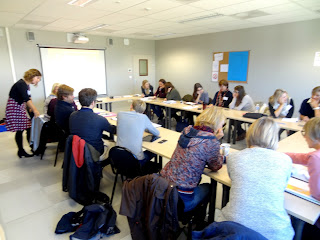 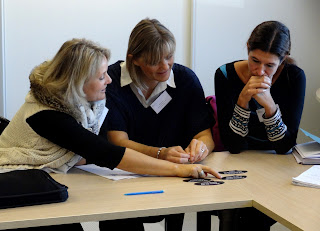 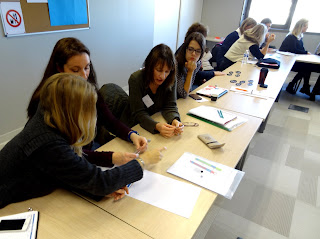 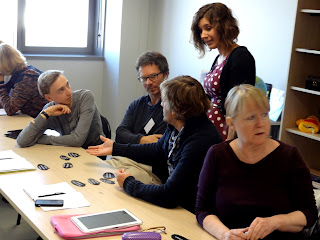 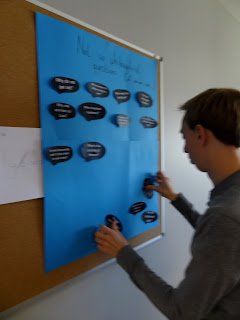 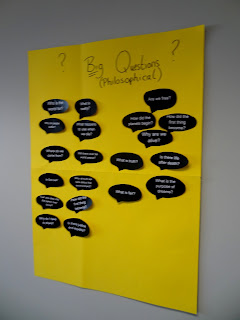 And discussing which big questions could come from a reading of Anthony Browne's Voices in the Park: 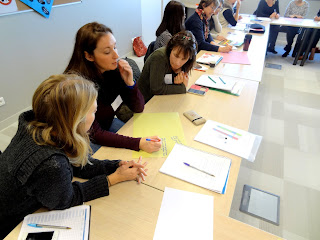 Here are some of the ideas we came up with. There were so many great ones!

(- This question, although perhaps not a "big" question, leads on to how Anthony Browne is using so many visual metaphors in the book. And  understanding of metaphor in stories unlocks all sorts of potential for discussion of them.)


It's not easy coming up with questions, but ultimately we'd like a situation where the students themselves can generate questions from a stimulus, and decide which one to discuss!
Posted by Simon Gregg at 02:24 No comments:

Valuing Talk in the Classroom 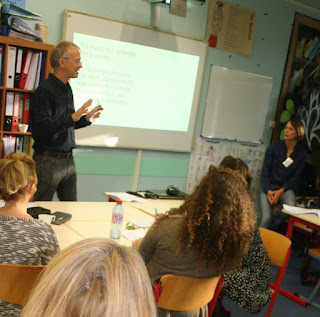 It's been a great experience working with Estelle on creating our Practical Pedagogies session. We wanted to look at ways that we encourage children to talk that enhance their learning. And, not only that, we wanted to look around and see how other people were doing it. 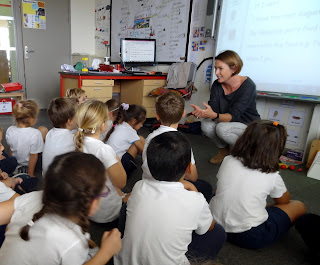 I'm lucky to have a bunch of colleagues who, despite all the time-pressures and full-on work of just being a teacher, make time to think about how to do it better, and how to share the growth with others.

So from time to time through the year Estelle and I tried things out, visited each other's classrooms, working out what it is that can be shared in a short time that will make the difference. Back in January we sketched a few ideas while we had lunch at BETT: 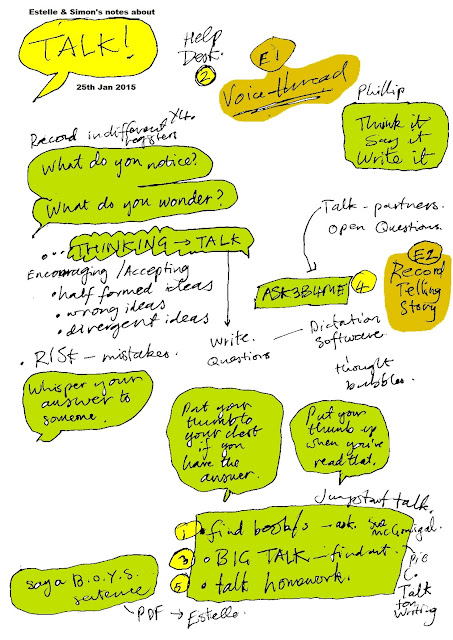 Some ideas we abandoned (dictation software!); others we focused on in the classroom, making talk routines, and reflecting on talk, a bigger part of our teaching. The journey has been as much, more, than the short session we ran yesterday, and I think, hope, we'll continue to develop it.  Certainly, staff are seeing the benefits of visiting and learning from each other!

Here's Rachel's summary of her Objective, Strategy, Tactics after the two days were up:

The slides from give some idea of what we did in the session; 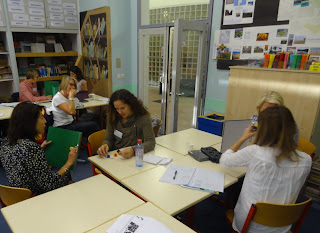 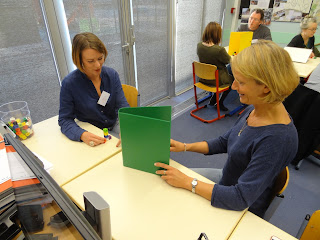 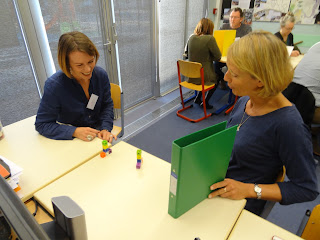 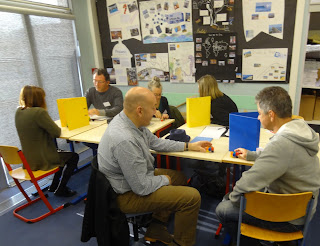 I'm interested in exploring with the class, in general terms, what it means to know something. There's Plato's three-part definition: that


I'm especially interested in that last one. I don't want to "teach" any of this of course, but I'm interested in providing stimuluses that will provoke the class to explore the whole area.

Here are three short lessons from the last three weeks.


① I told a story about a girl called Leena who sees the poster for Star Wars, and although she hasn't seen the film, she tells the basic story of the film to her friends, which they like. 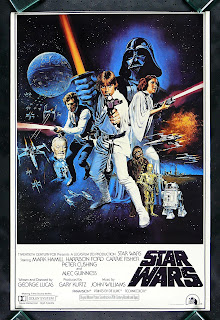 And I asked the question: 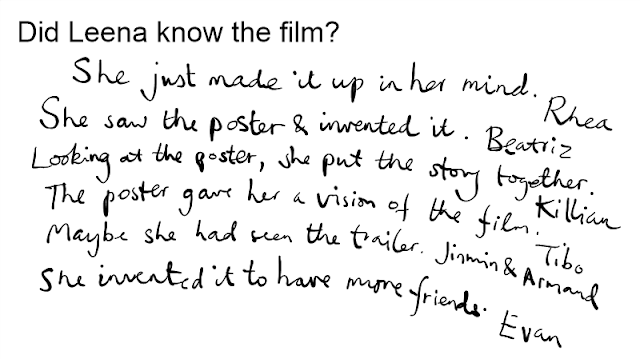 Quite a few children found the question quite a challenge, but I was determined to press on. Next week...
② I've mentioned the story The Sound the Hare Heard before. It's basically an ancient Henny Penny story, with the difference that Lion sorts out the problem by investigating the truth of it.

Here's some whiteboard notes of some of the responses to it: 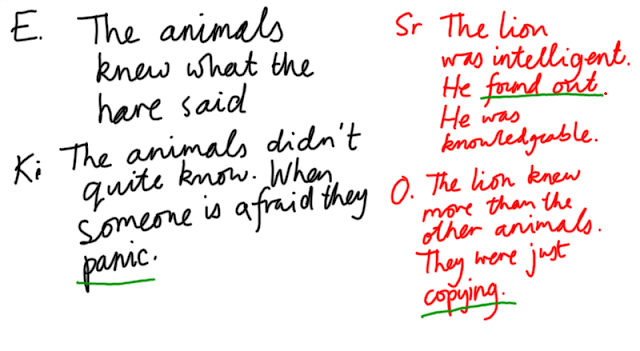 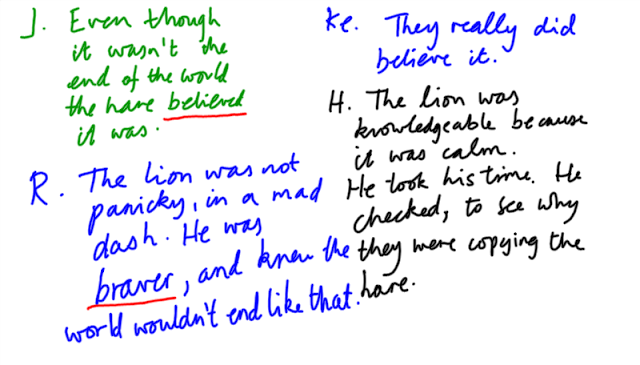 This time I felt like the ideas and conversation was flowing a bit more. Probably a better story!

③ This week we started by reviewing the previous two. Having seen Rosy's great philosophy sessions with Year 5, there was going to be more moving about, more quick-fire involvement. Children had to stand up and go to one side of the classroom (or stay in the middle if they were unsure) depending on what they felt about these.

Most went to the left. When it came to justifying their position there were a variety of examples: 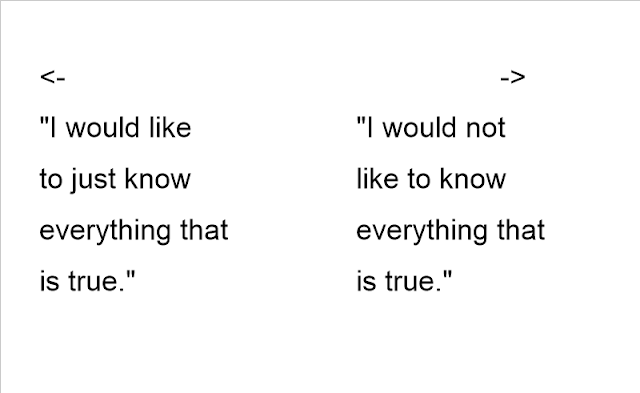 This provoked some really interesting ideas. Most went to the right, with lots in the middle too.
On the right, justifications:

M: It's fun discovering things, good to learn,
B: There is too much knowledge in the world for one person to know,
R: What about scary truths, that once you know them you can't hide from them any more?
R: What about secrets that you're not supposed to know,
T: Some things different people think different things, and one is not more right than the other.

I was really pleased to hear such interesting ideas. And pleased too because Rosy was sitting in on the lesson. I'll be visiting her's again later this week, perhaps to video this time.

I rounded this one off by telling the story of the Emperor's New Clothes, which most of them know, but is worth retelling. 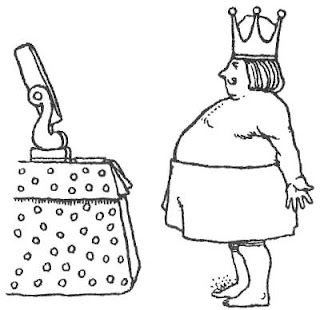 None of what we've done is what you'd call conclusive. But