In our number of the day sessions (which we haven't done recently but various students keep asking me that we do again) we evolved to writing the number of tens in the day number as one way of saying something about the number. 94=9x10+4. Most of the students seemed comfortable with this.

When we used letter names for Cuisenaire rods (which we stopped doing about half way through the year), it was natural to write 2r=p for 'two red rods are the same length as a pink rod'. Notice how that hardly seems like multiplication at all; more like counting.

I'm intrigued by how this seems to be easy for young children. Multiplication is meant to come later. What is going on?

The answer seems to be that, after the children have got to know the rods, they work as "units". I've just been reading Christopher Danielson's excellent Teacher's Guide to his wonderful How Many? and it's been helping me to think about this idea of a unit. 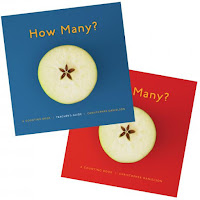 If we used cubes instead: 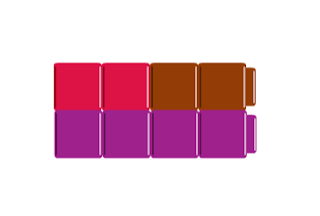 But, when through familiarity we've got used to say how the yellow rod can be seen as "five" (being five of the smallest white rod in length), it begins to behave as a unit. So, if we have four of them:

it's like having four apples. That the five is composed of five ones is in the background, not interfering with our count.

Which is my guess about why everyone in K3 (5 ad 6 year olds) was able to think about multiplication in this lesson (we call it 'times'; every now and then I throw in a "lots of"): 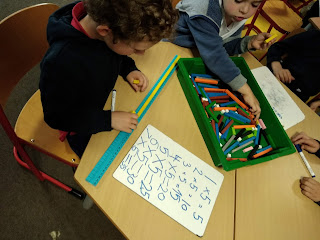 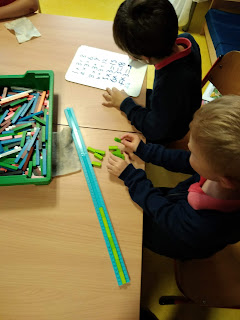 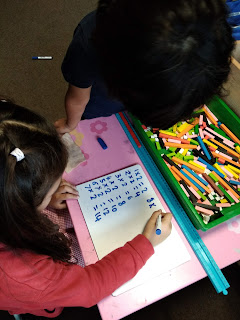 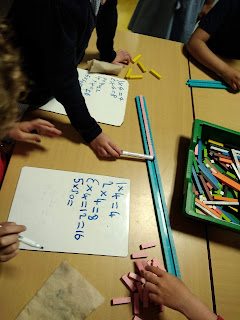 There's an album of these photos. (The tracks are available from Numicon. They were developed by Tony Wing, starting from the work of Catherine Stern.) 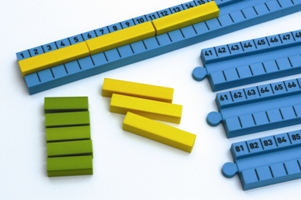 I'd be interested in your thoughts.
Posted by Simon Gregg at 00:29 7 comments: