I wonder if you could do this?

When you've read this sentence, could you close your eyes and, in your mind's eye, see some birds standing somewhere (and when you've done that, open your eyes and read on).

How many birds were there? Was it a definite number?
(I'm interested. If you reply in the comments, I'd really like to know.)

I got interested in this question after I read this by Borges:


"I close my eyes and see a flock of birds. The vision lasts a second, or perhaps less; I am not sure how many birds I saw. Was the number of birds definite or indefinite? The problem involves the existence of God. If God exists, the number is definite, because God knows how many birds I saw. If God does not exist, the number is indefinite, because no one can have counted. In this case I saw fewer than ten birds (let us say) and more than one, but did not see nine, eight, seven, six, five, four, three, or two birds. I saw a number between ten and one, which was not nine, eight, seven, six, five, etc. That integer–not-nine, not-eight, not-seven, not-six, not-five, etc.–is inconceivable. Ergo, God exists."

Now, I'm not really into the metaphysical dimension here I'm guessing that Borges' was playing. What interests me is the visualising and the idea of an indefinite number.

For one, we don't ask children to visualise very much, and this seems like another way to approach thinking, including number and shape.

Another thing is the idea of the indefinite nature of the interior image and its slightness and malleability, its sometimes fleetingness, vagueness.

One of the great pluses about number talks is that we're asking students not just what's 'out there' but what's in there too; How did they see those dots? How did they do that calculation? How are they sure? This kind of introspection is useful, and not just in mathematics.

I asked Sam and Pam to imagine birds on a wire. Then I asked how many there were. Pam said she saw seven, but wasn't sure if that was how many were in the first mental image she'd seen. Sam said it was a number between ten and thirty, but he didn't know the number.

I found these caveats intriguing. Down into the place where numbers aren't definite.

I asked Sarah and Lana. Sarah went on to write a great blog post about it. She says:


If, in my minds eye, I see more birds than I can subitize, can I ever truly count them in their original form? Can I capture them? Or will they always be a “clump” somewhere between 10 and 15? When I try to count them, do I change them? By assigning them a number, do I bring them into existence?

She asked her husband, who said:

There were birds and their existence was switching around. There wasn't a set amount; they were flicking between a few and a couple. I picked four when you said 'how many?' because I knew if I didn't answer you, you would say, 'I need you to tell me a number'.

I love the candour of this reply, admitting to the process by which a thing whose existence is switching around becomes a definite number.

@Simon_Gregg my birds move, they fly up and down, I'm like trying to catch them in the air and drag down to the way, they don't oblige
— Telanna (@TAnnalet) February 15, 2017

Lana asked her students, who gave quite definite answers: I've asked a few pairs of my students too. With each pair I asked them to visualise a square first, and then a circle inside the square. They do that straightforwardly, drawing them on whiteboards. Then:

The next pair didn't draw the circles inside the squares. They said they'd seen: 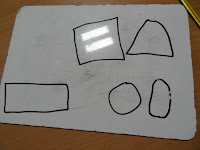 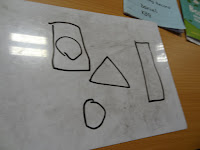 D, on my right went on to talk about a quintillion! 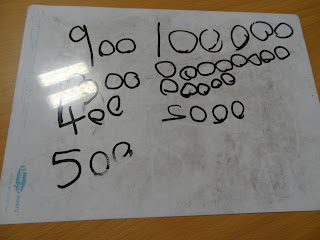 I wonder how much what they say reflects any original image? I know that as a boy I wasn't particularly concerned about  being truthful. I remember my teacher asking me about a picture on the wall that I'd painted, of a deer under a tree on a hill, 'Did you see it somewhere, or imagine it?' I thought, 'What does he want me to answer?' and said 'I saw it somewhere,' because I thought that was what was required. Actually I'd imagined it. It was only in my teens that I began to discover the pleasure of talking about things as they really are, the pleasure of sharing real thoughts and experiences with all their ambiguities and questions.

In addition, the confabulation of children is delightful and very fruitful. A four year old girl I don't know comes up to me in the playgound. 'Would you like a sweetie?' 'Okay,' I say. She hands me a stone which I pretend to gobble down gratefully, and walks away.

How many birds did you see?
Posted by Simon Gregg at 09:11 6 comments:

Email ThisBlogThis!Share to TwitterShare to FacebookShare to Pinterest
Labels: imagery 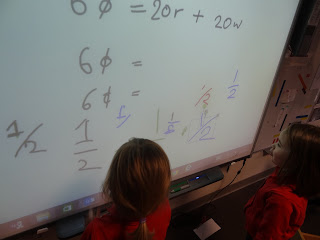 I'd love it if you would have a look at my skeleton plan and share any ideas that come to mind!