In Mr Barton's podcast of his conversation with John Mason and Anne Watson, Anne Watson says:


"Sadly, I think variation has become Variation, with a capital V, and some teachers think there's a right way to do it and a wrong way to do it. There isn't: it's actually embedded in mathematics."

Back in 2006, Anne Watson and John Mason wrote a short article, Variation and Mathematical Structure in the Mathematics Teaching Journal. 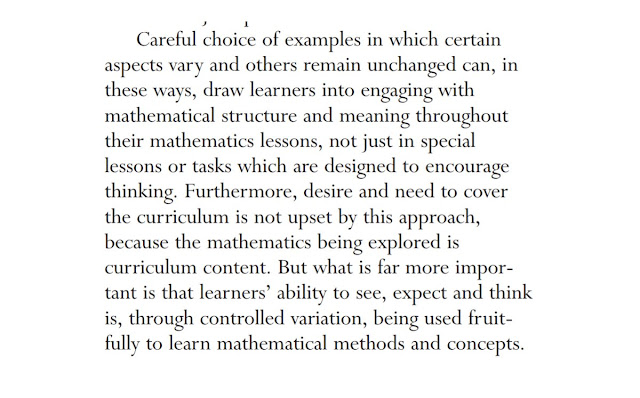 It seems to me, beginning to think about this, that considering variation is useful right from the start of education.

When we present the classic shapes poster to 3 year olds, we start doing things with variation. 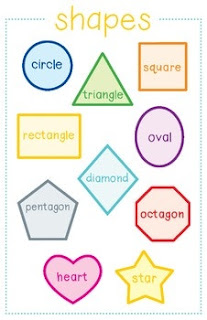 Children get the message, whether we intended it or not, that shapes with straight sides 'sit' with their sides, not their corners, at the bottom. Unless they're 'diamonds'! That rectangles and squares are different things. That triangles and pentagons and octagons are regular. It seems innocent enough, but teachers have some lessons later on undoing these impressions. This is why Christopher Danielson's Which One Doesn't Belong?s are so good. They consider the possible variation, including counter-examples, to help students think about the categories for themselves. 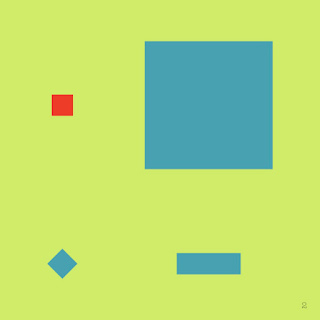 David Butler also has some great quadrilateral posters which reflect the real range of possibilities. 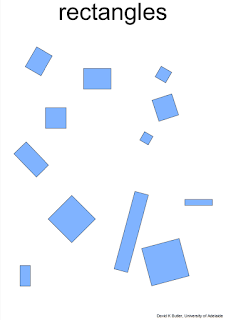 Similarly, when we always write 2+3=5, with the sum on the right, we're not doing justice to the possibilities with this notation. We should  sprinkle in some 5=3+2 versions too.

Often a series of examples leads to the possibility of certain generalisations. For instance, back in this post, I talked about how a set of differences can lead to  noticing about subtraction. 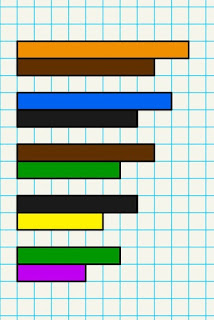 Indeed, it did lead to a conjecture: 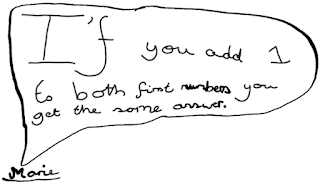 The other day I saw this tweet from Duane Habecker:

Why is 4 - (-1) equal to 5? No analogies or metaphors needed. Conceptual understanding might begin with a pattern and common sense. #CMCmath pic.twitter.com/SjY1APEBuT
— duane habecker (@dhabecker) March 10, 2018

Putting this series of subtractions next to each other invites noticing - oh look, you can carry on to negative numbers! - and - look! - when you subtract -1, it's just like adding 1. I wonder if it always works like that...?

You could see a 'number string' routine as a way of presenting examples to show the range of  possibilities and asking students to make links and comparisons between them. Take this number string in a 1st Grade (Year 2) lesson with Kristin Gray. 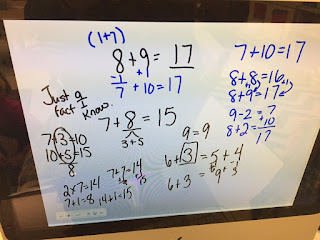 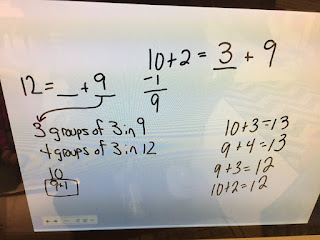 The number of examples is limited; the focus on responding to an unknown in different places in the equation. There's a lot of thought that goes into how the different examples relate to each other.

Another routine that I've seen and used just a little is What's the same? What's different? with two images; there are lots on Twitter with the #samediffmath hashtag. Here's one:


I've thought about variation lots when designing Which one doesn't belong?s, but not calling it variation. I've just had a piece on them, written with Jim Noble, in Mathematics Teaching. and I've got a folder of them. 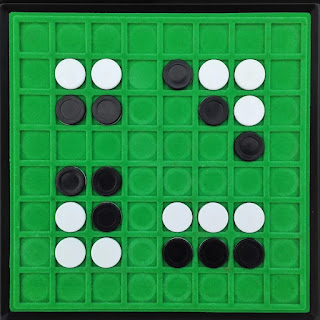 The design of them is fascinating: how to elicit the most responses, how to allow particular relationships to be noticed. Here, on this Othello board, my theme is half. That's what's the same about them. I could have introduced one where it wasn't a half. So we're mainly looking to arrangement for the differences. Are the two halves 'the same'? How many are there in total? Which colour is 'on top'? And so on.

I want to become more conscious of how we present examples, how we vary them, how we display new relationships in them. I'm now going to be looking out for how variation crops up in various places, trying to make my awareness of it as a theme more systematic.

After Le Maître est l'Enfant, Estelle and I watched another French education documentary tonight, Être plutôt qu’avoir ? -  'To Be rather than to have?' It was a look at education, especially in France, historically. I found the pictures of school before the 19th-century desks-in-rows era interesting. Like this from Pieter Bruegel The Elder. 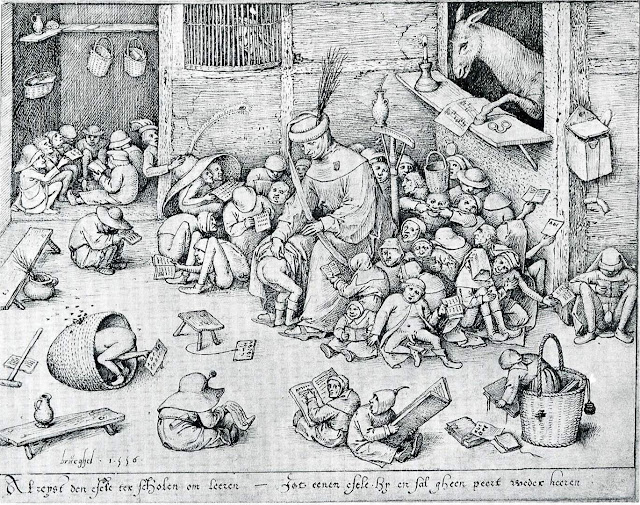 And then a look at some of the ways that some educators have enriched education for primary-age children: through circle times, philosophy for children, forest school, Montessori classes. Lots to think about again: good to now and again, or even regularly, challenge the way we teach - how much is a product of the relatively short history of public education, and how much is a conscious approach to real education?

We saw Célestin Freinet working the vegetable patch with his students. And some of his 'pedagogical constants', a kind of manifesto: