There are two studies I keep thinking about. Both involve large numbers of students. Both concern 'sleeper effects' - effects that don't appear straight away, but emerge later.

The first is a study in Boston Massachusetts, and I heard about it via Alison Gopnik. Public preschools had been made available to everyone, but there was such demand that places had to be decided by lottery. Effectively this produced a very large randomised trial, involving more than 4000 students.

The study, The Long-Term Effects of Universal Preschool in Boston, produced some very interesting results. Preschool attendance did not improve test scores in elementary school. It did however have a sleeper effect that emerged later in high school. More students who'd been to preschool finished high school, and more went on to college. 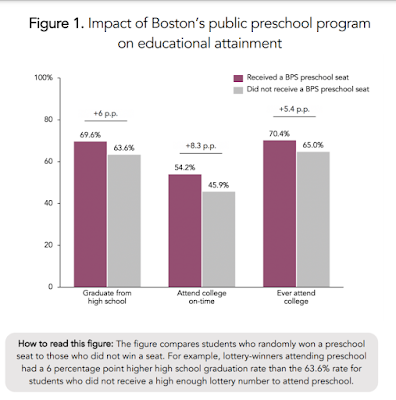 That's fascinating, isn't it? Four-year olds going to preschool didn't effect their test scores in the immediate years following, but it did have a significant positive effect much later.
What would be your guess about how this works?
😴
The second study was conducted with an even larger number of students, more than 12,000 this time. They are at the other end of their formal education, at a four-year college. Keith Devlin writes about it in this piece,
Students are randomly assigned to different teachers, and their test results are collected over a long period of time. There are two really interesting results, and I'll just touch on one of them here.
As Devlin puts it:

But here is the first surprising result. Students of professors who as a group perform well in the initial mathematics course perform significantly worse in the (mandatory) follow-on related math, science, and engineering courses. For math and science courses, academic rank, teaching experience, and terminal degree status of professors are negatively correlated with contemporaneous student achievement, but positively related to follow-on course achievement. That is, students of less experienced instructors who do not possess terminal degrees perform better in the contemporaneous course being taught, but perform worse in the follow-on related courses.

Or, in the words of the authors of the study:

Isn't that interesting! Students of more experienced and better qualified teachers get poorer test results that year - - - but better results in subsequent years!
What a fascinating sleeper effect! What would be your guess at an explanation for that?
😴
Posted by Simon Gregg at 00:52 No comments: