Where mathematics comes from

At the moment I'm reading a little about materiality in learning - how physical materials and the physical environment and what they can do are a kind of teacher as we interact with them.

It made me think about how that is true for learning mathematics. In my last post, I pondered what young children are learning as they construct a play house out of bricks together and move into it.

In an older post, I thought about the natural powers that students bring into play when they do mathematics.

This is from John Mason and Sue Johnston-Wildery:

The kinds of powers that are relevant for learning mathematics are ones that learners will have demonstrated by the time they arrive at school. Learners have innate ability to emphasise or stress some features and to ignore others, enabling them to discern similarity and difference in many subtle ways. They can also specialise by recognising particular instances of generalisations, and they can generalise from a few specific cases. In addition, they can imagine things and express what they imagine in words, actions or pictures, together with labels or symbols.

A couple of things about both agency and these natural powers. First, we learn them by exercising them in the world, interacting with people and things, primarily through play. Secondly, they don't serve us only in mathematics, but in all disciplines and areas of life.

That second point is important I think. The roots of mathematics are much much broader than the 'trunk' - stretching out into all areas of play and interaction. Squashing playdough, spinning round and round, having a conversation, singing a song, jumping in puddles, listening to a story. And not just because these things have elements of geometry, measure, arrangement and number in them, as they often do - but because all our growing powers are needed for the learning of any discipline.

I often return to this:

Maryam Mirzakhani, the first - and only! - woman to win the Fields Medal, only got into mathematics near the end of her schooling:

"What are some of your earliest memories of mathematics?"

"As a kid, I dreamt of becoming a writer. My most exciting pastime was reading novels; in fact, I would read anything I could find. I never thought I would pursue mathematics until my last year in high school."

Could Maryam Mirzakhani's love of reading have supplied important ingredients that later went into her mathematical work? I think so.

The foundations of our mathematical learning are in all our learning.

Maybe - and I'm blundering into unfamiliar territory here - this connects with that old chestnut: 'Is mathematics discovered or invented?'

The question often seems to be answered without thinking of individual development. As if mathematics were a free-standing thing that wasn't created and recreated each time an individual explores and learns about it.

I want to say that it is very much discovered - in our first steps and first reaching we encounter magnitude. It's in the world that we learn the agency, the natural powers and all the other building blocks of mathematical thinking. It's in how we arrange the bricks in that play house, how we create an inside and outside, how we space the toy cars on top. And in the logic of how one step leads to another. The material of the world is full of the different logics of mathematics. And when we abstract it away from its inception in the physical world, again and again we return to the world at further points - we have already felt the inflection points of a curve when cycling in figures of eight on the tricycle in the playground. We know what a plane is from the many floors we have moved across well before we meet the Cartesian plane. In algebra, we often get a whiff of the idea of magnitude that lies behind the cat's cradle of manipulations we do with symbols.

And of course mathematics is invented too. The directions we take are ours. They reflect our economies and social structures. Counting for buying and selling and taxes. Measuring for sowing seeds - and taxes. Another planet would have a very different body of mathematics.

As usual, my ideas around this are half-formed, rough-draft, and probably too briefly expressed.

Practically, working with 3-4 year olds, I'm confident that all the story reading and writing, all the conversation, all the art work, messy play, construction, games, roleplay, sensory play, small world play - and of course play with mathematically structured materials and moments - is the best thing, not just for learning in general, but for the learning of mathematics too. 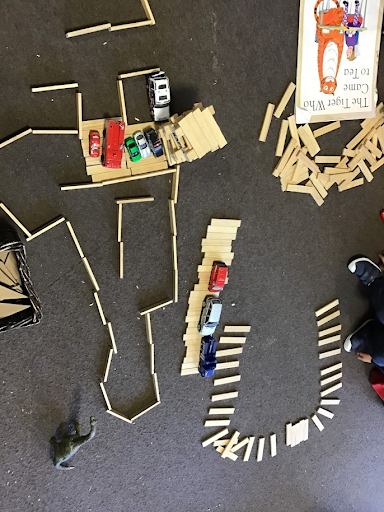 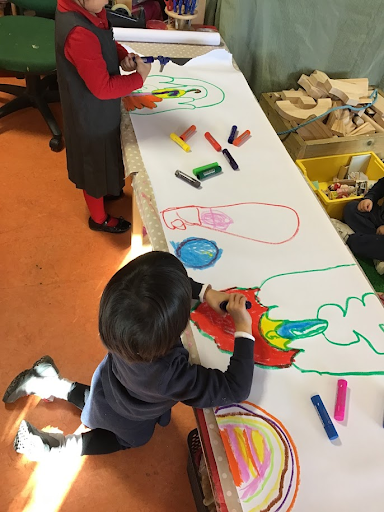 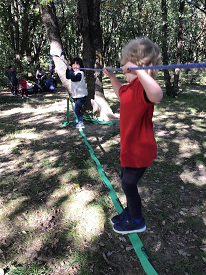