We'd been dividing, looking at remainders with Cuisenaire rods. (See previous post.) There are 17 students in the class, so we looked first at that. 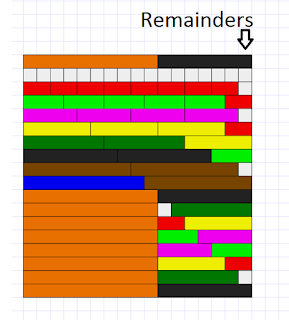 The next day we went onto numbers that the children chose:

I felt that maybe one or two were being "pulled" along with this, not really quite getting it; lots of people were asking me what numbers the different colours were. Did I need to go back and give them a little bit of the play and familiarisation stage?

So I decided that the next day, after doing some quick image work, 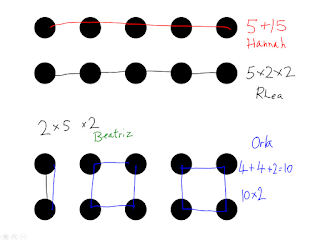 I'd give them 20 minutes free play with the rods. I knew that lots of what they did wouldn't be mathematical, but thought maybe just handling and getting used to the rods would help everyone to own them more.

There was lots happening. (click to see gallery of images)

To start with there were lots of patterns and pictures.

Then something interesting happened. One of the students decided to make a game. Soon, games were sweeping across the classroom.

I took some videos:

A lot of these games are a little hard for me to follow. They're not really very mathematical. But they have given me lots of ideas for ones that could be!

I don't know whether I did the right thing or not, but I was so interested by everything that was going on that I let the play carry on for 40 minutes to the end of the lesson.

At the end of the week everyone in the school has "golden time" when they can choose what to do for half an hour. So, I was really pleased when one student said, "Can we play with the Cuisenaire rods during golden time?"
Posted by Simon Gregg at 05:34 No comments:

Impressed by Caroline Ainsworth's researches into using Cuisenaire rods, I got hold of Madeleine Goutard's 1963 booklet, Talks for Primary School Teachers. Gattegno writes of Goutard in the foreword thus:

Not the least of her talents is the ability to express simply, accurately and concisely ideas that in my words remain obscure to many. 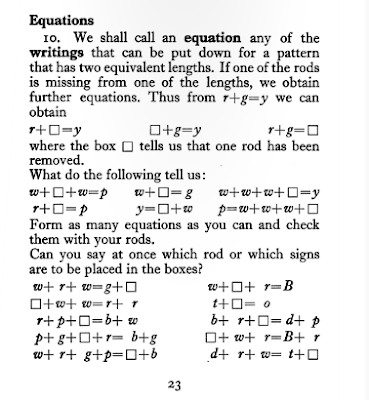 which - despite the treasures in them - somehow put me off with their layout and wording.

And there are really all sorts of good things. Like this, taking thirteen and seeing which rods "fit" in it: 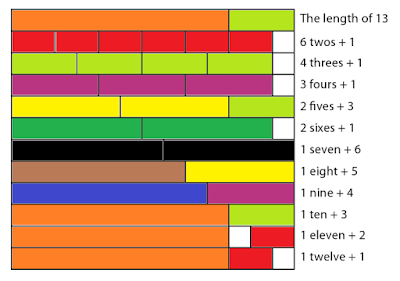 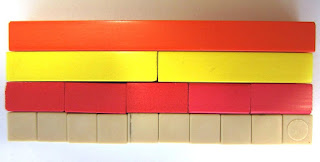 but this made me see, there was a step in understanding I was missing out, looking at which numbers line up in the 'wall" of a number and which ones don't.  This realisation came just in time, as we've just begun to look at factors and primes.

There are seventeen children in the class, so we started off talking about getting into groups, and children being left over. Then I began to show how we could look at this with the rods.
And off we went with the rods themselves: 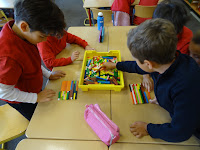 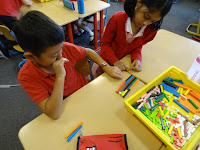 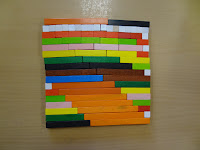 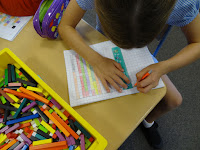 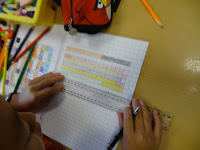 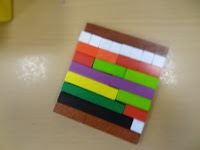 I'm interested in how much we've absorbed of this, and how to explore further, how to write about it, how to digest it. (Q: Is it worthwhile getting the kids to take such trouble over the drawing? I'm inclined not use colour in future.)

Anyway, some snippets from Madeleine Goutard that show, much better than Gattegno does, how exploratory all this might be:


We must avoid an over-emphasis on teaching: that is, we must avoid showing the child things he can find out for himself in his own way. (p3) 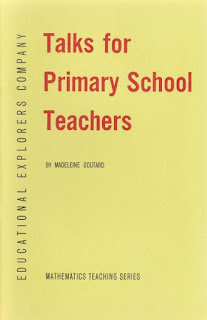 ... he must be given the greatest possible initiative in building the mathematical edifice. Instead of always beginning the lesson with: "Get out your rods; do this, do that"... the start may be in the form of a question:- "Who remembers what we were looking at yesterday? And what did we find...?" (even if it is thought to be insufficiently grasped, and that there will be incorrect answers). "Let's get our rods and make sure that what we are saying is true." Leave the initiative for conversion to the children themselves. "But did we have to use that particular rod? Which other one could we have used...?" Make them work out what would happen if: "We never  worked out if that number had factors? Does it? Why? Which ones? Let's see if we guessed right." In this way the mind flies ahead of the facts, instead of lagging in their wake and being led to a docile submission to what is obvious. (p5)

What I want is to see children who express themselves and use their knowledge, such as it may be, creatively.  (p44)

It is not the passive possession of knowledge which is important, but rather the ability to acquire it: that is, to make use of what one has already to lead to further knowledge in abundance. (p48)

A couple of years back I uploaded a brief video about Cuisenaire rods for Mathagogy.
I've done a lot more with the rods since then, and would make a different video. But I still think, suspect most of the learning is ahead. One of the things that makes me feel like that is this 1961 video of Caleb Gattegno:
What do you think when you see this?

Me, I'm very attracted to the possibility that young children can learn so well using the rods. But I must admit to some discomfort.
I know it was a demonstration, not a lesson but...
Those children! They obviously get the mathematics, but... they seem so, well so quiet, these five year olds! And so clever. Were they selected from among many to be in the film? (The children in the French version of this film seem a little more like the five year olds that I know.)
And Mr Gattegno, he seems like the giant that the tiny students follow, and maybe we teachers follow. The demonstration is very directed. Was that how he taught? I would love to see a proper lesson.

Really, what do you think?

My feeling is that Gattegno's real lessons would have had more input from the children themselves, would have allowed them to explore and to talk. I like this diagram that Gattegno drew to explain how he sees the teaching situation he wants, on the right:

I'm not sure from his books how the lessons went exactly - I know he started off with free exploration and play - and the impression I get is that children were playing games with each other, trying things out, explaining things. This seems to be part of his philosophy. And I think to get to the understanding we see in the film, they must have been doing and discovering things for themselves. 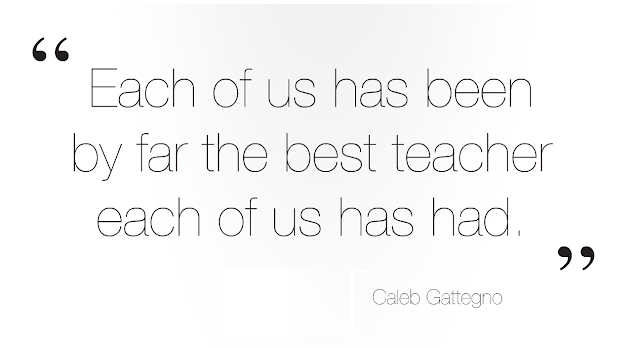 We started off the term establishing a few ground rules, like, "It's OK to make mistaekes mistakes."

Felix made us laugh. We got talking about how there was a lot of falling off involved when we learnt to ride a bike.


"The first time I rode a bike I didn’t fall off,"
There was a pause, a doubtful but slightly impressed pause, before he added, with perfect timing, "But I did crash into a hedge," and, "At least it wasn’t a brick wall."

Then we began our maths work with a look at our number line.
We've put one in both Y4 classes (I think Y5 are going to use it too). It's based on math4love's wonderful Prime Climb game - which we're going to play next week.

We looked at the number line, and then at the hundred square poster: 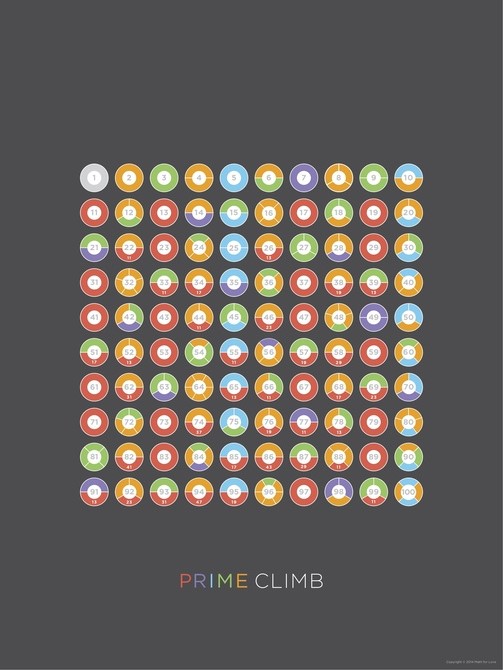 We looked individually first of all. "What do you notice?" was the question. Then pairs. Then shared a few observations as a class. It was interesting that at first the class weren't seeing the multiples in there. They were looking at how many divisions of the circle there were, and then later beginning to look at how the colours were patterned. Then we wrote down a few of our observations. I accepted anything correct or half correct, even, "there are a lot of colours" and passed the adventurous and sometimes knowledgeable but over-hasty with a light touch of doubt. We left it after fifteen minutes and then returned to it the next day, today. We shared some of what we'd written, and then things started to come together, people were noticing the patterns more and more. Jinmin noticed that 51 had a little 17 in it and it was in the 17 times table! Here's Maryam's observations in her journal: 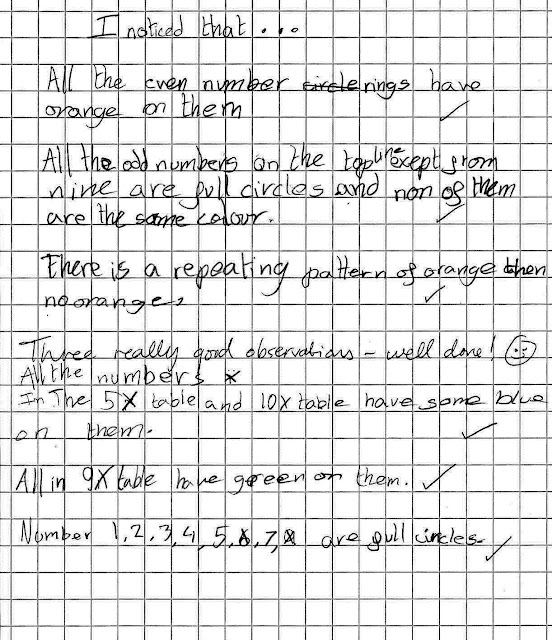 It's exciting to see how thoughts develop. I haven't really been giving hints. Just asking the class to move between individual looking, pair looking, sharing out loud with the whole class, writing, and then coming back the next day for a little more of the same. Some of the children are going to be familiar with this in a different form; it's great seeing them gradually recognise it again by the sheer power of noticing!