Plato famously defined knowledge as 'justified true belief'. There have been critiques of this, but it seems like a good first approximation. The 'justified' part is important. If I roll two dice and say, 'It's going to be a seven!' and then a seven is rolled, because I have no reason for believing that a seven will be rolled, I did not know that it was going to be a seven.

Something similar happens with misconceptions. If someone has a misconception they have a reason to know correctly.

For instance, we might say there's a "public misconceptions about antibiotic use" - people perhaps think that antibiotics will help with a virus. But they have good reason to know this is not true - it is widely held by pretty well all reliable sources, and plenty of easily-available sources at that. They are adults and have had lots of opportunity for learning this.

Some things will just be 'Terra Incognita' - as yet unknown land. The way European explorers marked parts of Australia or America while only parts of their coast had been explored. Like Australia here: 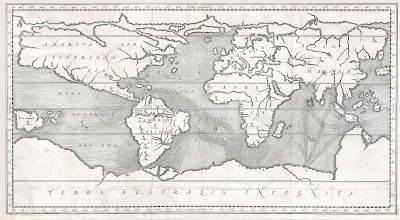 It seems incorrect to call these misconceptions, as if those cartographers somehow had access to our modern knowledge but hadn't properly absorbed it. It's more just... not knowing yet. The map-maker gives the Terra Incognita a fairly random coast - perhaps they should have made it blurred or just drawn the parts of the coast they knew. But that's another skill again - to be able to judge and show the extent and character of your knowledge and certainty about something.

It's not just a question of semantics. 'Misconceptions' often seems to have a note of frustration in it: 'They had all the information they needed, but then they've gone and adopted this weird idea that will probably be difficult to correct.' Perhaps there's also a hint of satisfaction in there, that I am the one with the correct conception of things.

If however it's a question of territory that's still unfamiliar, where learners need more exploration of a familiar domain or an introduction to a new domain - then the onus is on us teachers to make that new exploration as achievable and instructive as possible.
Posted by Simon Gregg at 14:25 1 comment:

One thing I like is the discussion of natural powers. On page 74 they write:


The kinds of powers that are relevant for learning mathematics are ones that learners will have demonstrated by the time they arrive at school. Learners have innate ability to emphasise or stress some features and to ignore others, enabling them to discern similarity and difference in many subtle ways. They can also specialise by recognising particular instances of generalisations, and they can generalise from a few specific cases. In addition, they can imagine things and express what they imagine in words, actions or pictures, together with labels or symbols.

That's quite general itself, so I wanted briefly here to 'specialise', to think of a specific case, and how these powers might be evident in it. Taking one of my favourite routines, Which one doesn't belong?, how do these natural powers appear?

Let's look at this record of discussion with a Grade 2 (=UK Year 3) class:

Stressing and Ignoring
The image itself contains myriad possibilities for comparison, for finding the odd one out. As children contribute, they're stressing just one feature of the shapes, and ignoring the others for the moment. For instance, take that observation in the bottom right. In Triangle D, the coloured shapes are next to each other symmetrically. All other features have been momentarily blanked out or screened off. The student considers only the symmetry of the coloured shapes. They then have the challenge of flipping out of their focus, and hearing each other, focusing in with them on each new feature in turn.

Specialising and Generalising
Finding an odd one out involves finding a group whose elements share the same general property. When Patrik identifies the bottom left (C) as being different, he's seeing a general feature of the others that the coloured areas 'touch'. For his definition, he's including touching corner-to-corner as touching. Are students specialising from the generalities they identify? Perhaps as they check that the general property they notice is in fact exemplified by three of the triangles and not by another. It might also be interesting as follow-up to ask them to make other triangles which fulfill the general condition, or which don't.

Distinguishing and Connecting
Like the same-different routine, where the teacher asks of an image 'What's the same? What's different?', here I think the seed of an idea might well begin with noticing two images being the same in some way, or different in some way, and then checking the others. So, perhaps Manu looked at A and C and saw that, for both of them, their coloured shapes were not equal area. He compared with the others. D jumps out as having equal-area triangles. Antonio was talking about B, saying that he thought, but wasn't sure, that the two pink areas have equal areas. Manu thought not, which gave him three triangles without coloured shapses being equal. Only in D were they clearly equal.

Imagining and Expressing
Santi commented that D could be folded up to make a solid shape. I often find children imagine transformations with these shape-based images. They might imagine moving part of the shape round, or chopping part off, or filling in a concavity. They might imagine, as in this case, folding the shape. This makes me think, as transformations come up more than we seem to teach them, maybe we should be teaching them more. Anyway, in this case, Santi went off and found four Polydron triangles, connected them up like D and then folded them - and behold  - a tetrahedron! I'd taught most of these children two years before, so one student, B, and I recalled when she had made the same shape two years ago and been impressed that it could unfold into a different net than the one she started with.

About expressing, all of these students, almost all of them not first-language English speakers, found ways of explaining their idea. Sometimes the idea might be subtle or even opaque at first, but I've found that it's worth trying to listen and hear what they're saying, even if it seems at first not to be correct. (For more on that, see this post.) Hearing themselves and each other articulate their ideas is both a reminder or introduction to many mathematical perspectives and a celebration of bringing natural powers to bear!

Conjecturing and Convincing
Often children's contributions have an element of conjecture about them. They might not have double-checked; on closer inspection, one of the four images might have the property they thought it didn't have. So there's sometimes a little risk in making contributions. They are making claims. It's good to get used to doing this in this bite-sized way. They may need to justify the claim, again in a small way. 'You say B is not diagonal or straight. What do you mean by that?' Sometimes, there's a claim that could be debated and investigated further. One such is the claims made about triangle B by Antonio and Manu. Antonio claimed at first that the two pink triangles were equal-sized. He then changed his mind. Manu claimed they were different sizes. I chose not to spend time on this then, but with other classes we've investigated a similar claim further (blogged here).

Organising and Characterising
In a sense, when we play this game, we are mentally putting three shapes together and separating another. Sometimes students bend the rules a bit, and want to tell me when two fit in one group and two in another. For instance where Gustaw says that A and D do not have stripes. The students are sorting, finding a taxonomy for the four images in front of them.

Looking at these natural powers helps to anatomise some of the ways in which students are thinking when they perform this task, and in fact many tasks. It also helps to explain why I like WODB so much. On this occasion, every member of the class contributed. When I stopped, I had to promise the ones who still wanted to speak again that, even though the board was full, I would hear them while we got on with our next task, which was to construct quarters at our tables using a frame and tiles.