Rather than triangles, which was on the Grade 3 (English Year 4) plan, I felt that hexagons would give us more scope for focusing on properties. It's worth looking at Christopher Danielson's lessons on this. I wasn't really expecting to get on to proof, but if a conjecture came up, I would be happy (it didn't this time!). We started with a Which One Doesn't Belong? 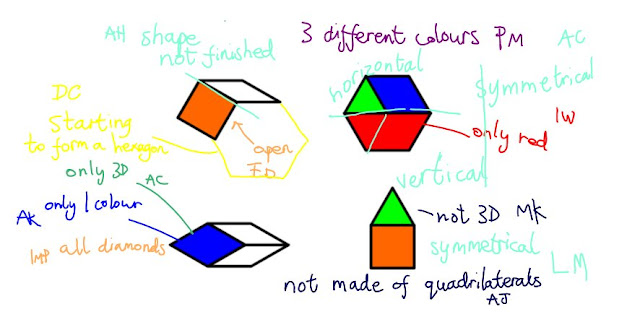 I mentioned that three of them were hexagons; they didn't have to be regular to be hexagons.

We asked the classes to make hexagons from pattern blocks, to make one whose shape was not chosen by anyone else. This had advantages. The hexagon, kind of, 'belonged' to the student. We got a range of different hexagons that we could construct and measure easily, and would also, mostly, tile. But I'm still wondering about the gains and losses from this approach, and I'll come back to that. 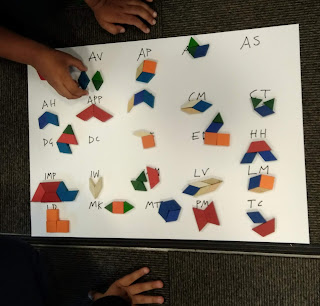 Finally, after a number of repeats and non-hexagons that we didn't spot straight away, we had a set: 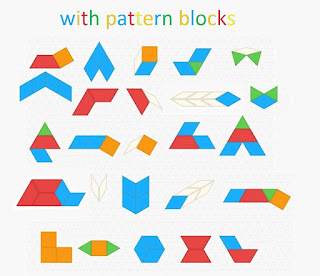 which I reproduced for the class without the colour, so that we'd be focusing on the component shapes less: 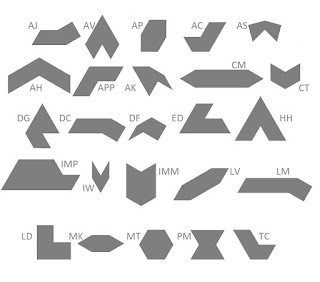 - still time for another pattern block hexagon WODB though: 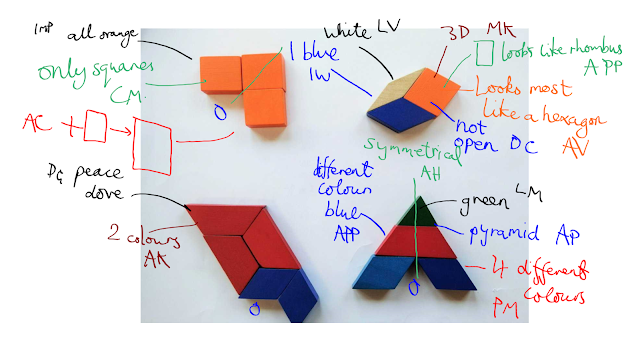 Notice that 'looks most like a hexagon'! We were going to shake off that regular hexagon thing...

We looked at side length, counting the length of almost every side of the pattern blocks as one. I also talked about perimeter. (BTW: my opinion is that it's really good to introduce this separately to area. Although it goes together with area in our minds like salt-and-pepper, my feeling is that some students get a little which-is-which?) We documented this for our hexagon, later adding on parallel lines and symmetry: 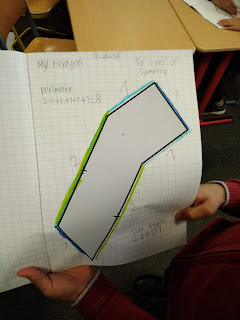 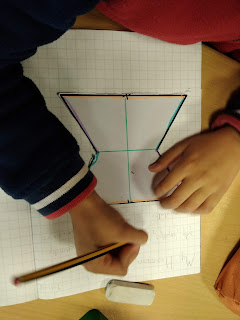 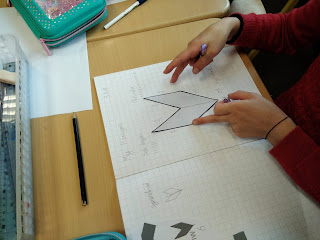 Then, starting from the known fact that a square's corner is 90°, I asked the class to find the angles on the other pattern blocks, which, together, step-by-step, they did. The big breakthough was when a pair realised that three of the acute angles of the thin rhombus fit into the squares corner. Then that was a measure for all the others. 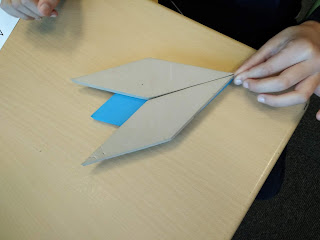 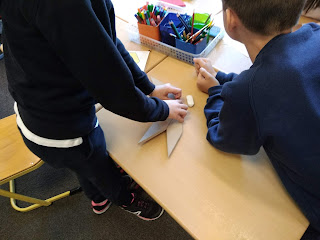 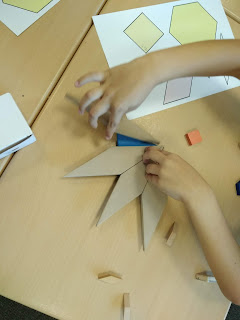 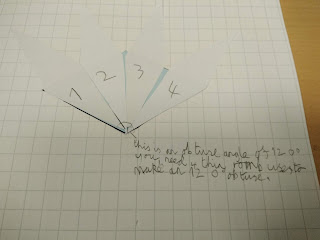 So, the next day, we applied this to our hexagons. I'm pleased about this part of the sequence, because it seemed to make it possible for everyone. 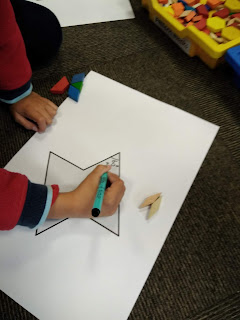 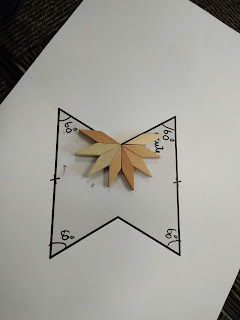 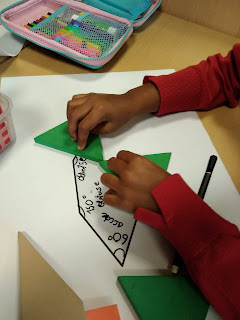 Time for another WODB then next day, with four of our hexagons with angles shown. 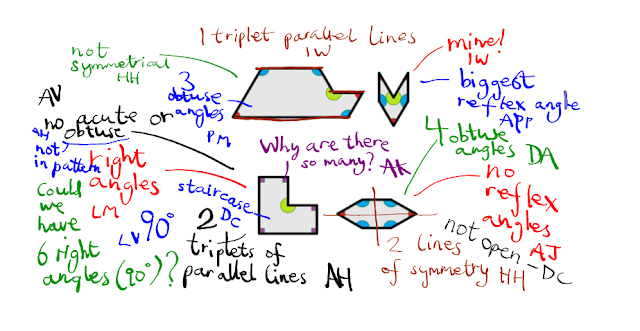 I hesitate to add this bit, because I'm unusually lucky to have a colleague in secondary who laser cuts me shapes out of acrylic, and that's not accessible to many. But the kids were really excited when these arrived... 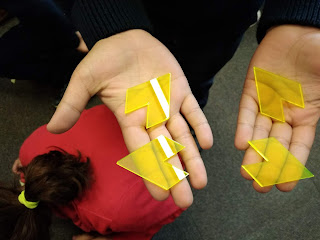 Immediately they began tessellating them: 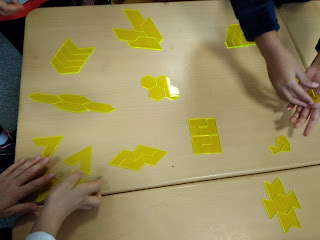 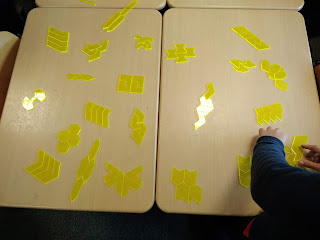 We recorded this later: 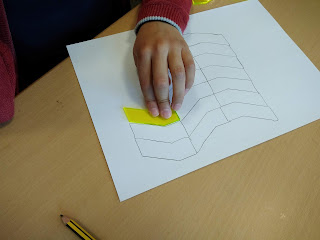 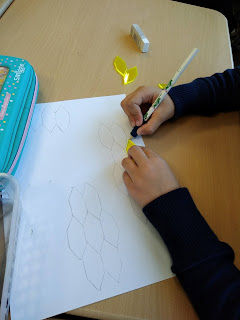 This one AK couldn't get to tile:There's a couple we had difficulty tiling: 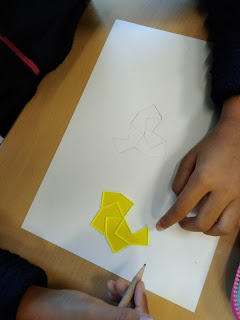 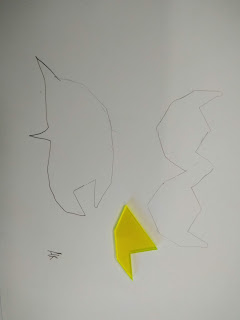 Martin helped out with one:

I suspect the one on the right works if you ensure that you keep using the same two combinations of angles at each vertex: pic.twitter.com/CcNGZrAZrf
— Martin Holtham (@GHSMaths) November 16, 2018

And Hana helped out with the other with a tiling that includes some other pattern block shapes:

Spent my evening playing with the first hexagon. I wasn’t able to tile the shape by itself only, but came up with these three tessellations—one by adding squares and the other two by adding triangles and squares. pic.twitter.com/WL2vdrIhhn
— Hana Murray (@MurrayH83) November 17, 2018

Rod did the same:

Those are nifty. Inspired by that, I came up with this tiling with triangles and hexagons. pic.twitter.com/xwZElxvYGl
— Rod Bogart (@RodBogart) November 17, 2018


All this led on nicely to our other tiling work with the pattern blocks.

To review what we'd done, I made little books about the 25 hexagons (taking too long on all the images, which was useful in class but I don't recommend to others!) and asked children to write about different aspects of them. 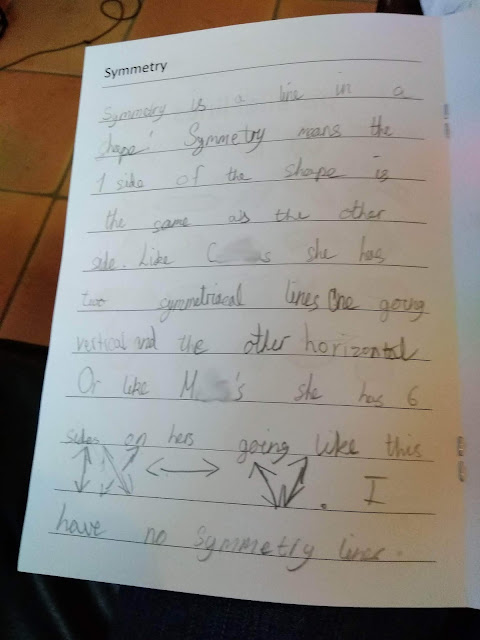 The books showed that the students had a lot to say about the various properties we'd looked at.

We also finished off with a WODB that students annotated individually. This told a mixed story. I'd chosen some hexagons that weren't within the pattern block family.  The students did notice lots, and showed their knowledge through their annotations: 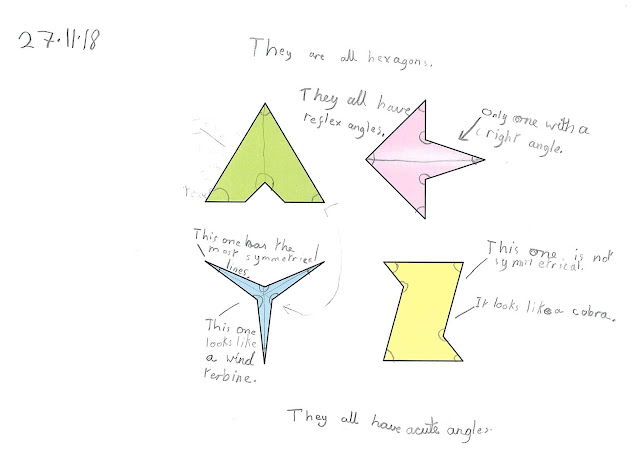 But some of them also treated these hexagons as if they had the same uniformity that the pattern block hexagons had. Some saw, for instance, the diagonal lines of the green shape as parallel. Some tried to see the hexagons as composed of pattern block shapes. And some tried to measure the perimeters - oh dear, I hadn't thought of that, and hadn't built in whole-number lengths! I kind of feel this was unfair of me, but it has made me more aware of something.

It seems we have some things to unlearn now. Another thing: for our brief estimation actiivity the following week I used Estimation 180's What degrees of the pie have been eaten? So many students put 90° or 60° - and suddenly I realised, now they think all angles are going to be in mutliples of 30°!

So we may need to unlearn:
Luckily, it's not hard to find counter-examples that undo most of these overgeneralisatons that I've led them into. The undoing could even be an impactful way of learning these important points. So, I'm not too disheartened.

But I'm still mulling this over. Would it have been better to have given a selection of more varied, non-pattern-block hexagons, like Christopher Danielson's?
They would have lost the personal creation, the ease of measuring, the tiling perhaps. But they would have had a bigger, more representative example space.

Or I could have chosen a different playground for hexagons. A geoboard maybe, or as in Lana Pavlova's lovely hexagon work, the tangram. Or moved more quickly through differrent embodiments of hexagon.

All this connects with some of my recent thinking about examples and generalisation. Have a look at this, from Thinkers by Chris Bills, Liz Bills, John Mason and Anne Watson:

I'm now much more aware of how our choice of example, the variation we include, carries its own potential misinformation. Students at the start of this felt that a hexagon was a regular hexagon - that's what they'd been shown. We show a range of rectangles and don't include a square. We call the blue and light brown pattern blocks rhombuses, but (natually) call the square a square, even though it's a rhombus too. We look at fractions as circles. Students are going to see features of the examples we present as essential to the properties we want them to become familiar with. Some of those features will be, but others won't.

So the 'problem' with my hexagon lesson is perhaps a more general one...

How would you do a set of lessons on hexagons? What do you think about this problem with examples? As usual, I'd value any comments.
Posted by Simon Gregg at 05:08 5 comments: