Rachel, Estelle and I have been on a great course with Anne van Dam on Saturday mornings in January.

One of the things she asked us to consider was the theory building that we see in children’s play and conversation, and to use this intentionally as the basis for planning.
I wondered about some of the times play doesn’t seem to be theory building - for instance when some of the students like to get the dinosaurs and bash them together in dinosaur fights. Maybe I needed to look closer, Anne suggested. So I did. I recorded a little of U and V playing with them. 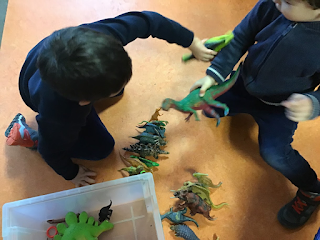 After bashing for a while they say:

U: Le he apretado el cuello.
V: Todos los dinosaurios son fuertes pero este es el mas fuerte, a que si?
U : Vamos a ver los cuellos. Son los mismos?
V: No, el con la boss, el mio es mas grande.
I don't speak Spanish (yet - I'm puting in some Duolingo time on it!) so I asked our colleague Irene to translate from the video, and she kindly sent back:
U: I held his neck.
V: All dinosaurs are strong but this one is the strongest, am I right?
U: Lets see how tall the necks are. Are they the same?
V: No, the one with the hump, mine, is the strongest. 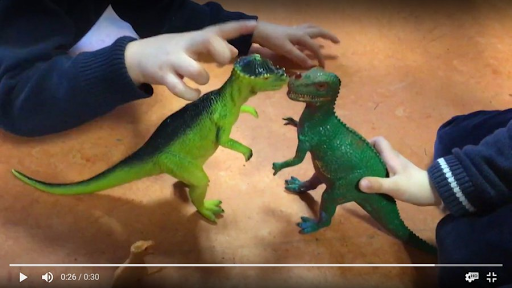 So... thinking about strength, where the strength is, comparison, anatomy… lots going on!

More specifically, they seem to be considering the features of the dinosaur that might contribute to strength, and beginning to measure those features. They are interrogating each other and seeking evidence: ‘Let’s see...Are they the same?”

Anne encouraged us to think about next steps, and as it seemed both to be fascinating to some of the students, and to be a place where they were thinking critically and theory building, I thought it was maybe worth building on. What could the next steps be, I wondered?
I showed this image, and asked what is strong here: 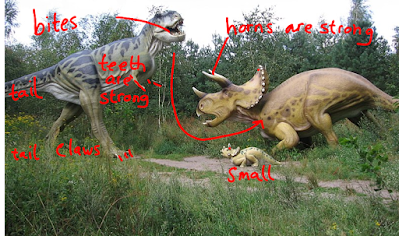 I was very pleased that T wanted to contribute lots. Though he’s 3 and beginning with English, he knows a lot of dinosaur names and has a lot of interest in them.
Alongside this, a question about the relative strength of two pyramids came up. Which is the stronger?

We tried it out with our dot stones, which have graded weights, to see how much each pyramid could support. 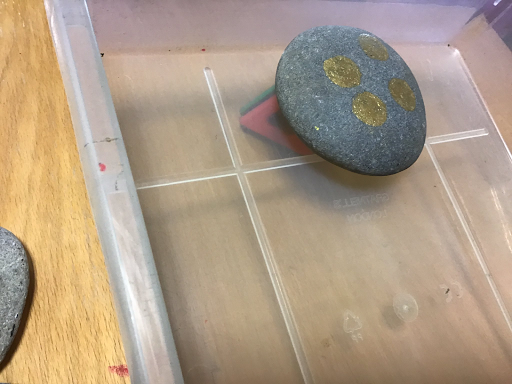 It turns out the square-based pyramid is stronger: 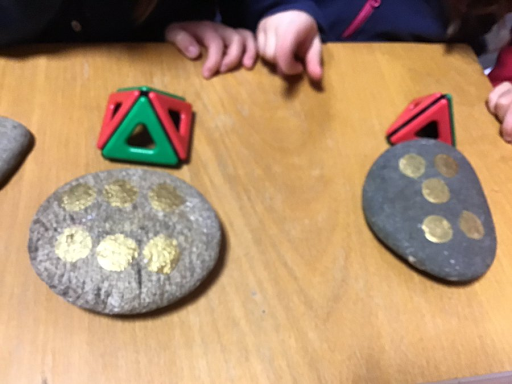 Back to dinosaurs...
At some point I tried playing one of the many simulations of triceratops facing up to a tyrannosaurus. Children started asking to watch more of these, and I found some that could work. I was stopping the video at various points and getting lots of observations and conversation.
I also wrote this up and shared it with Estelle and Rachel and the team in our regular Monday meetings where we look back at specific moments of play and learning. Afterwards, I wrote:
I’m finding putting this down and sharing it with colleagues is helping me think of next steps. It’s bringing it into focus for me - I don’t really see the way ahead, but I feel like there are enough clues in what’s happened already, and in our shared knowledge, to come up with some ways forward. It helps to have detailed evidence to work on, and might give us pointers to more general matters about pedagogy too.
Then I saw on Twitter a story about palaeontologist Dr Elsa Panciroli who had stumbled over a fossil Stegosaurus bone on the Scottish island of Eigg. If we could talk to her, it might help us to see that people - scientists - do the work of finding out about these creatures. It might also show the students that they could ask questions and get answers. And of course, tell us more about dinosaurs. I tweeted to her - and she agreed to Zoom with us! 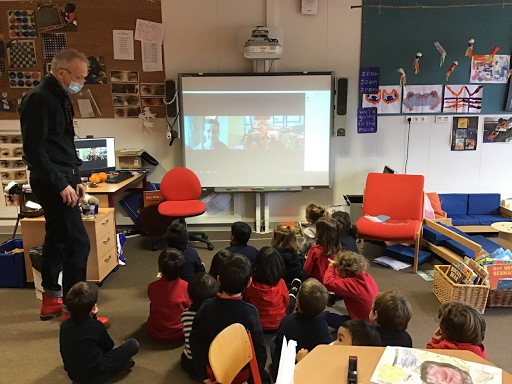 She became our 'Dr of Dinosaurs' and answered the questions brilliantly. It was great to see children that were just beginning to feel confident at school put whole sentences together in English asking their questions and getting answers.
If I was in any doubt about the impact this had, one of the parents shared how her son had been so animated about our meeting that she'd written down what he'd said: 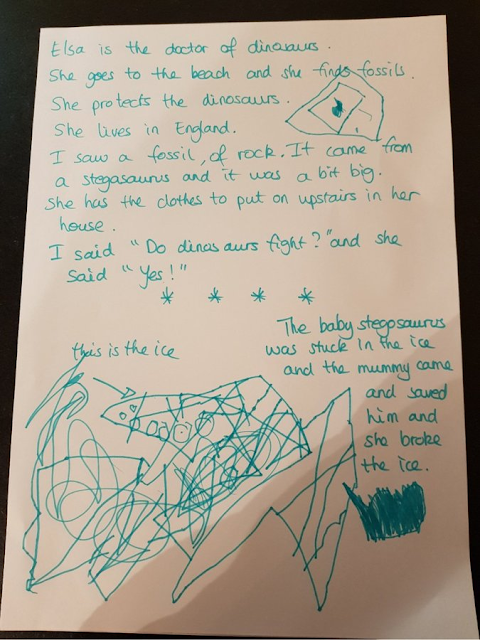 And when I asked about favourite dinosaurs, Stegosauruses were now the most popular. 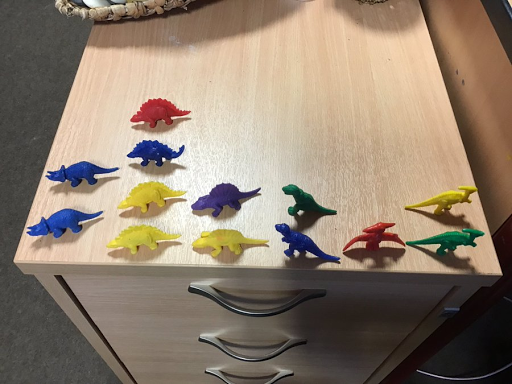 I don't know where this will go next. But it feels good to be following up on not just one  on the things that interests some of the students, but on their thinking about that interest, and to be making connections outwards from there.
Posted by Simon Gregg at 01:45 No comments:

Estelle has tried helicopter stories before - hearing children's stories, writing them down for them exactly as they tell them, and then giving the class the chance to act out the stories on a classroom 'stage'. (We've discovered Vivian Gussin Paley, who made great use of this approach. We've read her brilliant Mollie is Three, and are moving onto The Girl with the Brown Crayon.)
Z (4 yo) sat down to begin a book. Like this. She tells me what to write in my story book, and wants it on the page too. 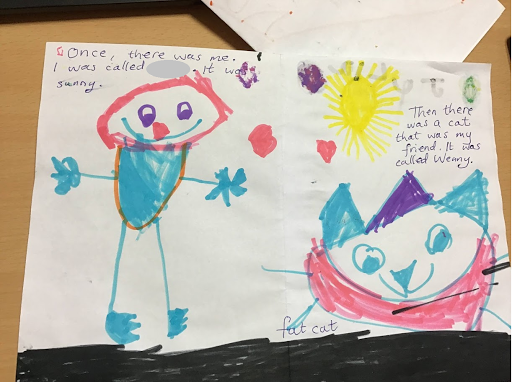 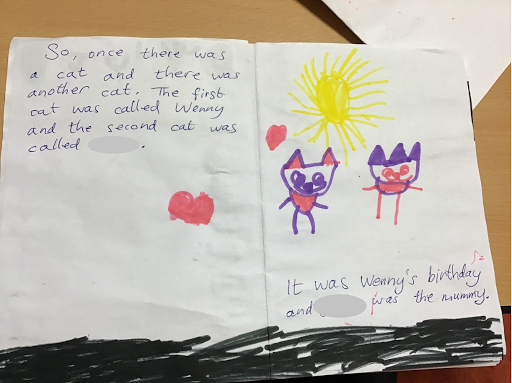 Two other children had joined her: 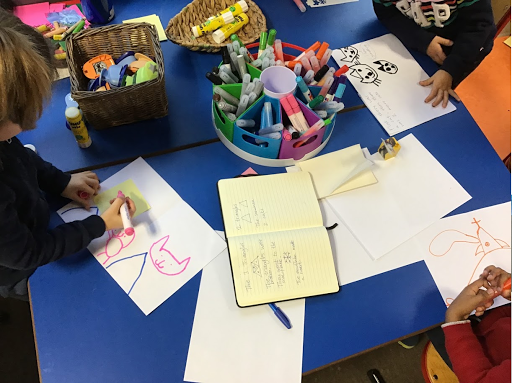 At some point, W decided this was going to be a number book. There was one cat on the first pages, and two cats on the next pages. It would carry on like that.

She wrote out the numbers, copying them from the wall. 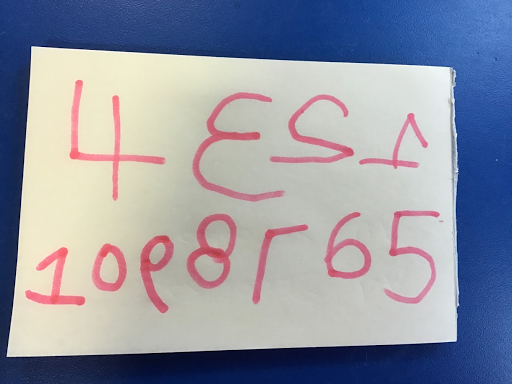 And into the afternoon: 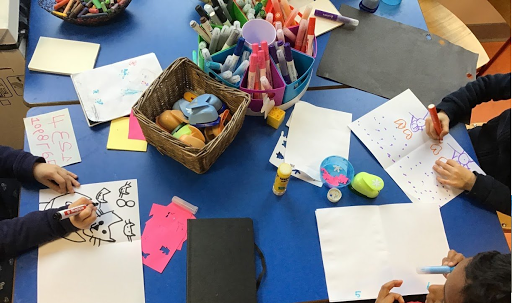 From seven onwards, there was a lot of counting and checking the numbers:
Z was really pleased with her book, smiling and laughing at how much she was writing and drawing, and loving her creations! The whole group spent about an hour on it in the morning and another in the afternoon. It was also a leap forward with writing numbers. Perhaps she needed the reason to use the numbers to be motivated enough to try and write them.
A week later, Z made a little book with some pretend writing. Estelle had been talking to me about encouraging her class that it was OK to do this, but, without a word from me, Z knew this was a good thing to do.
The book grew to be up to ten. Later she read her writing to me:
I wrote it all down in my story book, and read it back to her. Later she asked Steph to copy it all into her book. Again, she was really pleased with her book, and keen to take it home.
It's very interesting to me how different people's paths to loving numbers are. Counting is really working for some children, with our How Many? images going well, Pass it On and Numicon games are good with others, Numberblocks episodes are doing it for others (Numberblocks pop into Z's book at number 5, with a line from the number 5 song). For Z, a way in is being an author, and finding out that she could make substantial books that had an integrity of their own and would be exciting to share with others.
Since then, I've shared her work with the class, making some blank zigzag books available with numbers 1-7 on pages. I'm going to get some blank stapled books out on the table too.
Posted by Simon Gregg at 05:30 No comments: