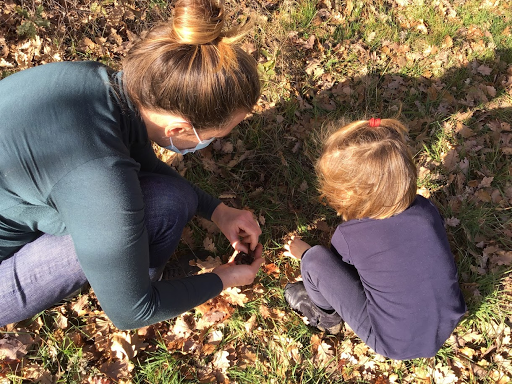 Back in 2015, Estelle and I ran a workshop on talk in the classroom. I was in Grade 3 (Year 4), Estelle was in Grade 1 (Year 2), and we were sharing ways we encourage students to talk more in our classrooms. To prepare for it we visited each other's classes, watched some established ways, and tried some new ideas too. 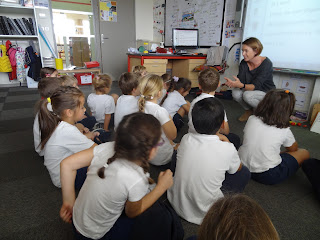 Estelle, as well as being a wonderful friend, is a fellow edu-geek. We read, we discuss, we even go to see the odd French education film like Le Maître est l'Enfant and Être plutôt qu’avoir?
Some things were working against student conversation in class back then. We teachers have some tradition behind us, and a lot of curriculum to get through. We end up listening for rather than listening to.
This distinction, listening for rather than listening to is one Helen Williams uses lots, but it seems to have had multiple origins. Max Ray-Riek was one of them, and if you have five minutes to think about this a bit more, this is a now classic talk of his:
I'm not sure how much we were thinking about listening to at that point. We were thinking about 'What do you notice? What do you wonder?' to hear what the students actually have to say, but we were very much orchestrating what lessons were all about and the kinds of things that might be talked about in them. I had discovered people in the mathematical Twitter world who were guiding me towards close listening to students. Estelle was and is a brilliant listener. But we were still listening mainly for the matter in hand, the curriculum content.
In June 2016, Estelle and I knew we were moving down into Early Years, Estelle as the coordiantor. We went off to Prague for a great few days on play. Estelle would be leading the Early Years through a lot of change, but I'm not sure if she knew how much change there would be.
That September, and for the next few years, I taught in K (5 and 6 yos). We still had specific mathematics lessons, for 45 minutes each morning. At the time, I blogged about the some maths aspects of this:

'There was a lot of space for the students own creations and explorations. I was keen to keep a sense of agency, and tried to respond to any initiative. This was as important, I feel, as the exact direction we went in. That sense of 'this is an inquiry we're following because B started us off with this; let's see where it goes' is something I really want to nurture again, and even more so, next year.'

Last year, Estelle and Rachel were in K and I was popping in, especially for maths lessons, in my role as STEAM coach. From September, they changed the mathematics so that there was a lot more choice in the range of activities available. Then in November, Rachel went off to Ljubljana for a play-based learning course, and when she came back she said they were recommending moving away from specific subjects at specific times of day and onto a continuous provision where children could choose what they engaged in for long periods of time. Estelle listened and was really responsive to the idea and Rachel's enthusiasm for it. In January, the K classes became more truly play-based, with children having a lot more choice.
As STEAM coach, I wanted to keep some record of the changes, so at the end of the month I asked Estelle about the changes. Here's a few minutes taken from that conversation:
It was not easy for me, this change. I had really enjoyed having a time with the K students each day where we would be exploring maths together. But of course, there had been a cost in terms of student autonomy and agency. Now children would choose more how to spend their time, and it would be our job to make sure the mathematics offer was atractive and just right!
The PYP (Primary Years Program of the International Baccalaureate) was changing too. In 2018, the PYP document The Learner described a major shift towards play for young children. Here's part of a table that describes the changes:

Actually, we were already well on the way to the right hand side, but there was more travelling to be done.

We've been thinking a lot about our pedagogy. During lockdown, we zoomed about Kath Murdock's Power of Inquiry. And when it was over, we met in peron after reading Anna Ephgrave's Planning in the Moment. 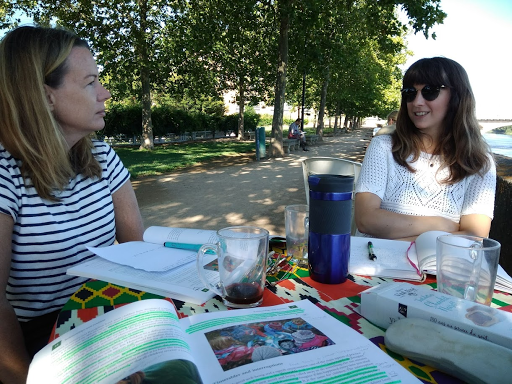 This year, we've been doing Saturday morning sessions with Anna Van Dam, debriefing afterwards to apply all the things we'er learning to our classes: 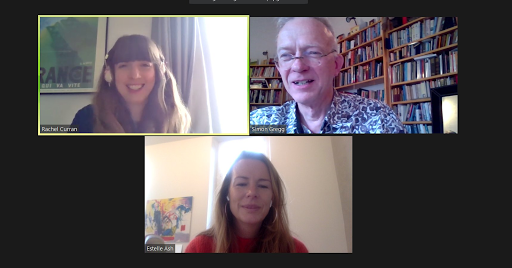 We've also discovered, and are loving, Vivian Gussin Paley's books.
And Rachel, Estelle and I are together in PK, with 3-5 year olds - in Sun, Star and Moon class! It's a kind of homecoming in some ways - finally the choice and playfulness that I tried hard to allow space for in lessons is the actual stuff of our time!

We're becoming more and more interested in listening to children. And finding out that our questioning is often not helping. Julie Fisher's Interacting or Interfering: Improving Interactions in the Early Years crystalised for us how some of the tools we might use in adult conversations, such as questioning, are often actually a hindrance with young children.

And as John Mason writes in the context of teaching mathematics:

"The secret of effective questioning is to be genuinely interested not only in what learners are thinking, but in how they are thinking, in what connections they are making and not making. Genuine interest in the learners produces a positive effect on learners, for in addition to feeling that they are receiving genuine attention, you can escape the use of questions to control and disturb negatively. Instead of asking for answers, which in most cases you probably already know, you can genuinely enquire into their methods, their images, their ways of thinking. In the process, you demonstrate to learners what genuine enquiry is like, placing them in an atmosphere of enquiry which is, after all, one view of what schooling is really intended to be about."

Especially as most of our young students don't have English as a first language, we're finding that watching can be an important part of listening. Seeing what our students do, trying to guess their lines of thiking.

Slowing the pace down, giving students our attention for longer periods of time.

Here's Estelle in the forest the other week. I managed to video part of a much longer conversation.

Young students like this don't usually respond well to the direct approach, to questioning. It's more about creating the conditions for relaxed conversation. Here Estelle establishes a slow pace, peeling open acorns, seeing that some of them have turned to powder inside, seeing that there are holes in those ones, talking about worms. It's a comfortable situation, and sure enough, a student begins sharing his knowledge about worms.

After this, Estelle starting delving for acorns that were beginning to grow. 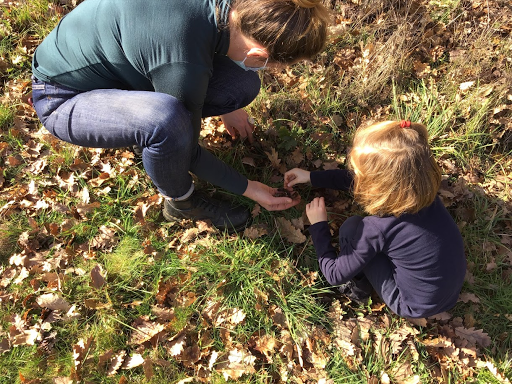 (We took some back to the classes, and there are some seedlings now!)

There's a quality to the listening which we sometimes get. There's a giving attention to whatever the student wants to say, in their own time.
Estelle, Rachel and I have been documenting 'Moments in the Day' - times when we watch a student at play, document it, try to see what learning is happening, and bring it to the EY group for discussion.
An example:

"G is sitting in the sun and holding up a jelly digit. What catches my eye is his quietness and his gaze on the object. I go over and ask what he’s noticed. I try to go carefully and softly with my interactions wanting to avoid taking over.
G says these things at different points in the play and conversation.
“I just cut it in half and it did that.
What is this? (holding up the digit zero)
Every time I do this it does that (points to two bubbles as they move in opposite directions when he presses his finger down.
I made four now (bubbles).”
Observations, sharing, trial and error, comparing across objects that are similar but not exactly the same. Counting the number of bubbles. Thinking about letters and numbers. It was G on the number hunt who was asking about the zero and saying it was an o.
A joins us:
“It’s broken into more!” Bashing it and making loads of tiny bubbles.
...There is a quality of being in the moment, attention and pause which was noticeable."Documenting together (and thanks to Anne Van Dam for encouraging us in this) is making us more keen to listen. Reflecting together on what we've documented is making us realise how much there is in what we hear.

We're all still learners in this art. We have to tell ourselves to leave space, to not do all the work.

It's kind of odd that it's hard for us. Estelle, for one, has listening as a superpower. I know how good she is at listening to me and other friends, and to colleagues at school. But, the challenge is harder now. Making space for students who, at 3, 4 and 5 years old, and are still building up the confidence to speak in English. Making our interactions carry little weight, to not swamp their tentative beginnings at expressing themselves.

Now at least, and at last, our antenae are twitching, waiting to hear what our students want to say, trying to read in their play the theories they are building. (Thanks again to Anne Van Dam for that emphasis. See the previous post for more on this.)

"In listening to others, accepting them in their irreducible difference, we help them listen to themselves, to heed the speech of their own body of experience, and to become, each one, the human being he or she most deeply wants to be." from D M Levin, The Listening Self, quoted in this piece by Brent Davis.