Back in Grade 3 (English Year 4) now. We've been doing quick dot images once a week, looking at the different ways the students see the images without having to count every dot. 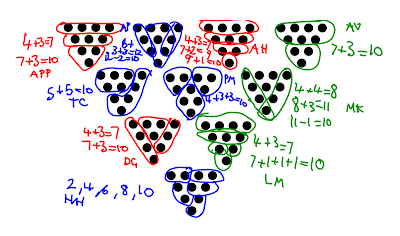 We've presented it to our parents and the school, from Grade 1 to 5, getting them to talk to each other about how they saw it.

It was time to try and count something bigger, to give the classes a bigger challenge. Could they use their ability to 'conceptually subitise' to help solve a more challenging problem? For a while I thought this would be a good one. The holes in the drain cover are conveniently - almost - in groups of ten 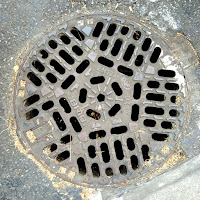 But then I remembered this pattern with Cuisenaire rods. It was one that had started off a wonderful discussion on Twitter (See Dan Finkel's vlog of it). But it had those triangles, a bit like the triangles of dots we'd just looked at. Would the students be able to use some of the pattern in this to make their counting easier? I was not sure whether this would be a bit too much of a leap... 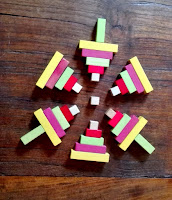 So we could write on it more easily, I photographed it again on white. 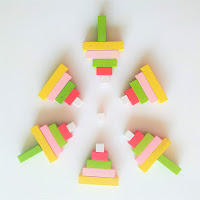 The question: if the white rod = 1, what is the whole thing?

Students worked in pairs to try and work it out. 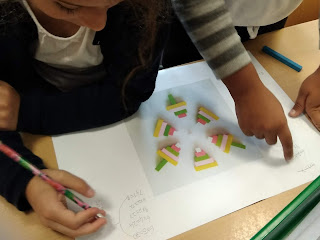 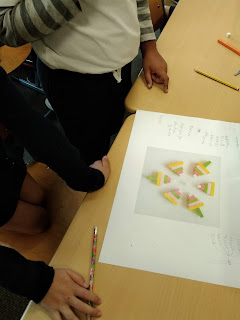 It was really interesting to get an insight into thinking. Tracy Zager has just tweeted a flow chart about mathematical thinking that includes the need for the teacher to see the students' thinking in some way.

This student had worried me a few days before when she'd asked me what half of 20 cm was. But now she was working out what three times 15 and three times 18 were. She didn't quite get to the correct answer, 100, because she didn't include the one in the middle. But she's done all but a tiny bit of the thinking! In fact, most of the students who got it wrong, were just getting one small thing not quite right. Her partner thought it was 102 because he counted the middle one three times! 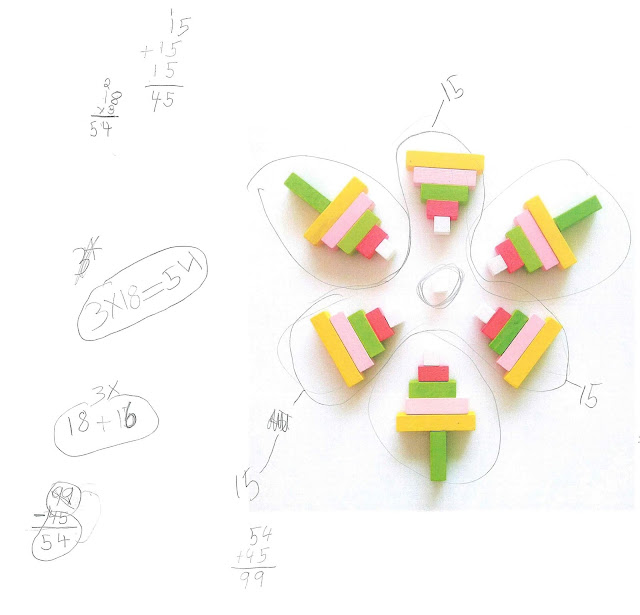 Another approach was to add up all rods of each colour separately and then total them: 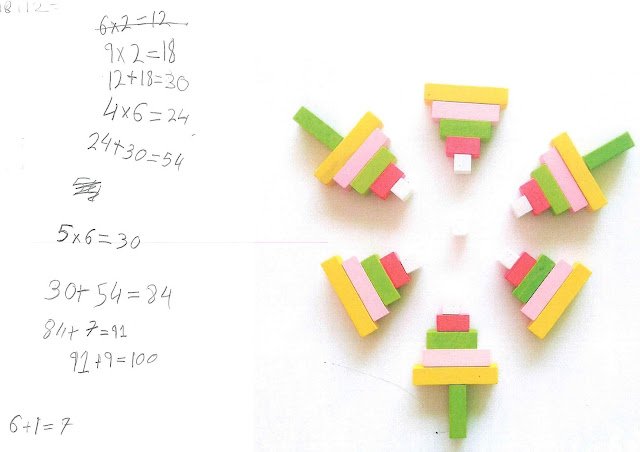 Interesting how they'd written the threes down as twos first of all, and then appear to have compensated for this mistake at the end by adding another nine on.

I pulled the class together and shared these two main strategies. I think in hindsight I would like to have dwelt on this more. I would have liked the class to have looked at what people were doing with the rods too, but it was all really busy! Perhaps we can return for a recap after the two week break.

Someone muttered something about failure. I'm not sure how convincingly I answered this. I said that I thought that even when people didn't get 100, they'd done a lot that was right on the way to 100. He seemed to accept this, but I'm sure there's more work to be done establishing a culture where we focus on showing our thinking rather than thinking about right/wrong.

What we did do was really interesting. I asked the class to make their own hundred pattern, so that it wouldn't need to be counted. (Not just ten orange rods, I said!)

There were all sorts of great approaches: 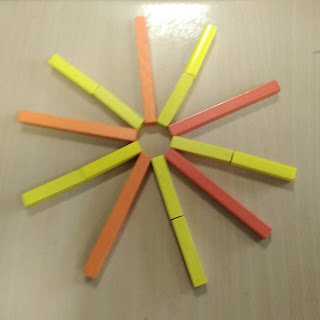 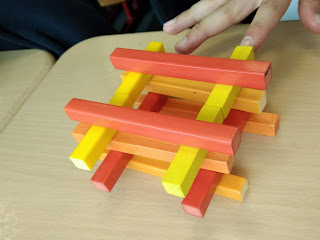 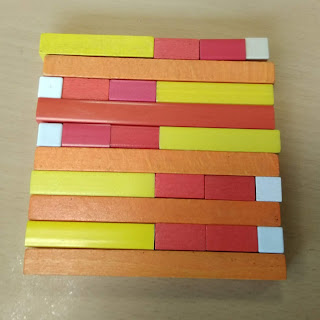 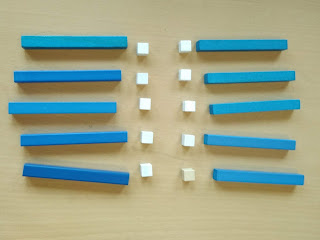 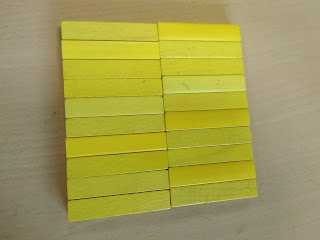 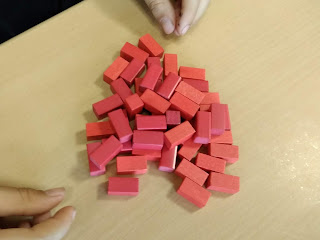 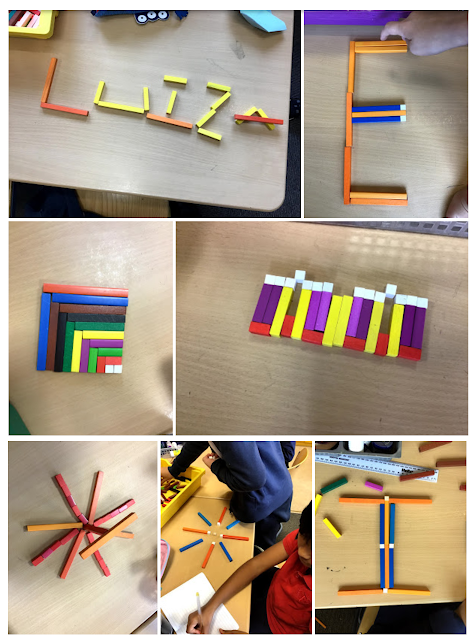 We had a look at that double staircase afterwards; it bothered someone that there was only one orange rod! 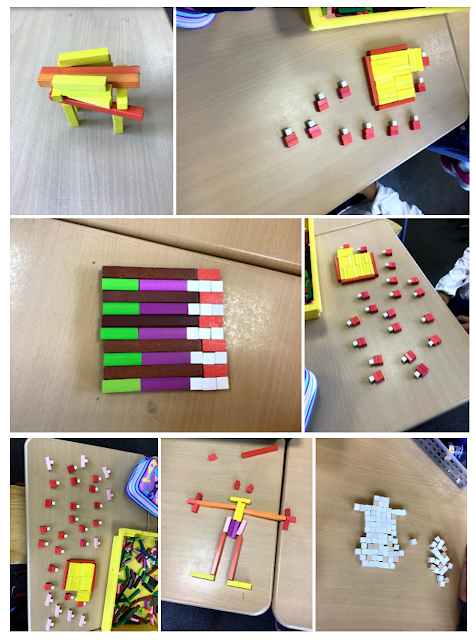 The student with the yellow circle was making more hundreds, this time making his fives differently. I wish we'd looked at this too. I would have liked to give him credit for not just doing what I'd asked, but for taking it further and trying a variation. We talked about the person, and some students asked me if we could have a go at doing some like this. There wasn't time this time, but I'm so pleased how many different kinds of creations there were, and also that there was talk of coming back to it in a different form! (Time for some #hudnredface images too perhaps?!) I was pleased that there'd been a lot of choice in the two tasks - first in how they solved the question of what the picture represented, then of how to represent 100 differently. There had been so many different approaches to both!

One thing. There were mistakes. But a lot of them were what you might call silly mistakes, ones that the students realised were wrong as soon as it was mentioned. Counting the central white rod three times. Putting just eight tens in their design rather than ten. We all make mistakes like this, and maybe we can as a class get more forgiving about them. Also, having more practice with seeing numbers and counting flexibly should make the mistakes happen less often.
Posted by Simon Gregg at 14:37 No comments: