When I put this model of learning down this morning it was fine.

I go away for five minutes, and when I come back someone had knocked it over:

Whoever it was - I don't want to know - just be more careful with my models.


Perhaps I should explain myself. This model (link to source) seems to start at the bottom and build up. But the first layer, Remember, looks to me to be a poor start to a lesson. Some present experience - an image, a video, manipulatives - that embody things learnt before would be a much better starting point. The very question, "Do you remember when we learnt about..." seems to me to suggest forgetting.

Luckily the makers of this diagram have actually built the instability of the model into the picture!

Perhaps I've got it wrong, and misunderstood the whole thing. If you think so, let me know.
Posted by Simon Gregg at 23:50 No comments:

In maths teaching it seems we often feel we're being asked the question Why? What is maths good for?

Derek Haylock gives five good reasons for teaching maths in Mathematics Explained for Primary Teachers:
But I'd like to look in a different place for answers, back to Antiquity, to the Greeks, who in some ways started it all.

The story, of "the Delian Problem", retold in Have You Been to Delphi?  by Roger Lipsey gives a surprising answer to the why question:


Devastated by a plague, the people of Delos sent an embassy to the Delphic oracle. "What must we do to halt this terrible plague?" they asked.

Double the size of your altar. 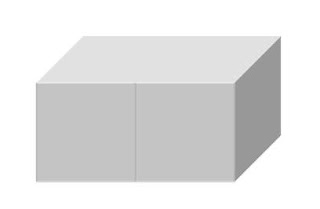 The instruction seemed straightforward. The embassy returned to Delos, gathered the city's surviving craftsmen, and explained the task.

The craftsmen set to work. Their first impulse was to add a second altar of the same size to the existing one. They may well have done this — the sources are uncertain. What is certain is that the plague raged on. "The god," they concluded," must mean for us to replace the altar with one twice as large." 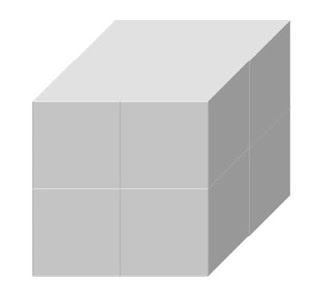 They set to work again. Measuring each side of the existing altar, they doubled all of the measurements and began construction — only to realize after the first courses of marble had been laid that they were actually making an altar eight times as large as the previous one. There was something wrong with the calculations.

The plague raged on. Hearing that Plato was returning from Egypt, they cheered up. Plato was one of the foremost geometers of their generation. They sent a delegation to overtake him at Karia. They explained their difficulty and the utter urgency of solving the problem. Smiling, the philosopher assured them that the answer was near at hand. Gathering the men around, he took a stick and sketched in the sand how to derive two mean proportionals from the existing dimensions of the altar. These lengths, and these alone, would permit them to double the altar.

"You know," added Plato, I cannot agree that the oracle was saying only 'do this thing, meet this challenge, and all will be well.' The message is larger than that. The god is telling you and all Greeks, that if we cultivate geometry and all branches of learning we will have greater welfare. We will not be just warriors but students of the Muses, men of peace."

I love what Plato says. Not just warriors but students of the Muses, men of peace. Where that fits in Derek Haylock's five I'm not quite sure. Intellectual development I guess, though it seems broader than that. (I also find the linkage between this new kind of thinking and the decline of violence really interesting.)

I've been asking, "What do you notice? What do you wonder?" lots as starting points for discussion this year. I've even decided these questions were so important that we needed mascots for them - and we spent a little time creating them: Nautilus and Wombat.

Wondering isn't just a handy tool in the classroom. Proper wondering, and real noticing allow us to be our own people rather than someone or something else's tool. Aristotle said it really well:

"That it is not a science of production is clear even from the history of the earliest philosophers. For it is owing to their wonder that men both now begin and at first began to philosophise; they wondered originally at the obvious difficulties, then advanced little by little and stated difficulties about the greater matters, e.g. about the phenomena of the moon and those of the sun and of the stars, and about the genesis of the universe. And a man who is puzzled and wonders thinks himself ignorant (whence even the lover of myth is in a sense a lover of wisdom, for the myth is composed of wonders); therefore since they philosophised in order to escape from ignorance, evidently they were pursuing science in order to know, and not for any utilitarian end. And this is confirmed by the facts; for it was when almost all the necessities of life and the things that make for comfort and recreation had been secured, that such knowledge began to be sought. Evidently then we do not seek it for the sake of any other advantage; but as the man is free, we say, who exists for his own sake and not for another's, so we pursue this as the only free science, for it alone exists for its own sake."

It's quite an odd perspective from our point of view (maybe it was in Antiquity too). We're usually more impressed by the sportspeople than the spectators: they've put a lot of training in and they're showing what the human body is really capable of. I certainly prefer doing sport to watching it. We tend to think that doing is better than watching, in all sorts of ways. But the idea of spectating, or watching, was really key to these philosophers, and we've inherited some of its importance in our education as well as in our entertainment. The word for spectate here is θεωρεῖν, theorein, from which we get our word theory:

from Greek theoria "contemplation, speculation; a looking at, viewing; a sight, show, spectacle, things looked at," from theorein "to consider, speculate, look at," from theoros "spectator," from thea "a view" (see theater) + horan "to see," possibly from PIE root *wer- (4) "to perceive" (see ward (n.)).

So, standing back and watching, considering... perhaps coming up with a theory...

This all contrasts very markedly with the view of maths, and all subjects, as what Aristotle calls "sciences of production".  A view in which the subject is like a road that starts off with learning numbers, goes through addition facts, times tables, algorithms and definitions, onto formulas and nomenclature to memorise, tests and exams, a certificate, a job, a useful contribution to the economy. A road that must be embarked on early and hurtled along swiftly.

Let's see where this ancient view can take us. Spectating... noticing and wondering. Take your time, enjoy the scenery...

There was time for this

I pondered whether to do it, and decided Yes! We did make a start on our popup cuboids. We made the cubes. 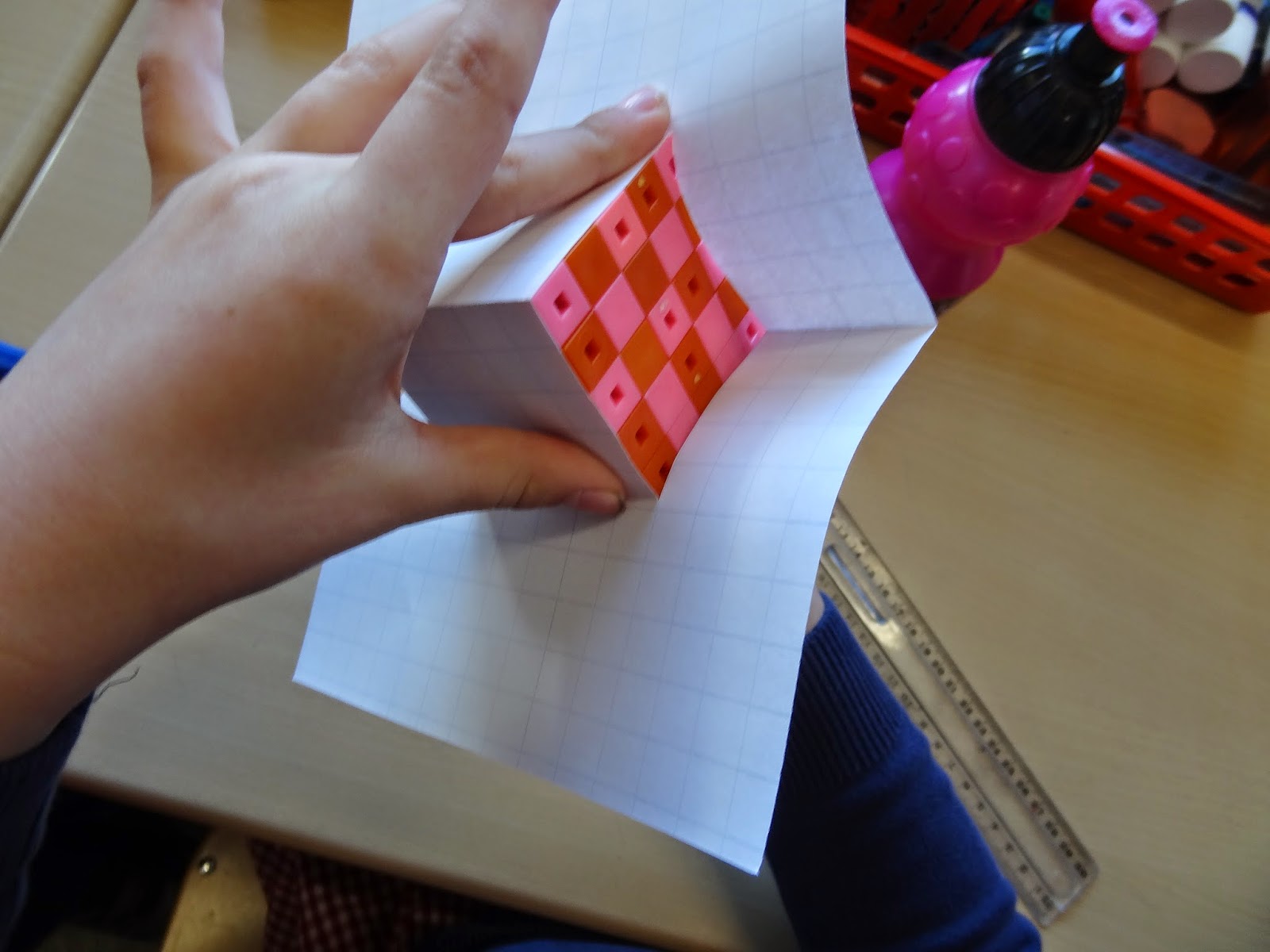 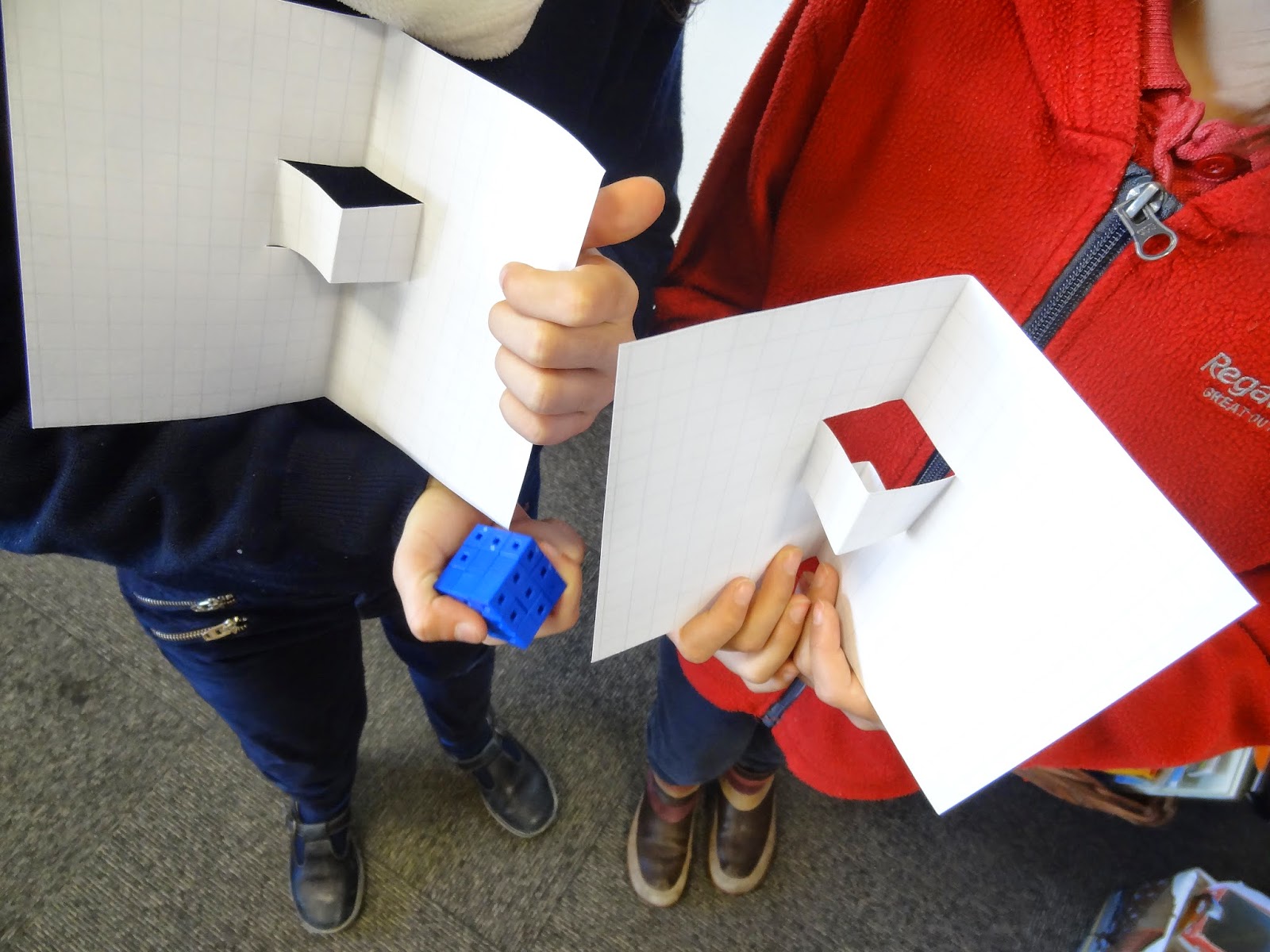 I decided that as there was a fair bit of arithmetic in it too, it covered a lot of bases. Working out the surface area, and the volume, usually involved a one digit X two digit calculation, and it was a chance to remind about grid multiplication in a context. 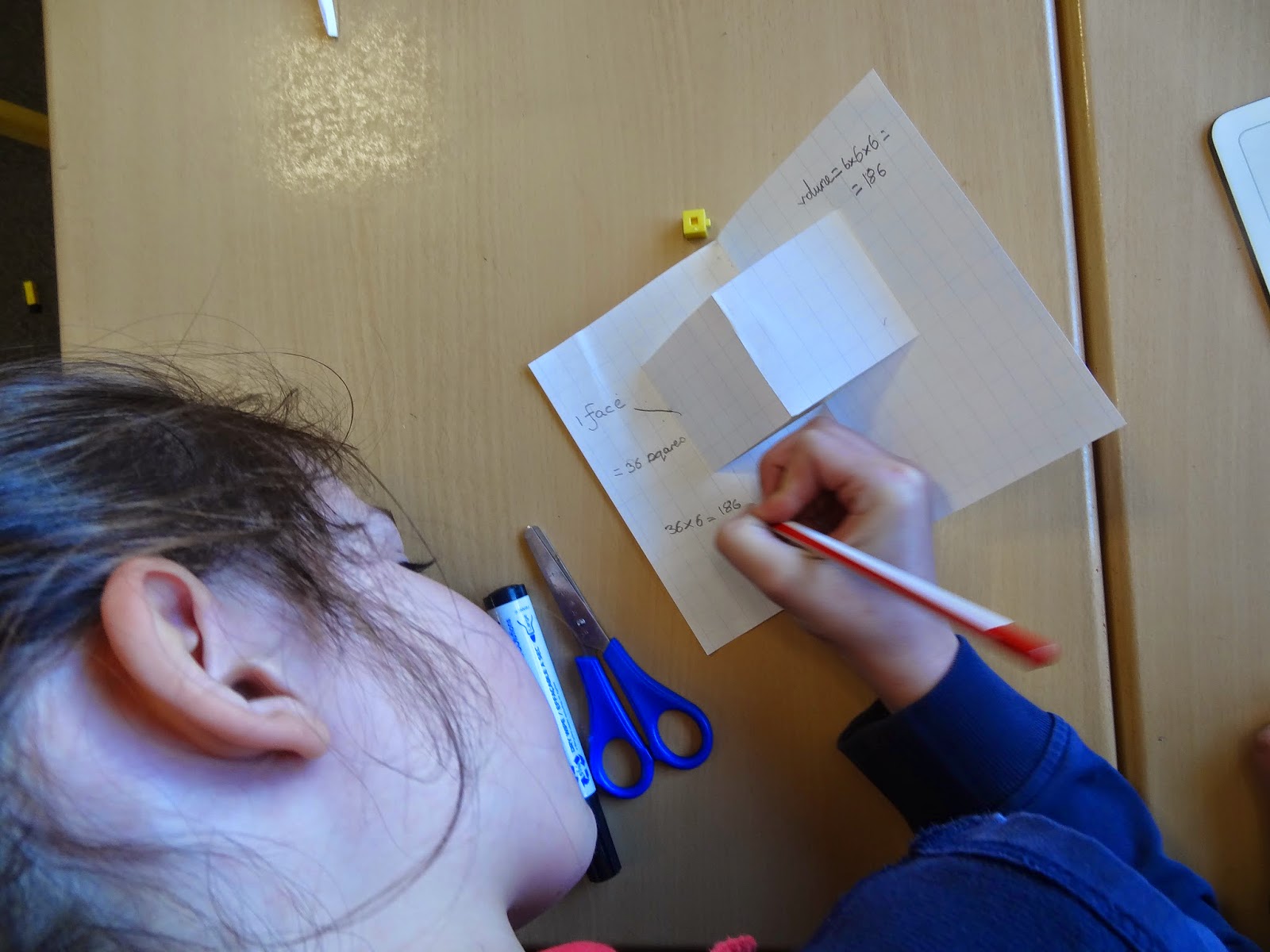 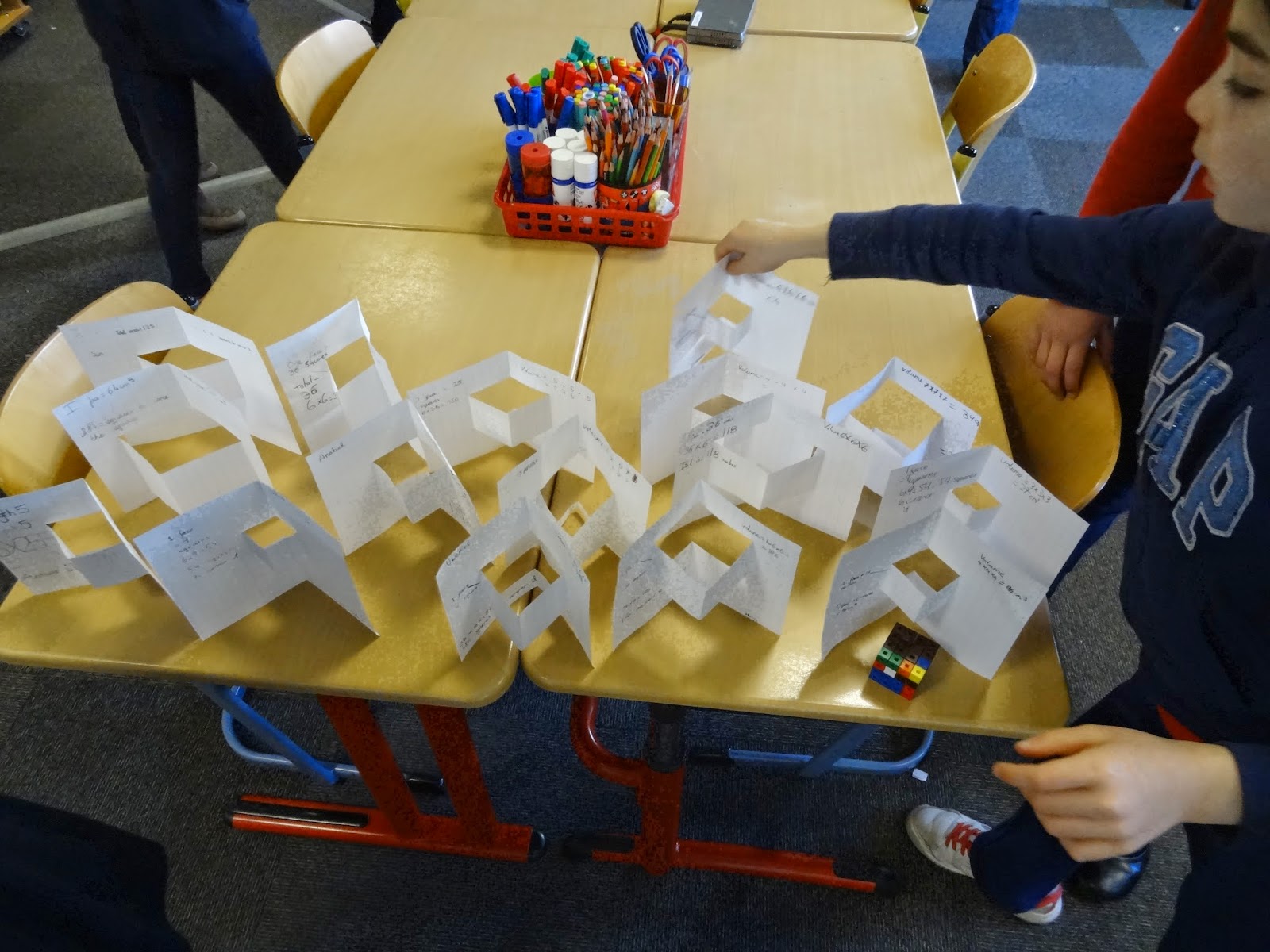 They would make a good book! I would also really like to make to get the class struggling with making non-cube cuboid popups. Doing this involves getting to grips with how a cuboid works (opposite faces being the same).

The children who finished quickly I steered towards making some cuboid pictures with pattern blocks: 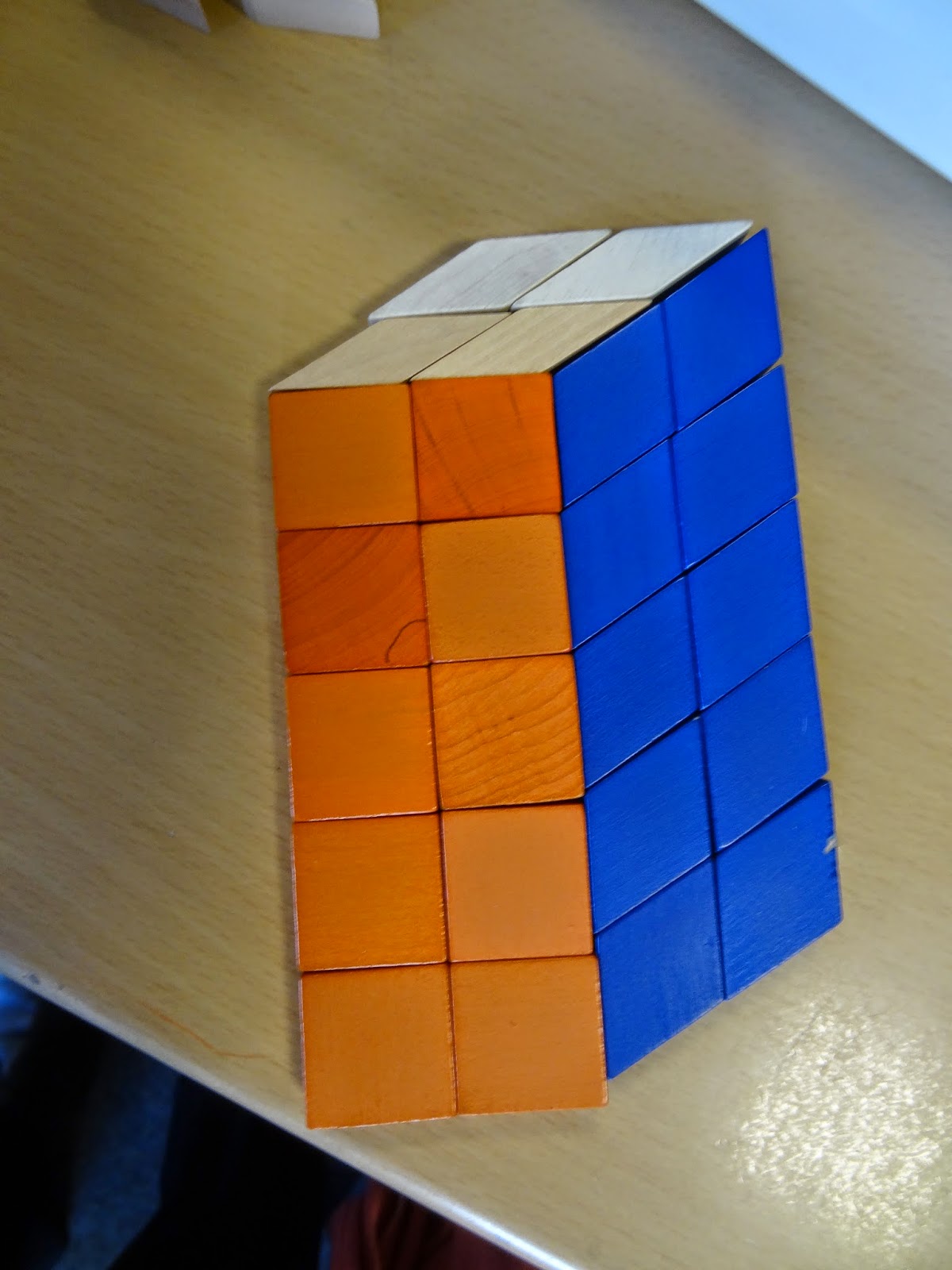 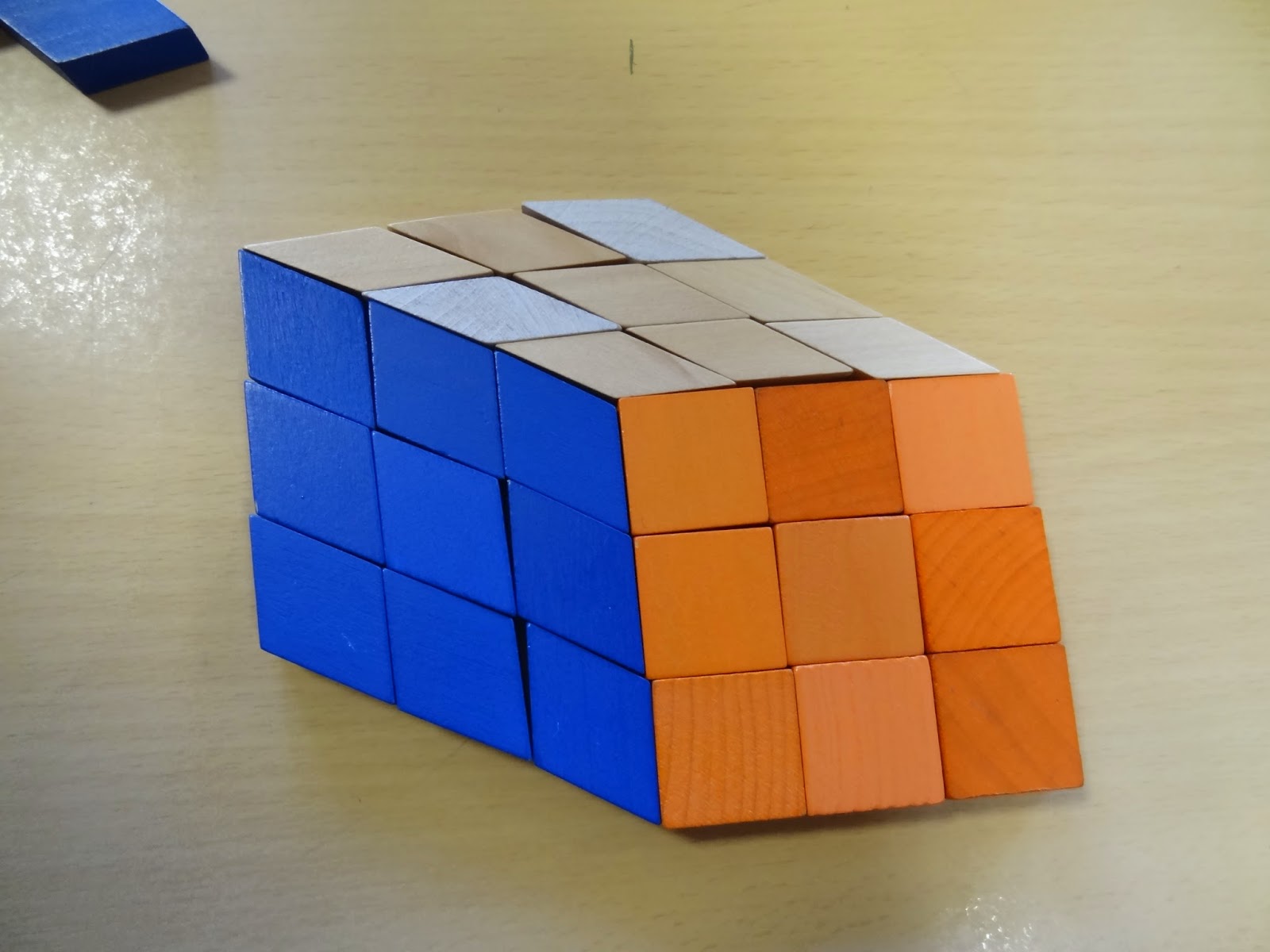 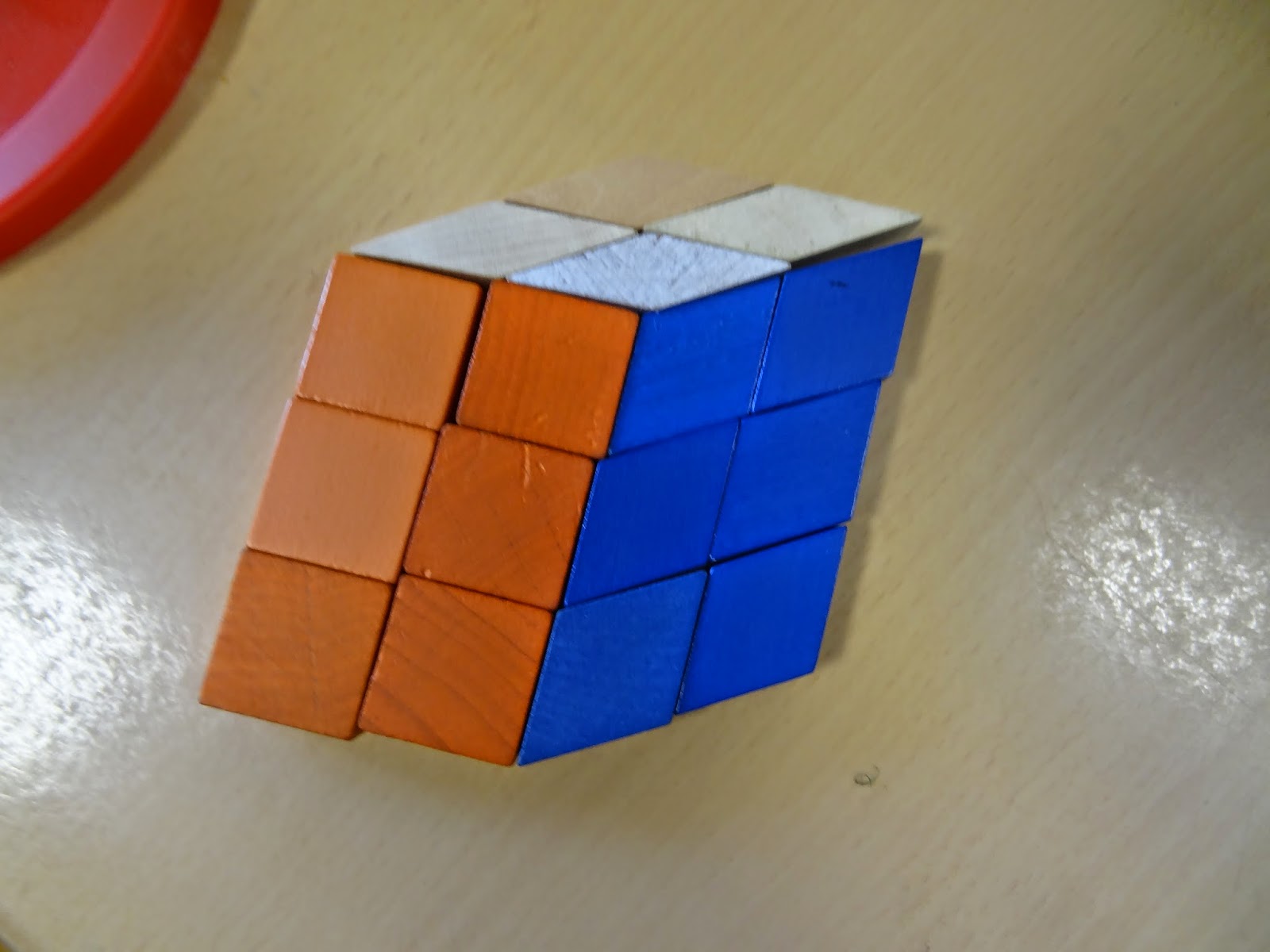 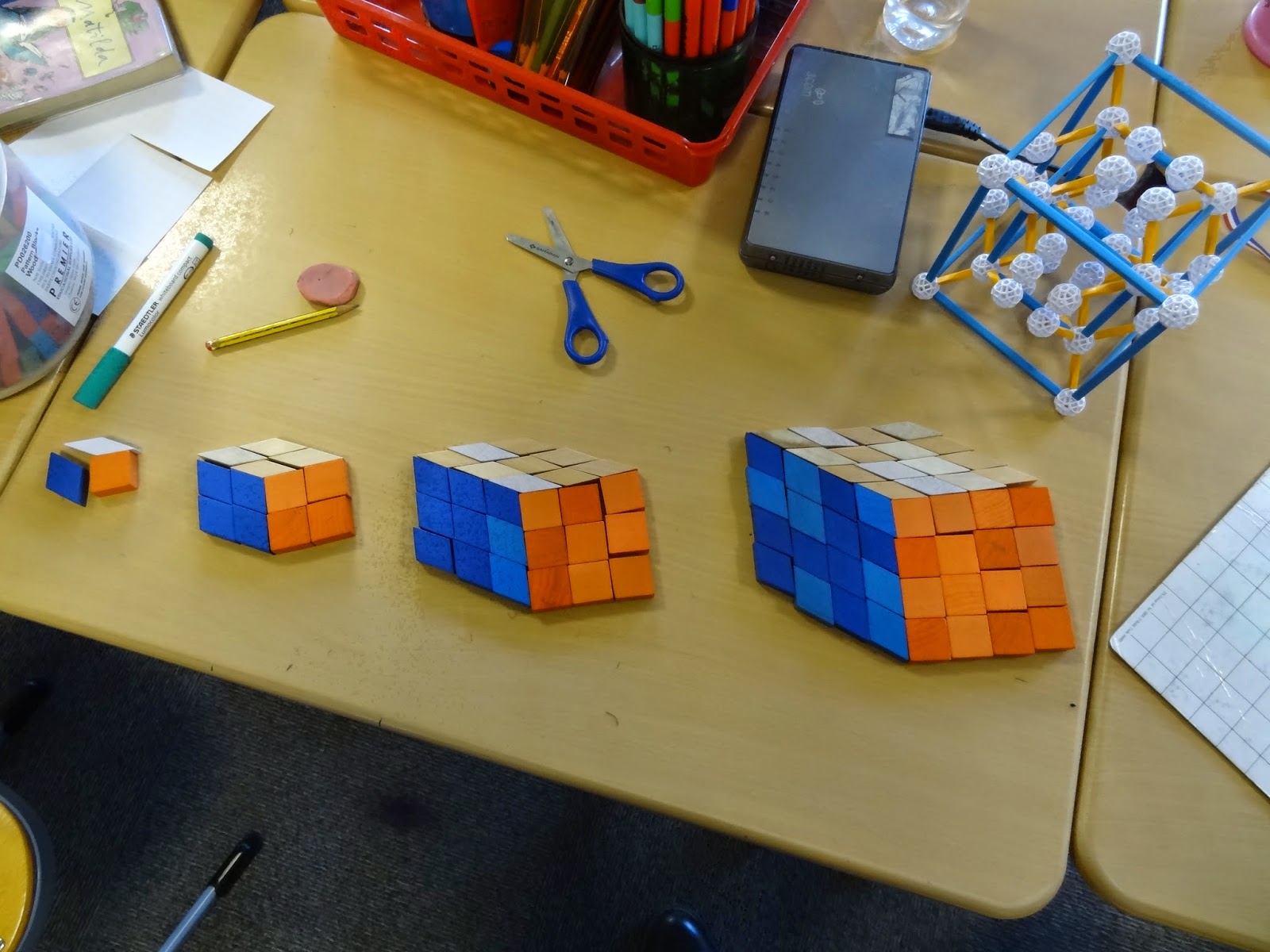 This is something I'll maybe do more systematically next year (if I'm teaching around this age).
Posted by Simon Gregg at 08:33 2 comments:

We've already done more than usual about cuboids, designing and making our fruit juice cartons, and then making them with cm cubes and using isometric and squared paper to represent others. 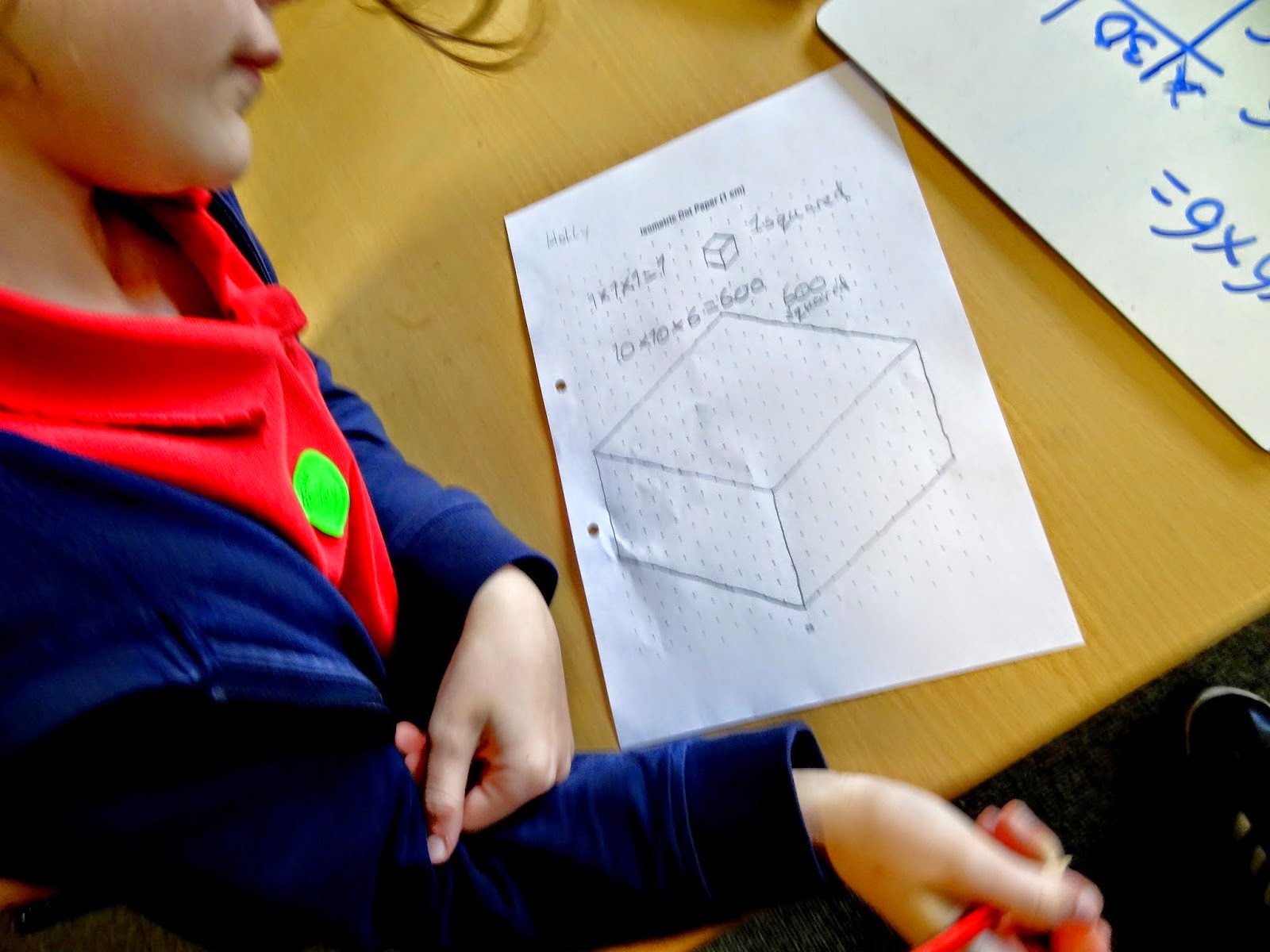 There were other things I would have done had time allowed. One is to create similar representations in pattern blocks, like those of Daniel Ruiz Aguilera, but simpler:

Another was to use Paula Beardell Krieg's colourful isometric collage. 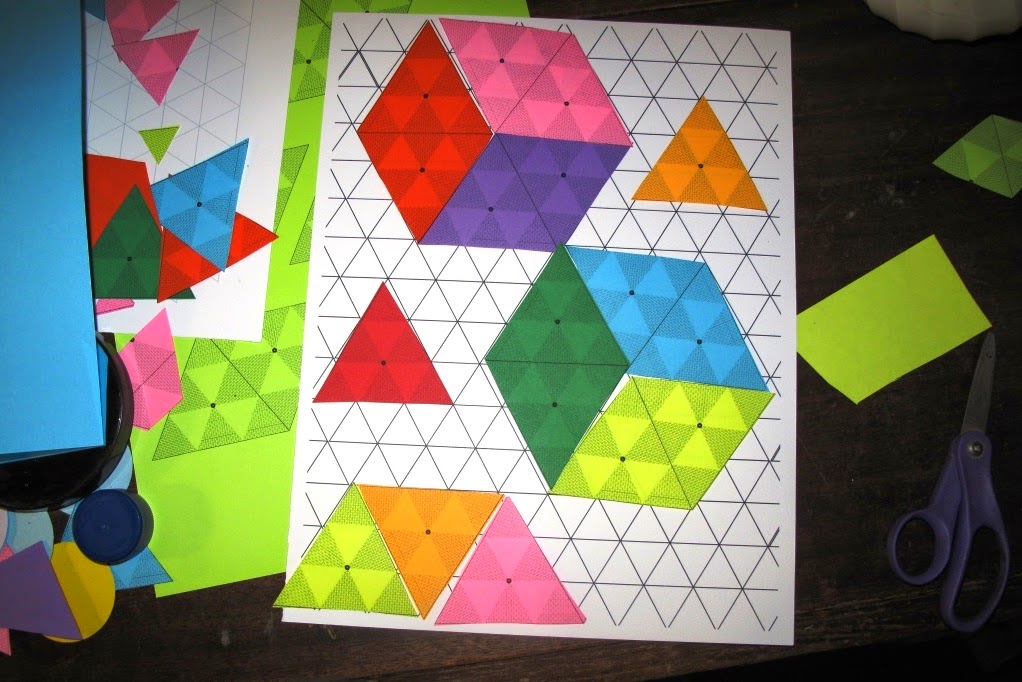 I've come up with another idea (after admiring lots of posts on Paula Beardell Krieg's Playful Bookbinding and Paper Works blog, and after making popup chicks for Easter cards), that I think is a good one: popup cuboids. 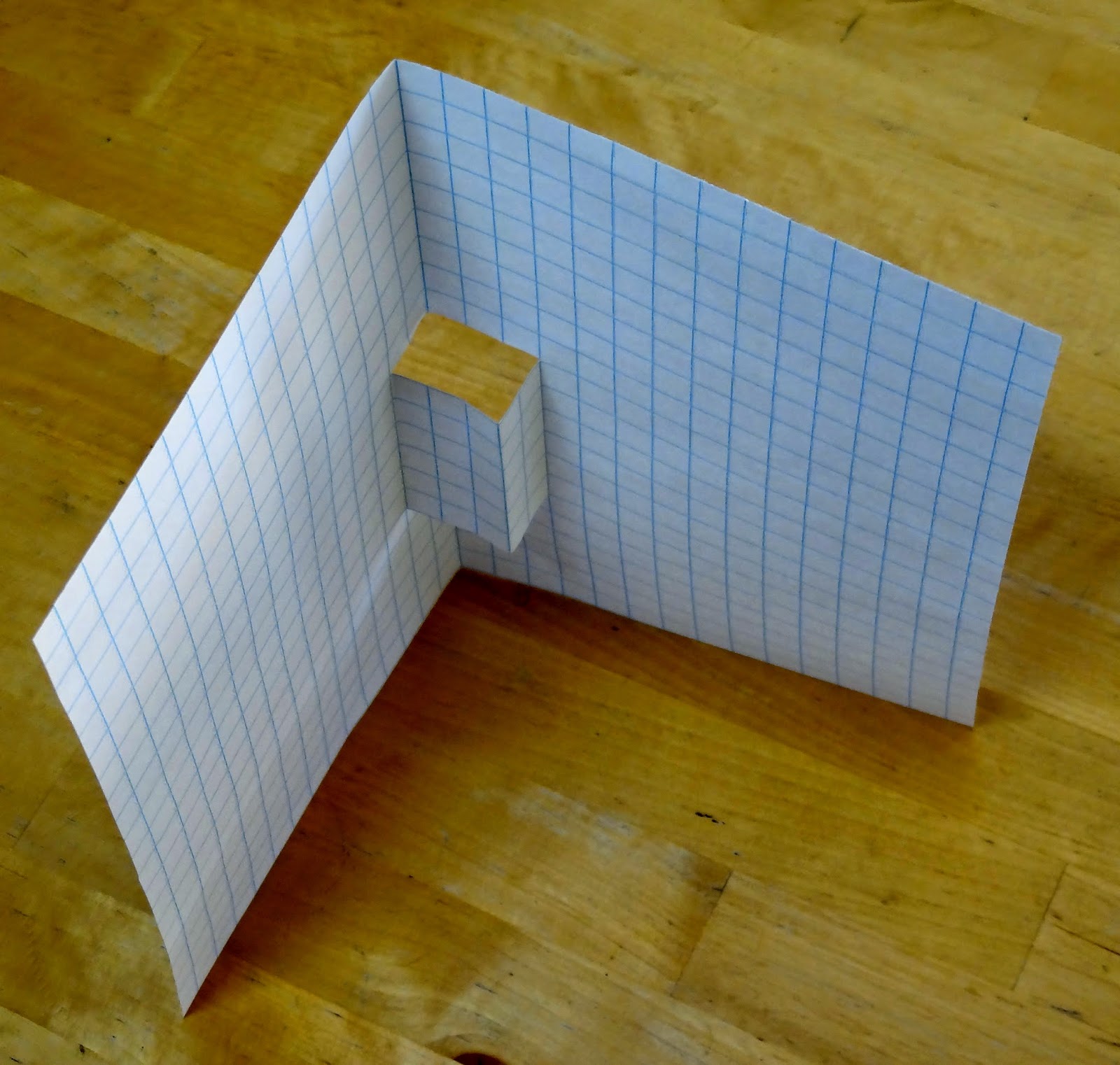 I'm hoping that other people can also see that there's a cuboid outlined in the middle of the fold. It's a 3cm x 2cm x 6cm cuboid (albeit with top and bottom faces made of air). Here it is, made with the NCTM isometric drawing tool:
So, if I decide there's no time this year, this can be a note to self as well as anyone else. Here's what I'll do.

I'll show another example with a cube. Ask students to:
Then I'd display the results with the cubes and next show a cuboid like this and ask them whether it's possible to make a popup version of it. This is a little tricky because if all the dimensions are different you can't use that first central fold. Some experimentation would be essential. If someone finds the way - great! We'll go ahead and do roughly the same list of things I wrote for the cube.
Posted by Simon Gregg at 03:04 2 comments: