In PK, we've been watching the first two series of Numberblocks. These present the numbers zero to ten as different characters who, by the normal rules of arithmetic portrayed dramatically, have the power to transform into one another. If you're not familiar with Numberblocks, you could watch the first two minutes of this video. (You don't get full episodes on Youtube, you get composites of a number of episodes. We've watched Series 1 and 2 on DVD and on Netflix.)

Our young three to five-year old children like it so much, want to watch episodes again and again, go home and watch further episodes.
Numbers are represented as arrangement of cubes. All sorts of things become clear like this. Number as area. Addition as combining, subtraction as splitting. Odd and even-ness à la Numicon. Square numbers. Arrays of numbers. All sorts of interesting avenues for investigation are opened up. For instance in the clip above, the numbers are represented as different polyominoes, different arrangements of squares. What tetrominoes are possible? I'm a fan of figurate numbers, of area-as-number (have I talked to you about Cuisenaire?) because I find it gives children a powerful way into number and arithmetic.
Numbers as character and narrative. We all love a story, and the Numberblocks stories are well thought out and entertaining. They also work because of the mathematics. Again, in the Strampolines episode, the story is about what different arrangements are possible. 'One' is sad because she can only make one arrangement, but is cheered up when she learns that copies of herself make up every arrangement (polyomino factorisation anyone?).
The animation and the music. Yes, we sing along to the songs!
The equations that emerge as numbers transform are represented flexibly. So we don't just see 4+1=5, we see 5=4+1, and also 5-1=4. Children get a sense of what equality means, and they also begin to see how equations relate to arithmetic before having to write them themselves. Often they want to write equations, and it's something we've built on to give the power that writing ones own ideas brings. 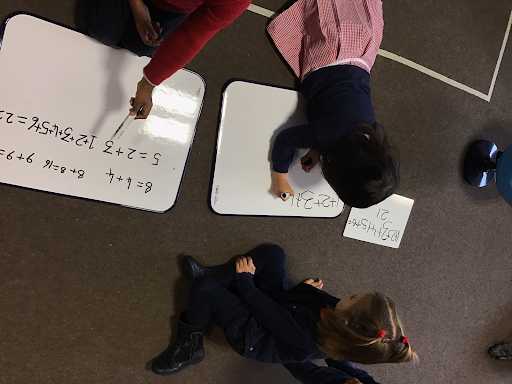 Students enjoy recreating and exploring what they watch. Here, for instance, a four-year old student observed that 25 is a square. 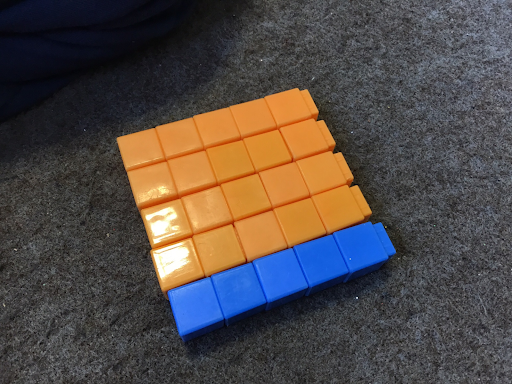 I pointed out that there seems to be one missing, and he had a good think about that: 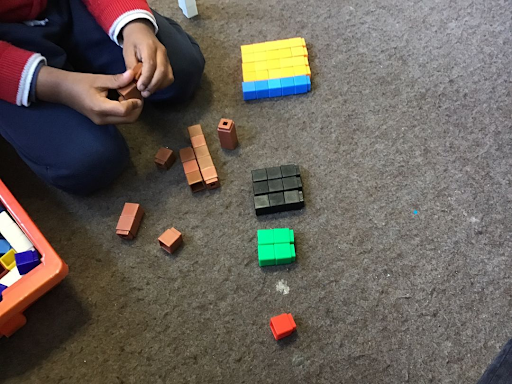 One piece of evidence about how well it's worked for the students, is doing 'Number of the Day' with them on the first day of their next year in Kindergarten. I've been able to pop in and work with them on this. In the past, students have been a bit blank when we've asked them what they know about 1, or have commented on what its shape makes them think of, but this year there were equations.

By day eight, with a bit of help from Cuisenaire rods, the equations were really flowing. 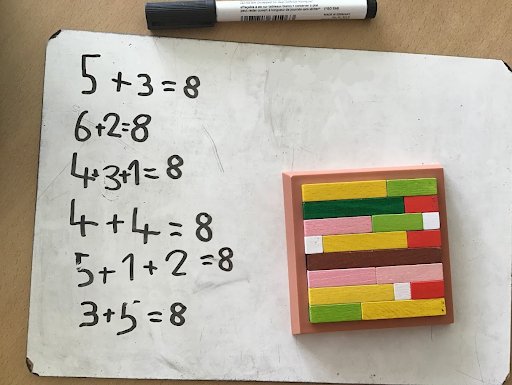 And here are the day 9, here are lots of the ideas the Kindergarten students shared:

So, a big thank you to the Numberblocks team, and also to Debbie Morgan who has been their chief mathematical advisor.
Posted by Simon Gregg at 10:06 No comments: