Three of my new students (aged 3 and 4) have been settling in this half term. They have been doing lots of playing alongside each other, but this was one of the first times they cooperated on a common project, building a house. 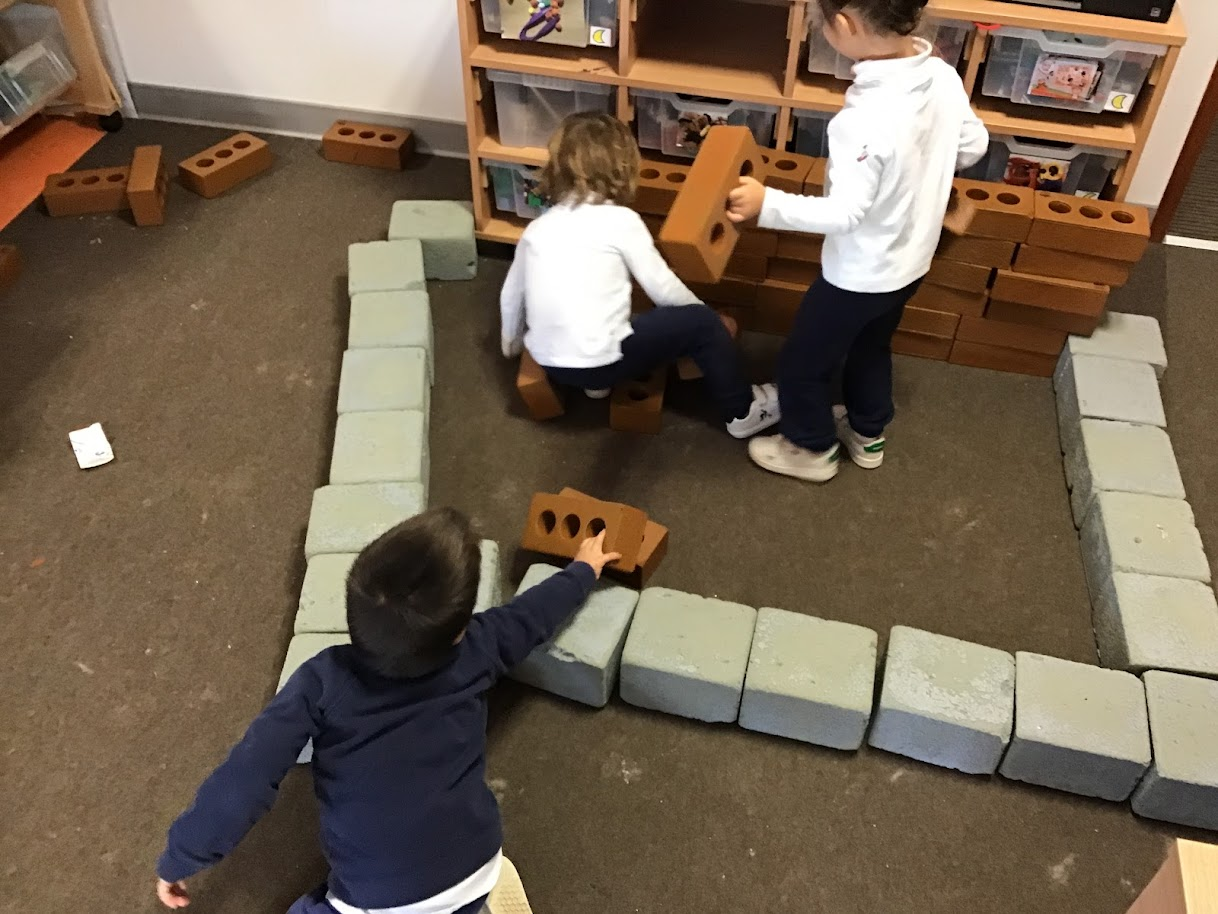 The conversation was in Spanish, so I couldn’t benefit from it. Once it was built, they had encircled themselves and they enjoyed being in the inside they had created and furnished it with sundry items to make it more of a home: 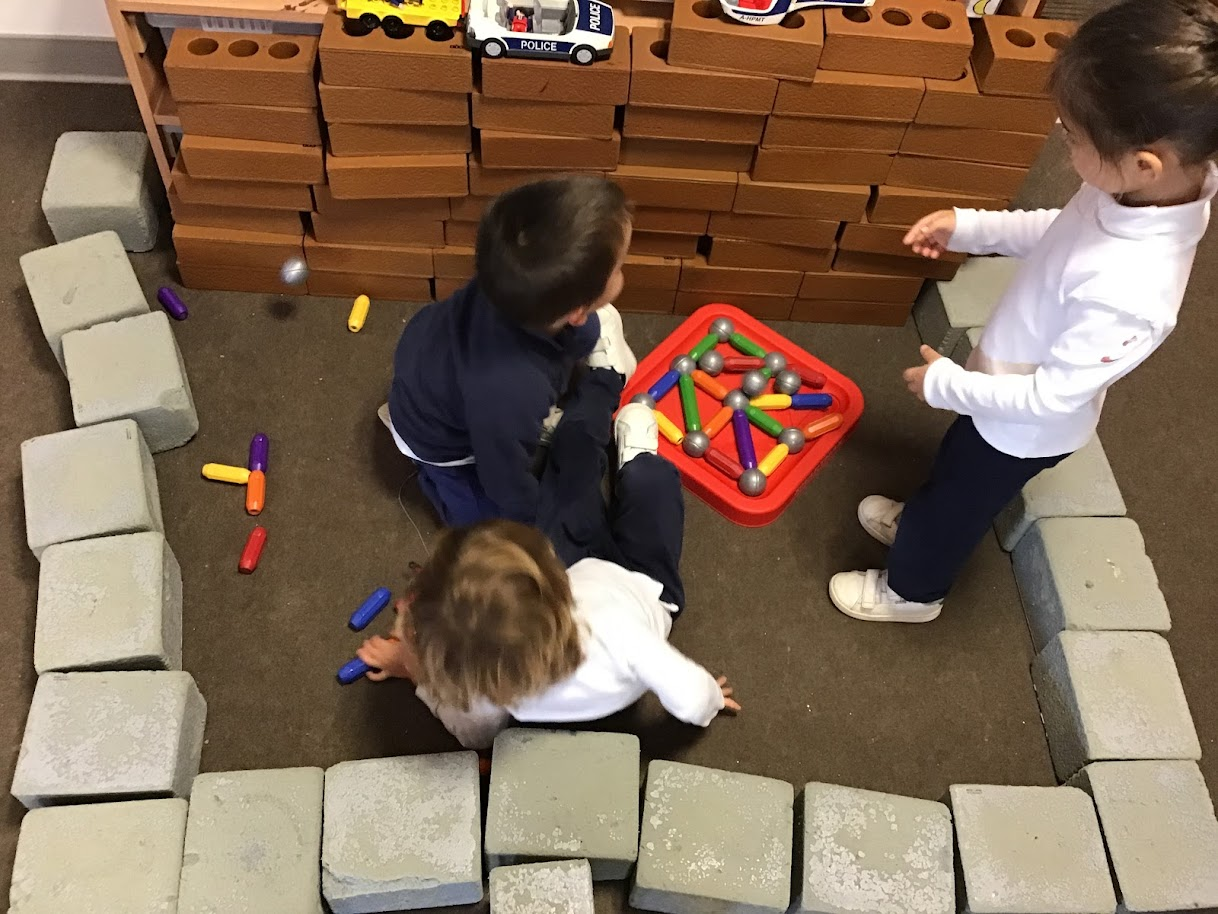 Our early years team have been working with Anne Van Dam, looking at what ‘working theories’ the children are developing in their play. This follows the work of Helen Hedges.

“Working theories are present from childhood to adulthood. They represent the tentative, evolving ideas and understandings formulated by children (and adults) as they participate in the life of their families, communities and cultures and engage with others to think, ponder, wonder and make sense of the world in order to participate more effectively within it. Working theories are the result of cognitive inquiry, developed as children theorise about the world and their experiences. They are also the ongoing means of further cognitive development, because children are able to use their existing (albeit limited) understandings to create a framework for making sense of new experiences and ideas.” (Hedges & Jones, quoted here)

This concept of working theories builds on the work of Bruner, Claxton, Gopnik, and Vygotsky. It sees children as actively building their understanding through the thinking and play they do. I like it a lot for its respect of children's thinking, seeing the active way in which children make sense of their worlds.

And yet... there's something in the fit of this to the kind of loose parts play that doesn't feel quite right. I can't put my finger on it exactly...

These are not once-for-all understandings that are achieved and then we move on, but ones that grow and grow through students’ time at school. That enclosing is a schema, ie a repeated behaviour, seems to indicate that the understanding that is built up doing it is something that needs to grow incrementally and be connected with lots of other thoughts and experiences.

The more experienced children in the class seem to have this understanding much more firmly, and to build and create together with so much more ease.

But, like so much of children’s play, it doesn’t seem to be directly pursuing a question (like ‘Where do birds sleep?). Outwardly, it’s more directed towards making, production than it is to finding out. They are, ultimately, finding out, but the immediate impulse is one of creation. In this way the play seems to have more in common with the arts than with the sciences.

This is a thought that I’m still mulling over.

And now this sketchy diagram that I’ve drawn is making me think. The impulse to create, to make, to perform, to challenge oneself allows a feedback loop. It puts the results of our action (beige in the diagram) into the world as something that we can observe. A kind of design cycle. We are building up theories about the kinds of achievements we can have in the world.

Helen Hedges writes ‘Learning may appear somewhat disorganized, perhaps appear to move around and then return later to topics, questions and ideas, may call on invention and imagination to connect ideas…’

To me, most learning is disorganised, full of imagination and invention. So much of learning, of building theories, is devoted not to how the physical world works or even to social and cultural learning considered as learning what’s already there. A huge amount of learning seems devoted to managing possibility. I have these materials - what could I do with them? How might I deploy them, arrange them? I have this time with my friend? How might I fill it? I’ll learn to wildly invent, to put some unheard-of combination boldly into place - and I’ll see what happens then.

What I’m trying to get a grip on doesn’t seem to simply reduce to dispositions though. It is a more disorganised-seeming, less direct way of obtaining knowledge about what daring and playfulness can achieve, what can be done with freedom and within necessity, how the social and physical environment can be remixed. It centres around agency, and uses whatever is at hand to achieve its undefined aims. It achieves its goal of developing capable and skillful being and making in the physical and social world, but its means are more indirect than what comes to mind when we think of theory-building: curiosity -> question -> search -> answers.

This simple house the children make seems to bring so many aspects of learning together. Mathematics is in there too. The straight line of the bricks, the way they are placed in the same orientation, and on top of each other to create layers. The way the lines of bricks are parallel to create the rectangular floor plan, and how the cars are arranged, spaced out evenly.
That word arrange. It means both to place things by some kind of design, and also, metaphorically I suppose, though we're no longer conscious of any metaphor, to organise anything in life.
Maybe the play follows a similar path to the way the word has travelled? We play at organising loose parts, we learn, ultimately, to organise our lives, whatever the variables it gives us.

And now I'm curious what the roots of that word arrange are:

Ah - putting something in a ring. And there's the word rank, like ranks of soldiers.

It's always fascinating to see the proposed Proto-Indo-European root of a word, and all the offshoots of that:

I find this nexus of related words more than interesting. It's almost as if play recapitulates etymology. We encircle ourselves with loose parts, we line them up in ranks, and doing this we are researching, building working theories about our own agency, our abilities to work with others to build a home, our abilities to arrange matter and matters.