We're reading Kath Murdoch's great The Power of Inquiry, my friends-and-colleagues Rachel and Estelle and I. We've had some really nice Zoom meetings chatting over chapters.

The Primary Years Programme of the International Baccalaureate, which our school follows, gives a central place to inquiry - and yet, and yet, on the ground, old habits die hard. The book challenges us to think how inquiry works in practice, what we can do to make it more of a reality in the classroom.

We've jumped about. We're reading Chapter 3 at the moment - 'Beyond Topics'.

On page 40, Kath Murdoch lists features that characterise most journeys of inquiry:

One of the things to strike me was that these describe well how I see lessons that involve thinking mathematically.

(For the third point, about real-life experiences, I have a qualification to make: mathematics, as well as describing many real-life situations, is an abstract study in its own right - a little like some art and music are. It's not always, or even mostly, going to be about real life.)

Kath Murdoch gives some examples of Mathematics inquiry questions:
...and many more.

These are big questions, but on a much smaller scale, small moments in the mathematics lesson can also show the same features. I want to write briefly about some examples, in this case with young learners in playful, child-initiated contexts. 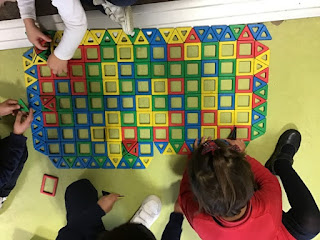 Here are some of our PK children (4 and 5 years old)  making a kind of carpet. They've put lots of square magnetic Polydron together, and now they're adding a triangle border. It was initiated, and completed by the children without any input from the teacher.

They haven't stated a question in words, but play like this is purposeful, and you could say it's investigating an implicit question. Something like, 'Is it possible to make a really big rug out of squares and then round it off with a border of triangles?'

If I was to extend this with the children, I might want to show the class the image of what was created and invite comment. I might ask if other sizes could be made. What is the smallest rug like this that's possible? How about if there was some pattern to the colours? What would that look like? I might keep the image up somewhere for reference. And wait and see if the inquiry took off again. Connected learning episodes allow students to tune in, to make variations on a theme, create a base of shared experience for discussion.

In one of our K3 classes (5 and 6 year olds) recently, a boy, I'll call him Y, was making a similar pattern in an odd moment, this time out of pattern blocks. He often chooses to create patterns with manipulatives. I sat with him. He doesn't generally want to chat much or even answer questions; he sometimes has his own monologue about what he's doing. I knew I wouldn't be able to 'steer' his play much, but still I wanted to be there, maybe throw something into the mix. Here's what he made: 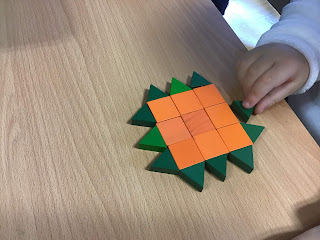 I admired his square and how he'd surrounded it with a border of triangles (might this be a good way into investigating perimeter with older students?) 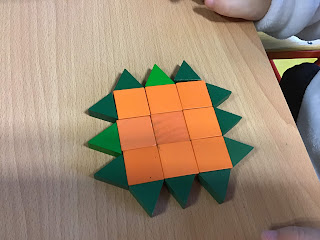 This seems like the essence of a lot of mathematical inquiry. First of all his attention is on a whole - the square surrounded by triangles. It's quite a satisfying whole. Then he wants to see how that extends. Does it just work for his particular case, or is there a general pattern? I got the iPad  out and recorded what he'd done. I also started making the ones he'd broken so we could see them all together.

Concepts here:
As a teacher, in a playful child-initiated situation, I want a light touch. I want to understand his interest, the unspoken 'question' he's answering for himself, and do what I can to enhance that inquiry, including if necessary, staying at am's length!

I did direct Y's attention to the pattern of numbers of triangles in the whole family afterwards: 4,8,12,16,20... but I don't think he was that keen on me 'directing' anything!  I didn't push it, knowing that if we valued his 'question', his beginning, this was something that could be a focus later. 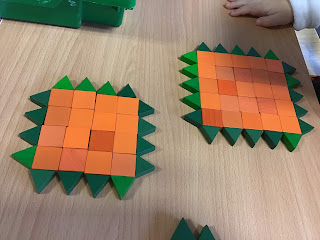 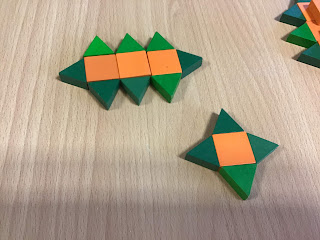 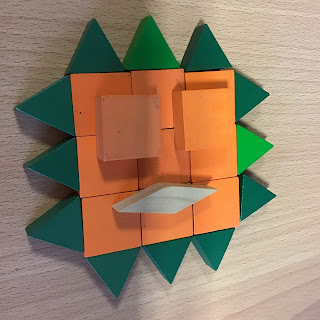 I enthused about his work a little and posted it on Seesaw. A few weeks later, I popped into his classroom and saw that he was making the same patterns. And another time, he made it with Polydron. 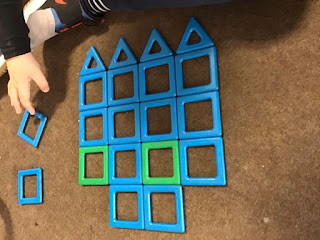 It was obviously something that Y was getting satisfaction returning to.

This process - of actively returning, of varying, of building on previous experience - is so much part of the process of mathematics - whether it's child-directed play, or teacher-led investigation. I would love all our teaching to centre on and respond to this process of inquiry, whether it be with a big explicit question, or as in Y's case, a small implicit question.
Posted by Simon Gregg at 08:40 2 comments: