Over the holidays I've been reading David Graeber and David Wengrow's The Dawn of Everything, A New History of Humanity. 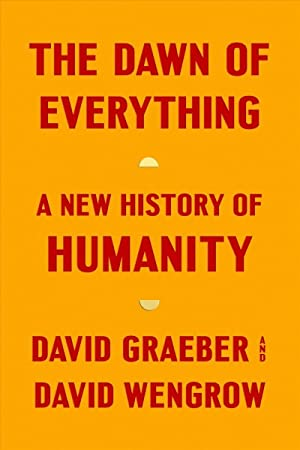 It's a big book, full of fascinating  and momentous ideas about the dawn of civilisation. One of the big things it does is to question evolutionary ideas about a progression from hunter gatherer innocence in small groups evolving to agriculture, to cities, to states.
There were huge sites built by hunter gatherers. There were cities all around the world that don't seem to have had kings or queens, but ran their affairs through discussion and deliberation. There were cultures that valued freedom highly and went to great lengths to avoid having that freedom taken away.
In fact some of those cultures might have brought ideas of freedom to the fore for Europeans.
Father Lallemant, a Jesuit missionary to the Huron in the early 17th century, wrote about the Huron in these terms:

From the beginning of the earth to the coming of the French, the Savages have never known what it was so solemnly to forbid anything to their people, under any penalty, however slight. They are free people each of whom considers himself of as much consequence as the others; and they submit to their chiefs only in so far as it pleases them.

The Jesuits naturally found that this 'wicked liberty of the savages' made it harder for them to submit to their authority.
Published account of indigenous Americans and their not always favourable view of Europeans were popular reading in Europe. One such account, Louis Armand, Baron de Lahontan's Curious Dialogues with a Native of Good Sense who has Travelled, published in 1703, amounted to a critique of European life, from the point of view of the Huron chief, philosopher-statesman Kandiaronk.

Lahontan: This is why the wicked need to be punished and the good rewarded. Otherwise, murder robbery and defamation would spread everywhere, and, in a word, we would become the most miserable people upon the face of the earth.
Kandiaronk: For my own part, I find it hard to see how you could be much more miserable than you already are. What kind of human, what species of creature, must Europeans be, that they have to be forced to do good, and only refrain from evil because of fear of punishment? ...

Kandiaronk saw the Europeans as lacking in both freedom and equality. Graeber and Wengrow propose that views like this from outside Europe helped shape demands in Europe for 'Liberté, Egalité, Fraternité'.
Graeber and Wengrow refer to three primordial freedoms - freedoms that are often taken away when a sovereign emerges:
Naturally, I think of education in terms of some of the themes of the book, freedom in particular. School can be an institution where all those freedoms are almost completely removed.
But - and I'm thinking of the kind of play-based setting that we work in with young children - they can also be places where those freedoms are valued.
I was struck by a tweet by Ben Mardell that shows some teacher documentation of some Pre-K students talking with their teacher:

Ricardo: What does freedom mean?
Ms Hannah: That's a good question Ricardo. I'm glad you asked that.
Children's responses -
- It means you can play!
- You can move around and run.
- You can finally stop what you HAVE to do.
- When someone comes to play and you say yes.

The book has made me see freedom more specifically, and also as a value that in various times and places, sometimes in complex societies, in cities even, has been guarded jealously. Some cultures went to great lengths to make sure they could travel and be welcomed elsewhere, and to avoid arbitrary power emerging. These things are well worth guarding with our youngest students.
And that last freedom - to create and transform social relationships... I would like to have more situations where the students genuinely, as a group as well as between pairs, have more opportunity to make the most of this freedom.
Posted by Simon Gregg at 13:33 2 comments: