I've asked if we can order stacks of Cuisenaire rods for the K3 classes - I really hope we can, there's so much I want to try out with young children (have a look at Sonya Post's lovely series of posts for the kind of thing I'm thinking of).

I'm still rereading Madeleine Goutard's Mathematics and Children, and I'm really looking forward to trying some of her ideas out with younger children.

I've posted about her work before, for instance in my post Can students ask - and answer - vast abstract questions, without being taught? Madeleine Goutard on Free and Conquering Minds and Cuisenaire rods.

What she seems to do, to link in children's play (particularly with Cuisenaire rods) and provoked-but-independent mathematical writing with the discovery, contemplation and exploration of generalisations in arithmetic is just what I need, we need.

I want to post a longer selection from her. If you prefer, just skim and read my bolded parts:

But when a new notion is being introduced or its new signs used, it is wise to wait until these appear in the spontaneous work of children before preparing systematic exercises. In fact this appearance is the signal that the notion is being integrated. In addition, by so doing, children are inventing their own exercises on this new subject and showing that they understand it. If we use their inventions in the formula­tion of the first exercises we help children understand at once what the rules of the game are.

Hence it is of paramount importance for the teacher to examine carefully children's inventions if he wishes to give his class a tailored education, well-adjusted to the level of awareness reached by them. Instead of satisfying themselves with marking and correcting, the teachers could on the one hand draw from such inventions many ideas useful in expanding their teaching, and on the other leave to the children themselves the correction and appreciation of their work or that of their fellows. Whenever the free compositions are not considered at the conscious level they tend to degenerate into repetitions and do not show from one series to the next the progress that we have been able to present above. Free expression is usually considered a luxury that one should encourage but not as the main stream of the work, which remains entirely the exclusive monopoly of the teacher.

For the experienced teacher all the lessons can have their starting point in the children's suggestions. When the children's own thoughts are driving the lessons forward a natural rhythm is evolved in which the various phases of the activity are harmoniously articulated. The challenge is thrown open, ideas are pooled, individual suggestions are gathered, a collective examination of the various proposals is carried out, followed by constructive criticism and evaluation which lead to fruitful awarenesses and to objective estimations which in their turn serve as the starting point for new projects, new realisations, new exercises, and so on.

In my experience the children's creations only become brilliant when the teacher is deeply involved in them and can give them the right response. Personally I have read a large number of children's productions and have learnt a great deal from them. Children do not tire of composing if they are in an appreciative environment where their works are recognised and valued. They learn to appreciate the work of their fellows and to enter into dialogue with reality and with their contemporaries.

During a series of seminars conducted at a University I made students work in the following direction: I would take some expressions from the spontaneous productions of their own pupils and we would enquire into what made them of interest to us and what could be done with them. They would then take these suggestions to their class, experiment with them and report on what they found as a result of this conscious effort of analysis. Discussion followed the experiments.

Here are some of these expressions (a number of which appearing uninteresting at first sight) as well as a summary of the follow-ups.
A girl of 6 had written 8+8+8+8-(7+7+7+7)=4. From this expression followed proposals to alter the number of 8's and of 7's; then the difference between the two numbers chosen (8 and 6, 9 and 5... ). Using their rods the class found that the given expression and the following were equivalent:

I'm getting more of a sense of how Goutard worked, the toing and froing between child and manipulatives, child and symbols, child and teacher, teacher and children. It's something I recognise from when a sequence of lessons goes well - like our recent work on Beatriz and Maria's fraction squares.

I wonder how that class found the equivalence of the expressions with the rods? Something like this maybe? 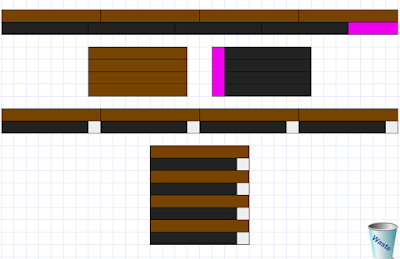 Goutard's method is a precursor to many of the "dialogic" approaches that we see in the #MTBoS. She's spotting the work of one student that will bring the whole class on. In using the student's work she's sure that it's something that arises out of the students' current understanding, and she's also emphasising that this progress is in their hands, is a joint enterprise between class and teacher. She's making the work of the class a collaborative inquiry. In my mind it's something like this: 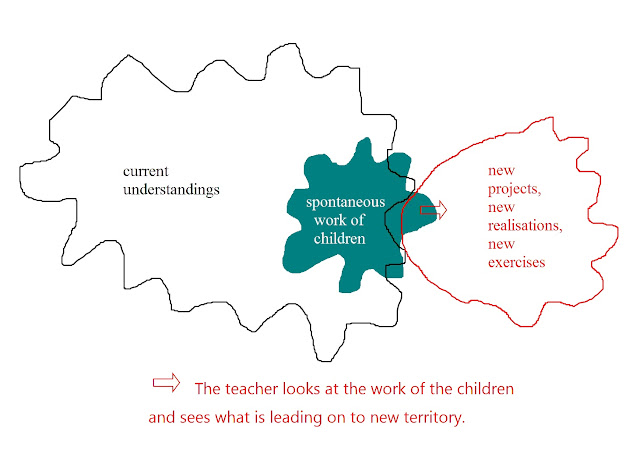