The Greeks, Geometry and Proof

As we begin the PYP, we're trying things out. We've got some initial ideas of our own, but we're looking for ideas from the students that we can follow up on. We want them to be genuinely following an inquiry that they're interested in, or better still, that they have originated. But what follows are some initial ideas that could serve as a series of six or so lessons.

Rosy and Rachel, my colleagues in Year 5, are planning a unit on myths, focussing on the Greeks. I'm so pleased that they're using Hugh Lupton and Daniel Morden's retelling of The Odyssey as a starting point. A few years back my class got a lot out of that book (see some products on that year's blog). If I did it again, I'd definitely use Peter Worley's The If Odyssey to get to some great philosophical themes in the Odyssey too.

But Rosy was thinking whether it might be a thing to link in with the geometry that the Greeks did in ancient times. She asked me about it, and here  are my thoughts about where I might start. I've not done these lessons before, but now I want to!

As I say, I haven't done this sequence before. What I'm trying to lead to is the idea of proof. I've pared down Euclid, to try and find the simplest possible starting points. But maybe you can think of an easier or better way of doing it? Maybe you've had some experience with this? Please post a comment!

I think I might introduce the topic with this image, asking, of course, What do you notice? What do you wonder? I might also tell the story of the Delian Problem.

I think I would introduce students to the tools the Greeks used for geometry – get the compasses and rulers out and make something artistic with circles.

I would make things in GeoGebra too. Let’s do a little exploring of this brilliant tool! 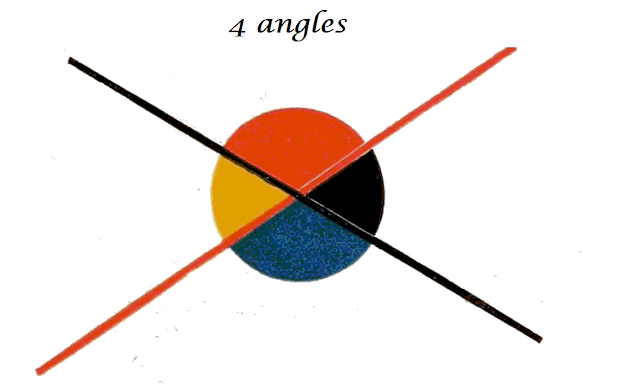 Will someone say something to the effect that some of those angles are the same? Perhaps…

You could then write this up as eg. “Maria’s Claim”.

Return to Maria’s proof. Could anyone say how her claim might be proved?

Show them Euclid’s book (I’ll lend it to you).

The Greeks developed the idea of proving something, of being completely sure.

Each proof in the book rests on other ones, like bricks in a house, going back down to the things Euclid said were obvious. (We worked on proving a little last year - example) 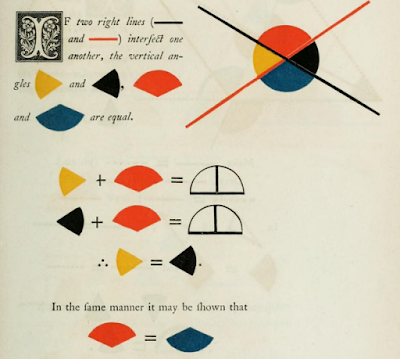 Look at it for a while together & see if anyone can see what’s going on in this proof.

(You could tell them that ∴ means “therefore”.)

It might be best for them to actually play with physical angles, arranging them – maybe they could do a video of how they know it’s true? Fraction circles would do the job well.

What do children notice / wonder about this one? 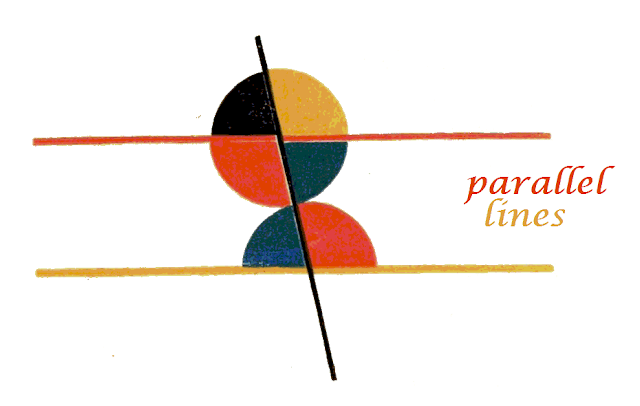 Hopefully, eg, that the two red angles are equal.

Perhaps they could have a big copy on paper to cut up & see if they can show that this is so.

(Could make a poster, or video, or just demo to class)

Look at this image: 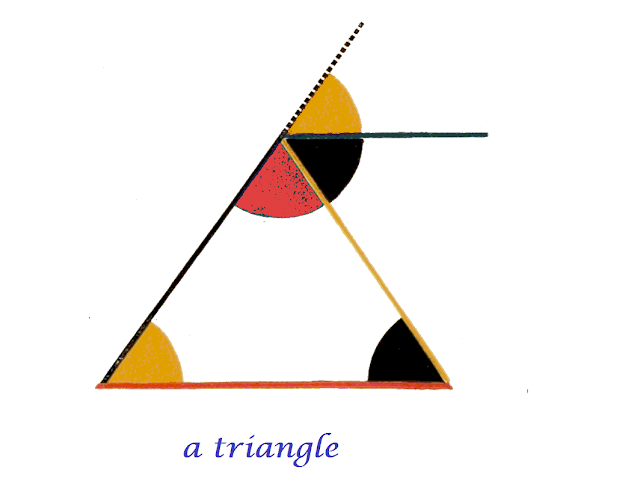 Here, there’s the idea that the angles inside a triangle add up to the angles on a straight line, 180°.

How might the students go towards proving this? What they’ve done with the previous two images might help. Another route would be to get everyone to make a different triangle on A4 paper. Colour the three corner angles different colours. Photocopy it so there are three copies altogether.

They could then cut the three out and arrange the triangles next to each other. If they put the three different-colour corners together, they should line up on a straight line.
Posted by Simon Gregg at 06:09