Mike Flynn's Beyond Answers has a nice long list of general claims primary students might make in math class (p158-9): 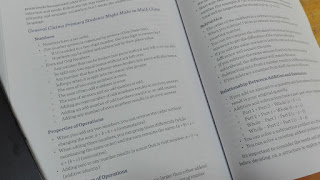 As Mike says, these structures in numbers might come up incidentally, or the teacher might take a dive into one in particular, according to the interests and needs of the class.

I feel like his list should be more widely available, and expanded upon, so that together we're really looking out for when students come to these structures.

In class I'm on the look out for, if not articulated general claims, at least general explorations. When I see one, I take a picture and bring it to the class's attention. They're getting used to this. On Friday I was getting the class to hold up successively (if w=1) the Cuisenaire rod that's 10, 8, 6, 4... "The even numbers!" someone says. BT comments that you add 2 to each of the even numbers to get to the next. We look at the odds; it's the same.

So how do these general explorations come about? The students know there's a certain latitude in tasks. You know by now that I use Cuisneaire rods a lot. Because they preserve numbers intact and visually show their relationships, they're particularly suited to uncovering and showing structures in our numbers.

For example, back in January (when we were still calling the rods by colour letters; now we're revisiting some of the same situations with numbers) EW wrote how different trains were equivalent to trains of just white rods.

So we look at this, and I ask the class to try their own similar equal trains. 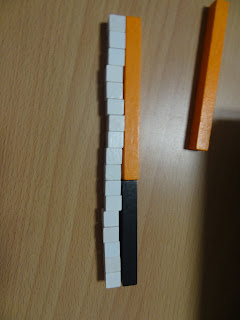 It's natural to try the reds after that. 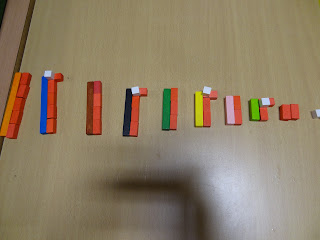 What generalities are there here, now that we're onto using nuimbers?

Some numbers are and some are not equivalent to a certain number of twos.

Another time, AN made this series of equal trains: 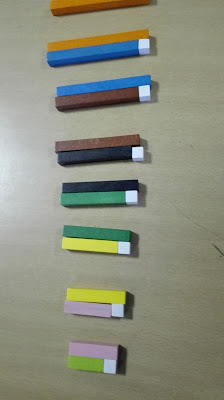 When you add 1 to an amount, the result is the next counting number.

So, on Friday we laid the staircase of even numbers on the carpet and checked the common difference is two with red rods. We did the same with the odd numbers. We moved on, looking at pairs of rods that equal 11. But a few children were still playing with the odds and evens...

"Look, I've made a Which One Doesn't Belong!" 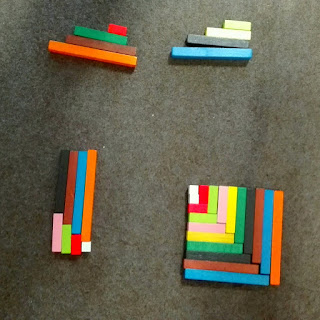 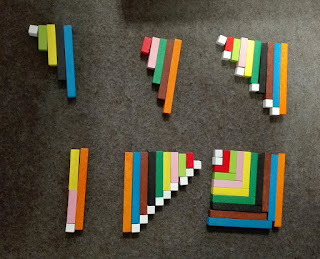 Mike is emphasising MP7 - Look for and make use of structure. Here's his summary (p154):


How do you look out for generalisations, implicit or spoken? How do you nurture them, promote them?
Posted by Simon Gregg at 05:09