Pentominoes Which One Doesn't Belong?

I often ask my students to find all possible shapes made of five squares - the pentominoes. There are twelve of them. Another good task is sorting them into two groups according to some criterion.
I saw John Golden was getting students to do this.

Ways to divide pentominoes. What are their rules? pic.twitter.com/3E8pQMNWiv
— John Golden 🔗 (@mathhombre) September 11, 2017

And it made me think a Which One Doesn't Belong might be the thing to uncover other criteria for sorting. I made one with my wooden set at home. 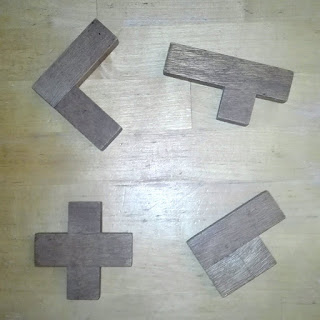 What do you think? Which one is the odd one out and why?

Normally I don't think it's useful for me to propose answers, because what I value most of all in this task is the maths basic, creativity - looking for yourself and deciding for yourself how to compare them. It's this that makes me return to WODBs weekly.

But Christopher Danielson does something useful in his teacher guide to Which One Doesn't Belong? He gives the background to the shapes on each page of his shape book, and talks through likely responses.

You could run WODBs without knowing background. You could just record students' responses and it would still be useful. This is especially true if you're happy with uncertainty, thinking on your feet and coming back to things later; but it helps to have thought through the possibilities. You're more likely to understand what the students are seeing, and the significance of it.

So, let's touch on some of the responses you might have to this. I got lots on Twitter that helped me to see a lot more than I had before, thanks to Vincent Pantoloni, John Golden and his students, Becky Warren and Rod Bogart.

One of the nice things about using photos rather than drawings is that you get extra aspects you might not have been thinking about. In this case, the shapes are made out of straight strips of wood; you can see the joins. So you could sort them by how many strips are needed.

How many 'ends' are there? These are squares with only one neighbour. How many 'branches' are there? These start at squares with three or four neighbours. And is there a part where four squares are touching in a square? How long are any branches (or 'appendages', or 'limbs')? How long are the longest straight lines? How many pieces could you leave by removing one square?

Number of vertices. Number of side lengths. What size rectangle would it fit into?

Negative spaces: what shapes are left by the concave part of the shapes? In all but the top right, these concave shapes are isosceles triangles.

Convex/concave: The bottom right is the only convex shape; the others are concave.

[edit: Why did I write that - it's not true. Thank you Justin Lanier for noticing, and for helping me build something out of this. The bottom right is 'more convex' in some way; as Justin puts it, it has the 'least amount of notch'!

I see. Are you thinking something like "least amount of notch", aka "fewest number of squares to add (or subtract!) to make convex"?
— Justin Lanier (@j_lanier) September 17, 2017

Perimeter: The bottom right pentomino doesn't have a perimeter of 12.

Orientation on the page/screen: the X is the only one lined up with the edges of the image.

Pentomino addition: You can think of pentominoes being made by adding a square to a tetromino.

The bottom left pentomino can't be made from the L-tetromino by adding a square. You could go back to trominoes and think which can be built from those.

I made another WODB with my classroom pentominoes: 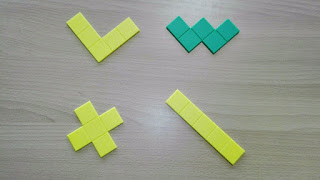 'Seeing' the whole shape from inside it: If the shape were the shape of a room, is there a point you could stand in to see the whole room? Not for the W.

And there are no doubt plenty more. Maybe you could comment with other ways that you see?

It all goes to show that a simple image can be the starting point for students' own ideas - there are a lot to choose from, and they don't have to be second-guessing the teacher or the maker of the image.
Posted by Simon Gregg at 15:05 No comments:

Email ThisBlogThis!Share to TwitterShare to FacebookShare to Pinterest
Labels: wodb

We've just finished our first week of the new year, me and my class of five-year olds.

I've been thinking about Graeme Anshaw's blog post where he asks, What type of maths inquiry do we employ the most and the least in our classrooms?

He outlines these different forms of inquiry:

How do we find a place for open inquiry, where the students are asking the questions? More specifically, how do I do it, with my class, especially as most of the students don't have English as a first language?

For young children like mine, how they ask questions is often through their play. If I pile these up here, what would it look like? How could I arrange them more satisfyingly?

Here's a couple of students arranging wooden blocks in a line, then arranging frisbees and bats on top. 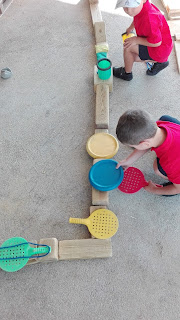 You need lots of components to get good patterns going - we need more bats and frisbees! We've just got more magnetic Polydron and the building is impressive. Here's T asking how he can transform shapes, and what happens if he uses triangles to add star-points to other shapes?

Others were enjoying our new straws and connectors, starting with squares, building cubes, and then puting them together to produce a tall tower: 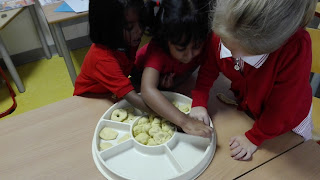 and playing with Cuisenaire staircases:

EL made this last series of staircases. Actually she had to make it three times. The first time someone slid some rods into it, and it was too late to repair, the second time it was standing up and got knocked over during lunch time. I made sure there was time when she could get it finished and photographed.

I think it's important that everyone recognises that there is maths implicit in all these things. Many people still think of maths as needing to be about counting or numbers or sums, and feel anxious that these should happen. But these things are there in the physical things that the students are doing already! And also:
There are also the social skills being exercised in much of the group and paired work. All of the IB PYP social skills are needed at various points:
Of course, it's great to connect all this making to language, to talking about what we've done and reflecting on it, and ultimately to symbols too. And to start to abstract from the particular. But I don't want to be hasty with this. A lot of the student's creations are so pregnant with mathematical possibilities that I want to (as Helen says) re-propose them to the class, perhaps along with what they said to me at the time. I'm also this year, annotating photographs of the students' creations with them.

And there will be time to start making connections to some of the big concepts in maths. Like the way Graeme starts with the big central idea, "Our base 10 number system evolved for a variety of reasons and led to place values that extend infinitely in both directions." What these big ideas are varies from list to list. I see Jo Boaler and her team have just developed some: 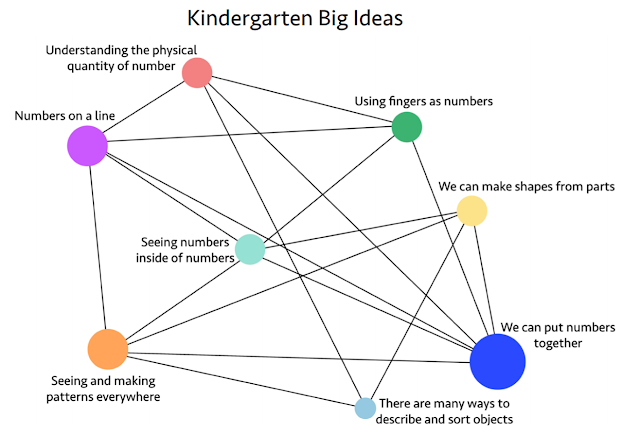 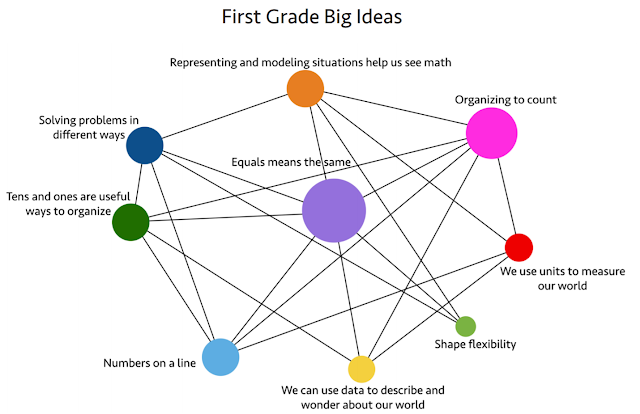 Others have come up with big overarching ideas that stretch right over the years. Like Mike Askew's: 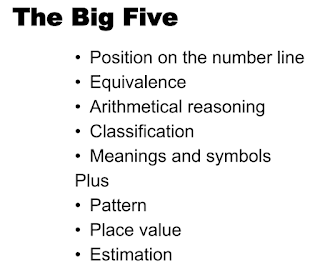 In addition to considering this, in the IB PYP we work with transdisciplinary themes, that bring out the connections between traditional subject areas. Including maths of course.

So, I'm hoping, for instance, to connect, for our current unit of inquiry on transport systems, the train track building that's going on with some discrete maths. How places are linked, how are nodes linked by edges. Moving from very concrete things like trains and cars, onto networks, reasons for networks, connections. I tried this last week, asking students to make roads between every pair of two houses, and after a few asking them to guess how many roads there will be: 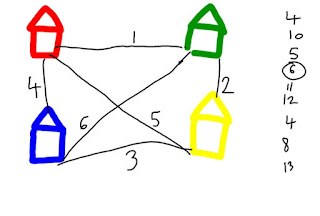 What happens if the roads are not allowed to cross?
— Justin Lanier (@j_lanier) September 8, 2017 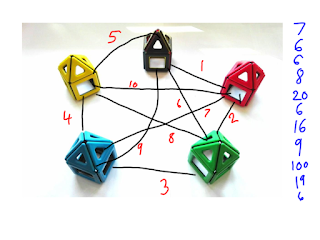 What I really want to keep though in all this, while trying to develop the big ideas, is the wonderful, individual, confident play and creativity.
Posted by Simon Gregg at 08:56 6 comments: