So, last week we all met our new classes for 45 minutes. Mine will be all five years old in September, what up until now we've called Year 1, but come September, we're calling Kindergarten 3 because 1. we're being less British, and 2. we're being much more play-based.

So, after an introduction ("Do you want to call me Mr Gregg, or Simon?") and a song, I introduced - of course - the Cuisenaire rods. I asked them what they thought they were for, and they said making pictures of various kinds, not a mention of maths. I said they were sometimes used for patterns and numbers, and one boy counted to twenty in response.

So - of course - I said, "Make anything you like out of them, pictures, patterns, whatever you like!"

And they did!
We'll return to this, and explore lots more patterns.
A lot of people made things in 3D, like for instance this house:
I wonder what other-size chairs we can make...?
And here's an interesting rectangle... 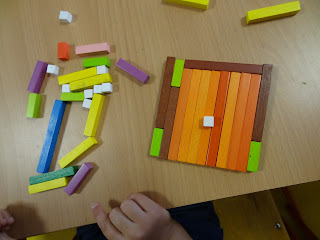 Here is the beginning of lining things up, measuring them up against each other neatly. We're going to follow up with a lot of this.

When I look at these pictures, and all the others, I see the kind of things the children are interested in. They like houses, and roads, car parks and castles. Some made abstract patterns of rectangles, or spelled out their name. And I see lots of starting points for further exploration.