We've just  completed four lessons that involve jumping, sliding and swapping. This was Julie's idea; not something we'd tried before, but full of great maths. They all have a playing phase; and then with three of them there was the phase of looking at number patterns. (Click on the heading links to go to the Year 4 blog for more detail.) 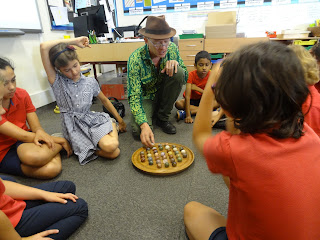 This was one we just played, on different-shaped boards. The aim is to end up with just one ball. You remove balls by jumping over them into an empty space (not diagonally though). In hindsight we could have looked at how many moves are necessary on different-sized boards. I'd have to investigate this a bit myself first, but maybe there's mileage in this.

I mentioned to the class that my solitaire board can't be played down to just one ball if the empty space is in the centre. Perhaps I might have shared the proof of this as it's a really simple satisfying one. I don't know. I'll share it with you anyway.
If assign three colours to the holes like this, each colour is present twelve times (and so with an even number of each colour): 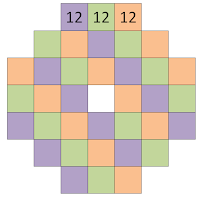 Whenever there's a jump the number of each colour either increases or decreases by one. For instance: 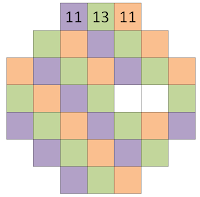 And so there are now odd numbers of each colour. As this continues, there will always be all even, or all odd numbers of all the colours. So, there can never be just one ball left - one odd, and two even colours.

Isn't that neat? And very similar to the kinds of proofs I was thinking abaout with Cuisenaire rod filling. 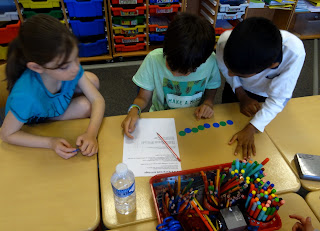 There were three things about this activity (source), which involved swapping pairs of cats and dogs to sort them into all-cat  and all-dog groups.

This time in pairs, again inventing notation. We used Cuisenaire rods to represent the disks. 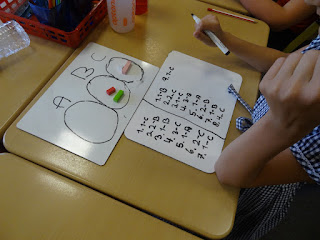 There was a different pattern of numbers that emerged here, this time powers of two, minus one: 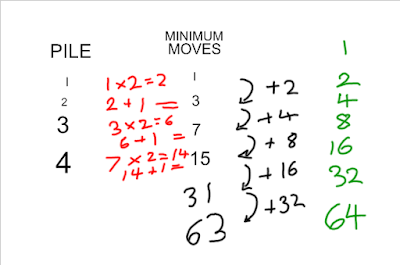 This powers of two really grabbed the class, and we took them up, and down to fractions together. 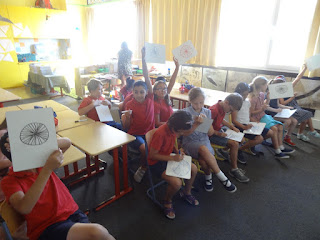 A few people wanted to carry on doubling while the rest of the class were doing some coordinates work, and I let them go for it: 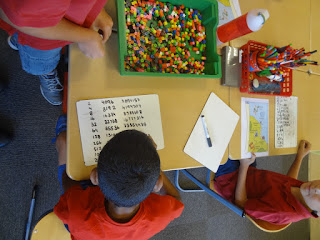 Here frogs may either slide one place, or hop over one frog into an empty space; the aim being to have the pinks on the right and the blues on the left. There's a great nrich app that helps with this, but I also printed out some lilly pads for work with counters. 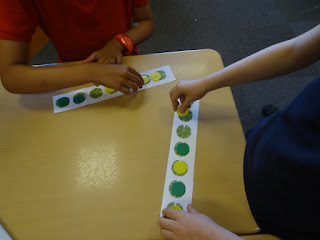 This puzzle was perhaps the hardest for the class to solve, but they kept at it!
Again we looked at the number pattern for different numbers of frogs, this time based on square numbers. Wanting to link in to our coordinates work I used desmos to tabulate and graph our results for the minimum number of moves for one frog at each end, two frogs at each end, and three frogs at each end. Then we looked at the three points on the graph, saw that they weren't in a straight line, and estimated where the curved line would cross the line going up from four on the x axis. I then added in the line. Samyak saw that you could get the progression by adding successive odd numbers: 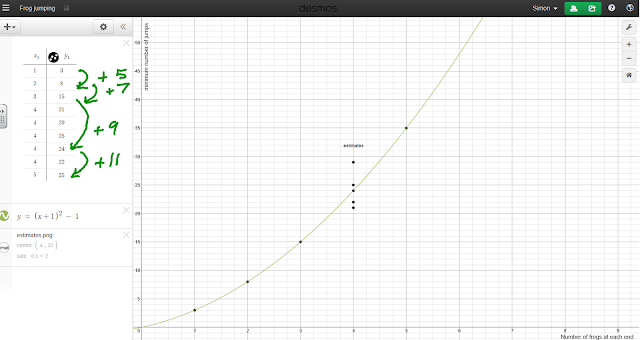 I've now, following a really thought-provoking discussion with Paula Beardell Krieg, decided that I want to drop in this kind of graphing more often, to really get the feel of how we do this and the relationships look. Estimating was a good idea, and that it went well makes me feel like we could do this with more curves.

All-in-all, I was surprised how much maths we got from these four puzzles. I knew they would be playful and need lots of hard thinking, but the different number patterns that we uncovered added enough to make it really worthwhile. You could do this with older year groups and take it further.
I'll be on the lookout for puzzles like this which embody different number sequences, and probably use these activities next year.
Posted by Simon Gregg at 03:03