The ladder of abstraction

I'm interrupting my list to write about this. It's sort of in reply to a tweet from Tracy Johnston Zager, though I suspect I haven't answered the question in exactly the way she intended:

No, actually this chime can be part of the list.

7. Climb up and down the ladder of abstraction

I've been reading Roy Peter Clark's entertaining and instructive book Writing Tools: 50 Essential Strategies for Every Writer over the summer (link to free podcasts of this on iTunes). One of the 50 strategies is "climb up and down the ladder of abstraction". Here's a snippet:


The ladder of abstraction remains one of the most useful models of thinking and writing ever invented. Popularized by S. I. Hayakawa in his 1939 book Language in Action, the ladder has been adopted and adapted in hundreds of ways to help people ponder language and express meaning.
The easiest way to make sense of this tool is to begin with its name: the ladder of abstraction. That name contains two nouns. The first is ladder, a specific tool you can see, hold with your hands, and climb. It involves the senses. You can do things with it. Put it against a tree to rescue your cat Voodoo.
The bottom of the ladder rests on concrete language. Concrete is hard, which is why when you fall off the ladder from a high place, you might break your foot. Your right foot. The one with the spider tattoo.
The second noun is abstraction. You can’t eat it or smell it or measure it. It is not easy to use as a case study. It appeals not to the senses, but to the intellect. It is an idea that cries out for exemplification.

Here's Hayakawa's illustration of his ladder: 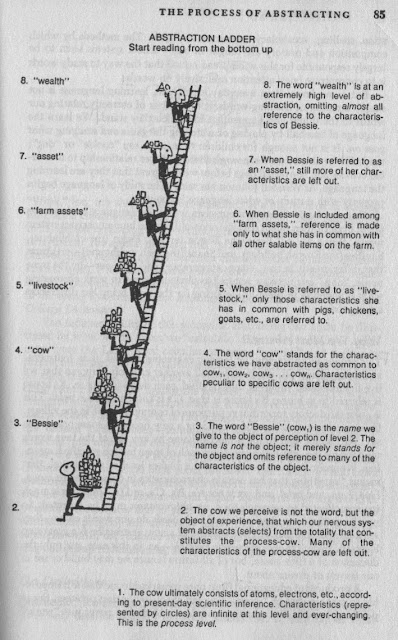 This fits very well with the way I like to teach. Say in maths, I want the kids to use stuff they can touch or be physically part of. To take an example that I think works really well, I'll get them using the Cuisenaire rods to make their own patterns, and then I want them to take the numbers inherent in those patterns, then beyond that, the relationship between the numbers, and if possible to abstract that relationship into algebraic form. I'm quite prescriptive about what I want them to do, but hopefully the limitations are creative, because I want them to be creative.

If you haven't read Richard Feynman on why there is no science education in Brazil, do. He was astonished at how little teachers went down the ladder again from abstract to concrete.


"I didn't see how they were going to learn anything from that. Here he was talking about moments of inertia, but there was no discussion about how hard it is to push a door open when you put heavy weights on the outside, compared to when you put them near the hinge – nothing!"

The architect Zaha Hadid is designing the new maths gallery for the London Science Museum, a building I spent a lot of time in as a kid. She has a maths degree, and she uses maths as a place to find new abstract forms for her buildings. She was also inspired by the abstract mathematical paintings of Kazimir Malevich.

So, she's using abstract mathematical forms and ideas, and, quite literally, making them concrete:

"When I came to do architecture people said you must know how to add. There is that aspect to maths, of course. But there is another that was of interest to me and that was abstract thinking, and that was when I realised how important that degree was."

To me, that's thought-provoking.
Posted by Simon Gregg at 12:47

Email ThisBlogThis!Share to TwitterShare to FacebookShare to Pinterest
Labels: ladder of abstraction